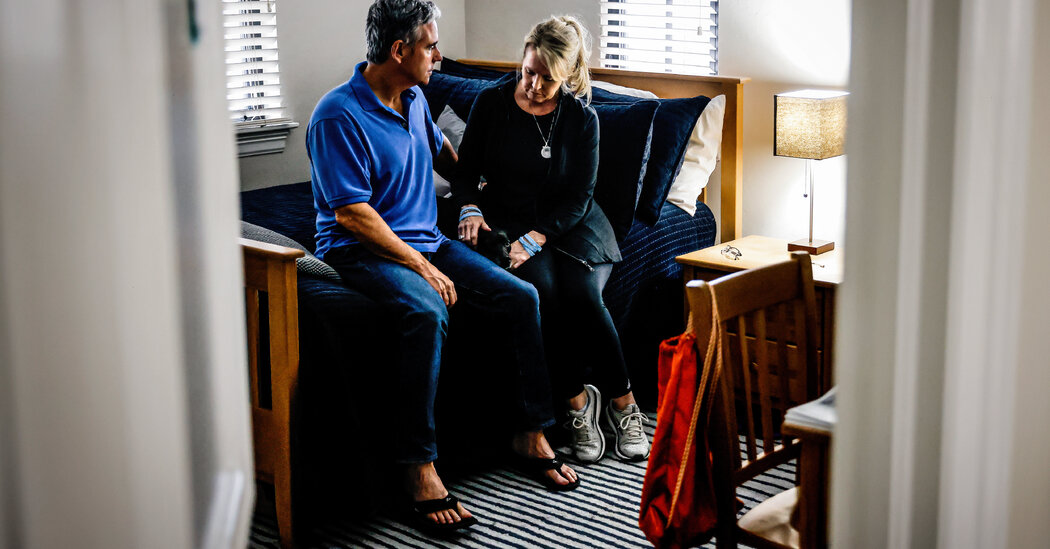 PARKLAND, Fla. — Sometime after 1:30 a.m. in a hotel conference room, the law enforcement officer’s eyes — even before his words — told Tom and Gena Hoyer that their youngest child was gone, killed in a mass shooting at Marjory Stoneman Douglas High School.

They remember so little about the ride home. Almost as soon as they entered their Parkland house, Ms. Hoyer walked upstairs into Luke’s second-floor room, untouched since the morning hours when he had been getting ready for school. She sat on the edge of his unmade bed next to the night stand where he had left his prescription glasses. She was in Luke’s room at this hour because she believed that if she did not do this task right now, she might never.

Two thoughts entered her mind. One was clear but painful to contemplate: How could their family go on without Luke? The other was much less formed and so much harder to answer: What now? That question would crystallize over the months and years into something else: What does justice mean?

the sentencing trial last week, the lead prosecutor, Michael J. Satz, described the violence that was unleashed upon the high school, naming the victims one by one and the number of times each had been shot. Videos taken inside classrooms were shown to jurors, and though the audience could not see the video images, everyone in the courtroom could hear the audio of booming gunfire, screams and pleas for help.

trial is only for sentencing, it is expected to stretch over several months. Defense lawyers will lay out any mitigating factors, like a troubled childhood and mental health issues, that might make the case for sending the gunman to prison for life rather than executing him. A death-sentence recommendation from the jury must be unanimous. If the gunman is sentenced to death, he would join more than 300 inmates on death row in Florida.

“Like the other families, we have had to deal with so much grief for so long,” Ms. Hoyer said. Referring to the couple’s daughter and surviving son, she said, “What we want is to make sure Abby and Jake are OK and we are being good parents to them. I feel like our future needs to be focused on them and their lives, while always remembering and loving our Luke. I have to believe he would want that, too.”

One of her greatest struggles, she said, has been finding a way to balance “seeing Luke to the finish line” with a trial that inevitably brings the harrowing details of her darkest day hurtling back. At times, the pain feels physically unbearable, burrowing in her stomach.

She sometimes finds relief in the quiet of Luke’s room, sitting on his bed as she had on that first night. There is something comforting about the space, which is nearly preserved, full of remembrance photos and plaques and jerseys, his old books and his backpack, which now has an evidence tag. There is a card from a mother whose son was killed in the Virginia Tech shooting 15 years ago.

The Hoyers have come to think of the Parkland shooting as more than a personal loss. It was the larger story of the intractability of American gun violence and school safety.

Not long after Luke died, they did something to reflect his interests: establishing the Luke Hoyer Athletic Fund, which pays for sports-related costs for foster children in Broward County.

Then they helped to form Stand With Parkland, an advocacy group representing most of the families who lost loved ones in the shooting. The Hoyers describe themselves as moderate Republicans who grew up around guns but don’t own any. Collectively, the group supports increasing mental health screening and support, school safety reform and responsible gun ownership, which includes “red-flag” laws that allow the authorities to take guns away from people who are shown to be a danger to themselves or others.

The couple considers the Bipartisan Safer Communities Act recently passed by Congress as a good first step. That package incorporates legislation — named for Luke and a classmate, Alex Schachter, who was also killed in the shooting — that establishes a federal clearinghouse to identify and share school safety best practices and recommendations.

Luke’s final resting place is in a cemetery in Broward County, chosen because it reminded Ms. Hoyer of her parents’ hometown, Joanna, S.C.

Luke Thomas Hoyer, 15, was the youngest of the family’s three children. The family called him “Lukey Bear.” He loved chicken nuggets, the Clemson Tigers and the Miami Heat. He spent the summer before his freshman year perfecting a new curly-top hairstyle. Just shy of six feet, Luke had gone through a growth spurt in both height and confidence. He loved basketball, but in the months before his death he had turned to football, and planned to try out for his high school team.

Luke’s parents are both comforted and shattered by ordinary memories — the way he watched ESPN every morning while eating his breakfast; or the way he raised one eyebrow when he was having an epiphany; or the long hours it took for him to mow the grass because he took so many breaks.

Sometimes the Hoyers are able to imagine what the future might have been like for Luke. They imagine the milestones that were just a few months and years away: a driver’s license; a high school prom; high school graduation (they received his diploma, awarded posthumously, last year); college admission; college graduation.

Now Luke comes to Ms. Hoyer in her dreams. Almost always, she is cupping his cheeks, telling him how much she loves him.

Three men were indicted in the death of the notorious gangster James (Whitey) Bulger, who was beaten to death four years ago in a West Virginia … END_OF_DOCUMENT_TOKEN_TO_BE_REPLACED

Dr. Connolly and Dr. Mott live in the North Baltimore neighborhood of Homeland, known for its strong public schools and colonial architecture, which … END_OF_DOCUMENT_TOKEN_TO_BE_REPLACED