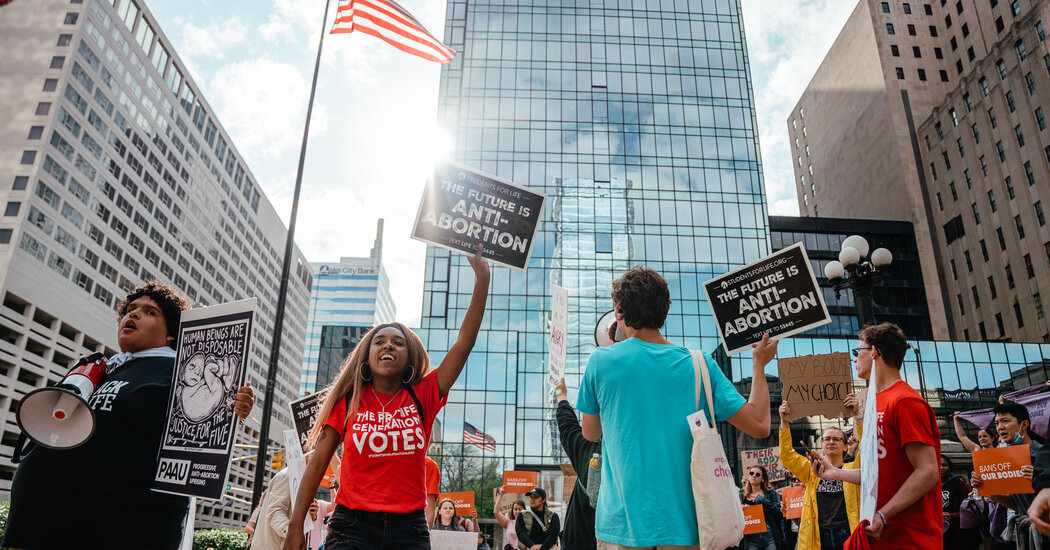 Even after five decades of argument about abortion in the United States, the most contentious question newly at the forefront is a very basic one: What is abortion?

Major medical societies, and medical billing codes, define abortion as any procedure that terminates a pregnancy — whether that pregnancy is wanted or unwanted, whether a woman is seeking the procedure to clean out her uterus after a miscarriage, or because of a dire fetal diagnosis, or to terminate a pregnancy that she had not expected.

Anti-abortion lawmakers and groups disagree, arguing that it’s an abortion only if the woman or her medical provider elects to end the pregnancy. This generally means that terminating a pregnancy in a dire medical situation is acceptable, while terminating an unwanted pregnancy is not.

Roe v. Wade established a constitutional right to abortion, this was mostly a semantic dispute. But in the aftermath of the Supreme Court’s decision to overturn Roe, simply defining the word abortion has taken on new political, legal and medical consequences.

States are struggling to define what they will and will not allow. Doctors, too, are grappling: those in states that now ban abortion say they have stopped providing the procedures because violations of the law can result in lengthy prison terms, large fines and the loss of a medical license.

on the defensive in midterm election campaigns. Under fire, they have tried to carve out new definitions of abortion and blame doctors for misunderstanding.

faced outrage in August when a hospital denied an abortion to a woman carrying a fetus that doctors said would be born without a skull. One of the state’s three bans allowed abortion to end “medically futile” pregnancies. But the fetus’s condition, acrania, was not specifically included on a list of exceptions allowed under the law.

Jeff Landry, the state’s attorney general, blamed doctors, saying, “it is the hospital that has created ambiguity where there is none.”

“Assuming such a diagnosis was properly certified, the removal of the unborn child is ‘not an abortion,’” he wrote in a letter to the hospital’s general counsel.

who sponsored one of the state’s abortion bans, told a local television station that the procedure the woman had been seeking was not an abortion: “This woman is seeking a medical procedure for a pregnancy that is not viable outside of the womb.”

The woman ended up traveling roughly 1,400 miles to a Planned Parenthood clinic in New York, where she terminated her pregnancy with an abortion.

Medical societies and doctors who support abortion rights say defining abortion by intent is a distinction without a difference, because any termination proceeds with the intent to end that pregnancy. And the procedures are the same regardless of whether a woman has had a miscarriage or seeks to end an unwanted pregnancy: Surgically, an abortion involves dilation and curettage, or dilation and evacuation; a medical abortion is done with pills.

the state’s ban on abortions after detection of fetal cardiac activity — generally around six weeks of pregnancy — does not include any exception for rape victims.

However, Catherine Glenn Foster, the president of the anti-abortion group Americans United for Life, testified in Congress that “it would probably impact her life and so therefore it would fall under any exception and would not be an abortion.”

Anti-abortion groupsargue that states have carefully crafted bans to make sure that anyone who needs an abortion for medical reasons receives one.

“That’s not the same as elective abortion, abortion that is done for the primary purpose of producing a dead baby,” said Dr. Donna Harrison, the chief executive of the American Association of Pro-Life Obstetricians and Gynecologists.

Arizona and Wisconsin, make no exception for that. (The terms for abortion and miscarriage are so intertwined that in those laws, written in the 19th century, abortion is defined as “procuring a miscarriage.”)

The language around pregnancy has long been subject to fierce debate. In the early 2000s, anti-abortion groups successfully pushed for a federal ban on an extremely rare termination procedure that is typically done in the second trimester — known medically as intact dilation and evacuation — by rebranding it “partial birth abortion.”

But in the new debate over defining abortion, abortion-rights groups say they themselves may have unintentionally created confusion.

Even when Roe was the law of the land, hospitals often set up committees to decide whether abortion was ethical, or justified as “therapeutic.” So the abortion-rights groups set up free-standing clinics to try to expand access. Dr. Jamila Perritt, an obstetrician-gynecologist and the president of Physicians for Reproductive Health, said that encouraged the belief that abortions done at clinics were not the same as those done in doctors’ offices or hospitals where a woman was ending a pregnancy because of cancer treatment, or because of a fetal abnormality.

“I had patients tell me, ‘I’m not like the rest of them, they were careless,’” Dr. Perritt said.

The Hollywood Reporter said she “confessed” it — inspired the actress Jenny Mollen to announce that she, too, had abortions to treat two miscarriages.

Anti-abortion groups and lawmakers argued that Ms. Teigen was wrong to call the procedure an abortion, and accused her of changing her words for political gain.

LifeNews.com wrote that doctors did not “purposefully kill her unborn son,” and Ms. Teigen and her family “did not want him to die and mourned his death even though he never lived outside the womb.”

Anti-abortion groups don’t always agree on the definition of acceptable abortion. Dr. Harrison, for example, said she does not believe that the procedure is the right response to rape, or for a fetus diagnosed with a deadly anomaly. While the pregnancy of the 10-year-old Ohio girl was “a horrible social disaster,” Dr. Harrison said, “that pregnancy was not a threat to her life.” Similarly, she said, fetuses with what she termed a “life-limiting diagnosis” can be carried to term in perinatal hospice care.

Abortion-rights supporters say the debate should not be about what exceptions to allow in state laws, because those carve-outs can’t account for every possibility; they may even aggravate the stigma around abortion and pregnancy loss.

“We’re creating this narrative that some people deserve care and some people don’t,” said Dr. Kristyn Brandi, the Darney-Landy fellow at the American College of Obstetricians and Gynecologists. “In medicine, we don’t have that divide based on reason or the divide based on situation. It’s more, the pregnancy needs to end for whatever reason, and we will provide that care because that’s what the person in front of us needs.”

AUSTIN, Texas--(BUSINESS WIRE)--As the first multifamily management company to be recognized in the Public Relations and Marketing Excellence Awards, … END_OF_DOCUMENT_TOKEN_TO_BE_REPLACED

There have been whispers of cooling housing and rental prices in the San Francisco Bay Area, but that hasn't yet translated into practical, noticeable … END_OF_DOCUMENT_TOKEN_TO_BE_REPLACED

Cars pass in Independence Square at twilight in Kyiv, Ukraine, Monday, Oct. 31, 2022. Rolling ... [+] blackouts are increasing across Ukraine as the … END_OF_DOCUMENT_TOKEN_TO_BE_REPLACED