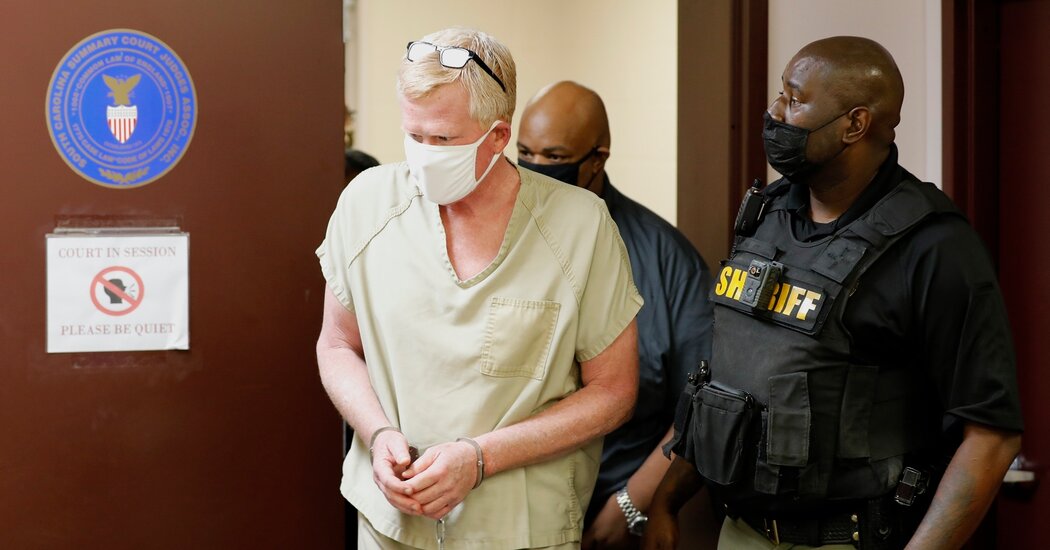 A long-running mystery over who killed the wife and son of Alex Murdaugh, an heir to a powerful legal dynasty in South Carolina, could be headed for a resolution this week as the police indicated they planned to indict Mr. Murdaugh in the murders, one of his lawyers said on Tuesday.

Mr. Murdaugh had already been facing an array of charges of fraud and theft that resulted in his arrest in September 2021 and a wave of subsequent indictments. But no one had been formally accused in the deaths of Maggie Murdaugh, 52, and Paul Murdaugh, 22, who were fatally shot at the family’s rural hunting estate in Islandton, about 65 miles west of Charleston.

One of Mr. Murdaugh’s lawyers, Jim Griffin, said state police investigators had informed some of Mr. Murdaugh’s relatives that they planned to seek an indictment against Mr. Murdaugh for the murders this week. A spokeswoman for the South Carolina Law Enforcement Division, which has been investigating the case, would not confirm the lawyer’s account.

sprawling saga of mysterious deaths — including the unsolved killing of his wife and son — and allegations of multimillion-dollar swindles. Here’s what to know about the case:

The “Murdaugh Murders” remain unsolved. The fatal shooting of Maggie Murdaugh and Paul Murdaugh in 2021 rocked South Carolina’s Lowcountry region, where the Murdaugh family’s powerful legal dynasty originated. On July 12, 2022, the police indicated they planned to indict Alex Murdaugh in the slayings of his wife and son.

The Murdaughs are powerful. The family has dominated the legal profession in a rural swath of the state for more than a century. For nearly 90 years, the post of chief prosecutor for a five-county region was held by a Murdaugh. And for even longer, the family’s law firm has been one of the state’s leading tort litigation firms.

There was a botched suicide plot. A day after he was forced out of his family’s law firm for misusing funds, Alex Murdaugh reported that he had been shot in the head. He soon admitted that he had actually asked a former client to kill him because he wanted to leave his older son, Buster, with a $10 million insurance payout. Mr. Murdaugh survived.

Mr. Murdaugh has been accused of swindling millions. The lawyer was arrested on Oct. 14, 2021, and charged with stealing millions of dollars from a settlement intended for the children of a housekeeper who died at the family’s home in 2018 after falling on the front steps.

But in the months that followed the double-murder, Mr. Murdaugh’s life unraveled drastically.

The law firm founded by his ancestors reported that Mr. Murdaugh had been stealing money from the firm and fired him, after which, the police said, he concocted a bizarre scheme to have one of his distant cousins shoot him on a deserted road. The cousin, Curtis Edward Smith, fired a shot that did not hit Mr. Murdaugh, and Mr. Murdaugh was later charged with fraud while Mr. Smith was charged with assisted suicide and other crimes.

Last month, prosecutors filed additional charges against Mr. Murdaugh and Mr. Smith, accusing them of laundering millions of dollars over several years as part of a distribution network for the painkiller oxycodone.

Mr. Murdaugh has also been charged with stealing millions of dollars from clients and other people, including from the family of a housekeeper for the Murdaugh family who died after falling on the steps of their home early one morning in 2018. Mr. Murdaugh admitted last month that he had wrongly pocketed the settlement money and owed $4.3 million to the sons of the housekeeper, Gloria Satterfield. After having been briefly released following his initial arrest, Mr. Murdaugh returned to jail in October on charges related to the settlement with the housekeeper’s family.

issued an order disbarring Mr. Murdaugh over his theft from the Satterfield family.

Mr. Griffin said Mr. Murdaugh continued to proclaim his innocence in the deaths of his wife and son.

At the time he was killed, Paul Murdaugh had been facing charges of boating under the influence after he was accused of driving a boat into a bridge, killing Mallory Beach, a 19-year-old passenger, after a night of drinking. Ms. Beach’s family had sued the Murdaughs, and their lawyer had been trying to force Alex Murdaugh to provide details about his finances before his wife and son were killed.

The killings turned intense scrutiny back to the boat crash — including over whether Paul Murdaugh had received favorable treatment from the police — and raised new questions about the Murdaugh family.

The state police opened an investigation into the death of Ms. Satterfield and, last month, said they planned to exhume her body. Investigators have also been re-examining the death of a 19-year-old man, Stephen Smith, who was found dead along a road about 10 miles from the Murdaugh home in 2015. No one has been charged in those deaths, which were both considered accidents.

MIAMI--(BUSINESS WIRE)--Intelli Smart Homes, the leading smart home technology company, has been recognized as one of America’s fastest-growing … END_OF_DOCUMENT_TOKEN_TO_BE_REPLACED

Customers outside a Walmart store in Torrance, California, US, on Sunday, May 15, 2022. Walmart Inc. is scheduled to release earnings figures on May … END_OF_DOCUMENT_TOKEN_TO_BE_REPLACED

The past few years have been brutal on homebuyers' budgets. Would-be buyers have been priced out of some of the most desirable neighborhoods thanks to … END_OF_DOCUMENT_TOKEN_TO_BE_REPLACED