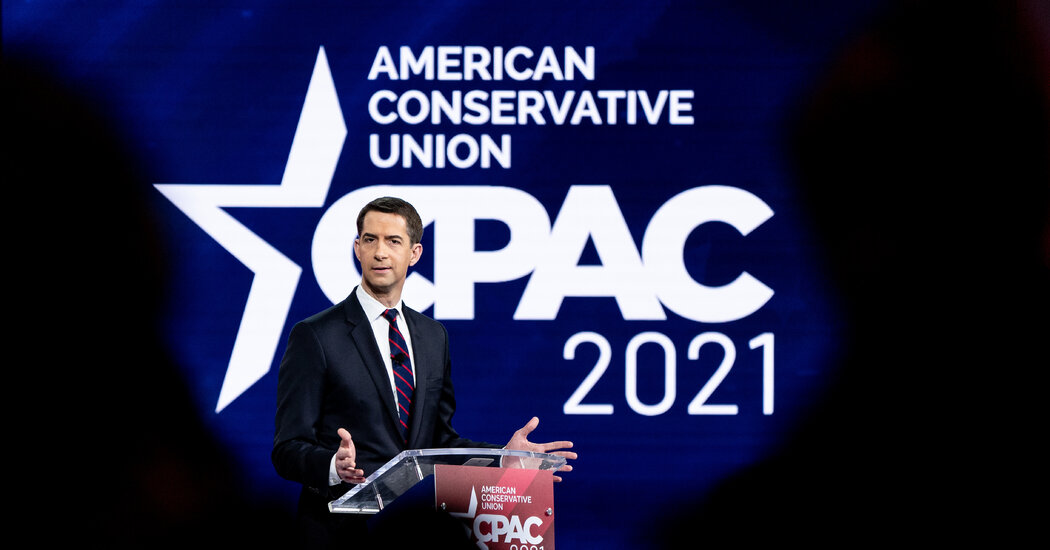 Armed with more than just a senator’s voting record, governors often have an early edge in presidential contests. But in a moment when almost every prominent Republican — from governors to lawmakers to Fox News personalities — has adopted Mr. Trump’s pledge to “fight,” conservative attendees said they now wanted tales from the front lines.

It was the difference between the dutiful laughter when Senator Ted Cruz of Texas cracked jokes about wearing masks in restaurants, and the uproarious applause when Ms. Noem boasted about refusing to shut down her state. She had not just criticized the recommendations of infectious-disease experts like Dr. Anthony S. Fauci; she had actively defied them.

Mr. Hawley made strides this weekend for similar reasons. While Mr. Hawley, the junior senator from Missouri, also delivered riffs on cancel culture and immigration, he distinguished himself by reminding the audience of his objection to the Electoral College certification of Mr. Biden’s victory. He framed himself as a martyr, describing how a “woke mob” had tried to “cancel me, censor me, expel me, shut me down.”

For Mr. Dyess, the speech affirmed his belief that Mr. Hawley had a “backbone.” He also appreciated that the senator seemed to have the right enemies: “You know,” he said, “the media is now really on Josh Hawley.”

Mr. Pompeo had the advantage of being one of the few Trump administration officials on the agenda at CPAC. Former Vice President Mike Pence and Nikki Haley, Mr. Trump’s former ambassador to the United Nations, both declined to attend. While some attendees shrugged at their absence, others said they would have appreciated hearing from Mr. Pence.

“I do think he should’ve stood up for Trump,” said Mindy Salinas, 41, a CPAC volunteer and a member of the Los Angeles Hispanic Republican Club, referring to Mr. Trump’s urging his vice president not to certify Mr. Biden’s election, a constitutional duty. “But it would’ve been nice for him to give his views on what life was like being vice president of our country.”

Mr. Pompeo, who served as both secretary of state and C.I.A. director, thus had a wide berth for emphasizing his role in an administration that he argued had “truly upended the status quo.”

Kohl's announced Friday that it is terminating talks to sell its business, saying that retail environment has significantly deteriorated since the … END_OF_DOCUMENT_TOKEN_TO_BE_REPLACED