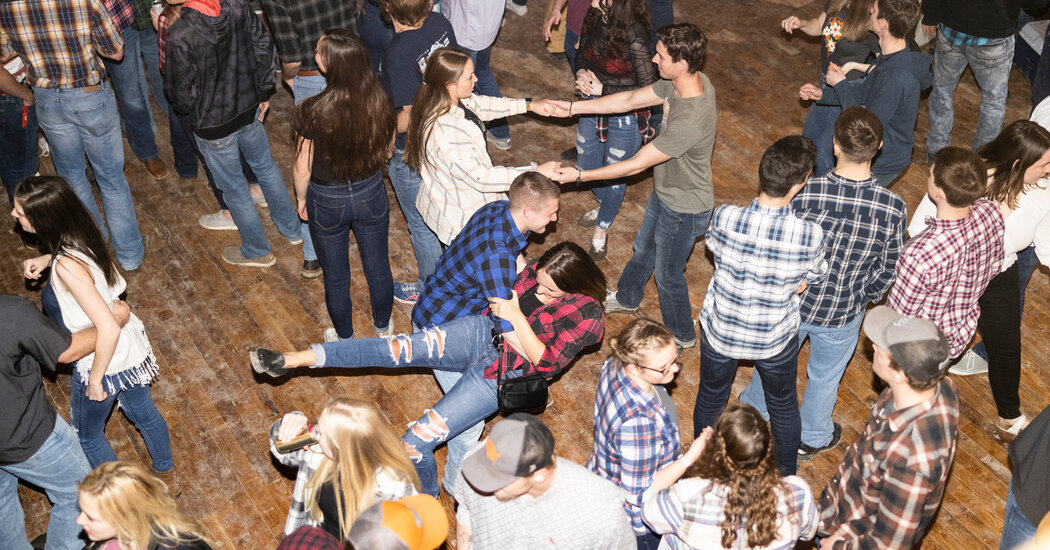 With climbing vaccinations and dwindling virus cases, Americans from Honolulu to Sumter, S.C., have begun to return to the things they did before — the nights out, religious services and annual traditions that made life richer. But after a year of isolation, it has all been a bit uncertain, both familiar and not quite.

“Even doing normal isn’t normal,” said Amy Holson-Schwartz, 37, who took her family to an annual sheepshearing event on a farm in Vermont that was canceled last year because of the coronavirus pandemic. She said it was odd to see other children’s uncovered faces in public and watched as her 18-month-old daughter, whose 10-word lexicon includes “mask,” gawked at other babies.

“She’s had no interaction with other kids,” Ms. Holson-Schwartz said.

Photographers for The Times documented Americans re-emerging in all 50 states in recent weeks. The approach to reopening has been much like the nation’s patchwork response to the virus: conflicting guidance, competing narratives and Americans left to gauge their own comfort levels.

Ashlee Wolsky, 23 and fully vaccinated, felt comfortable attending the reopening of Arthur’s Barn in Arthur, N.D., where revelers flipped one another over on the crowded floor of the honky-tonk. The old routine of dressing up to go out on a Friday night felt newly charged. “It had a different level of excitement that I haven’t felt before,” she said.

She delighted in seeing an older couple she recognized, dancing. “You don’t know anything about them, but it’s a familiar face in the barn,” she said. “It’s a touch of normal.”

McClurg jam moved their mountain music sessions outdoors. In November, cold weather and safety concerns halted the weekly jams that have been going for decades, but a warm spring brought the music back.

“There’s a lot of good musicians in these hills if you can just get ’em out,” said Alvie Dooms, far left.

several months, easing restrictions on crowd sizes and live entertainment have allowed many performers to return to familiar venues.

Greenwood Overcomes,” an opera marking the centennial of the massacre of Black people living in Tulsa’s then-affluent Greenwood neighborhood by a white mob.

restrictions on wind instruments in place, forcing some bands that played at the venue Favela Chic that night to change their usual lineup.

Kentucky Shakespeare’s celebration of the playwright on April 23, the anniversary of his death. The annual event was canceled last year.

8.2 million fewer jobs than at the start of the pandemic. The dizzying whipsaw of regulations forced many restaurants to limit capacity and often lay off staff members. Many restrictions are now being lifted, as they have in New York, where indoor dining capacity was recently increased to 75 percent.

Those changes will most likely mean more business for the food industry, but some safety precautions may remain, as they have in other industries.

food industry. Many restaurants drastically changed how they operated. Many others couldn’t survive. In some cases, people clamored for their favorite eateries to reopen, resulting in the kinds of clusters of Covid-19 infections that led to the initial lockdowns.

But, with increased vaccinations and restrictions rolled back in most states, Americans are breaking bread together again.

competitions to halt last spring. Play eventually resumed, sometimes with profound changes, like professional athletes retreating into “bubbles” meant to protect them from the threat of infection.

Convoluted regulations have begun to recede for younger athletes who often risked infection for the social, emotional and academic benefits of competition.

gyms are easing too. In Connecticut, where Ester Sanches-Naek ran on a treadmill in an empty Club Fitness, capacity limits were lifted in March. Still, few have returned to her gym amid a boom in outdoor running.

continuously since 1962. Until last year, the Akron championship races hadn’t been canceled since World War II.

drove many early infections. But ritual remained a powerful draw, especially in a difficult time, and the Supreme Court repeatedly struck down such restrictions. On April 9, the court struck down California’s rules against religious gatherings in private homes.

But after a year, grief and fear have begun to give way to optimism. There’s a path back now, to the lives we knew, to something closer to normal.

It’s a property that offers a unique open floor plan—plus a hot tub with a view.“It was a Methodist church located in a historic little area of St. … END_OF_DOCUMENT_TOKEN_TO_BE_REPLACED