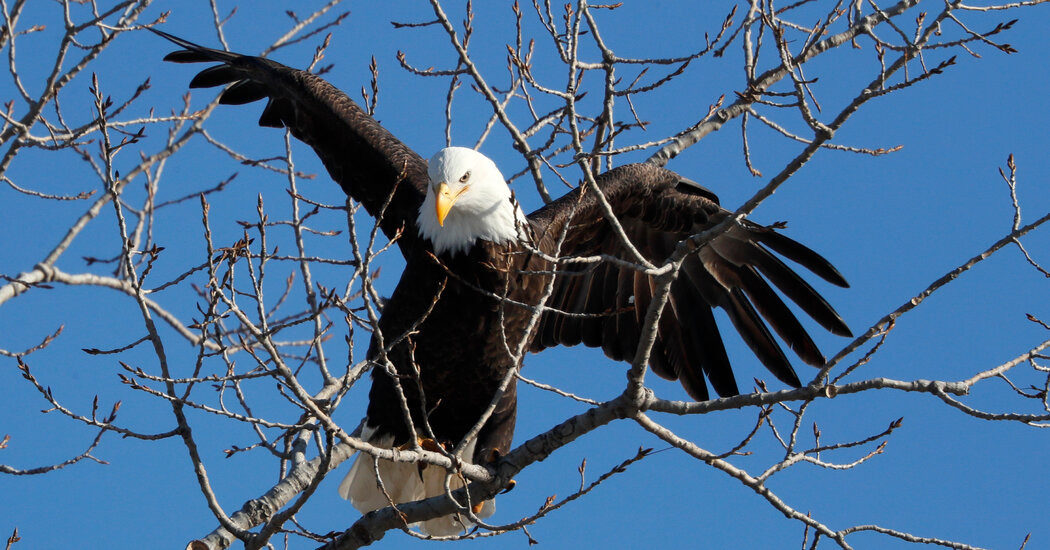 The bald eagle population in the lower 48 states has quadrupled since 2009, researchers said this week, underscoring decades of efforts to protect a species that was once on the brink of extinction.

There were an estimated 316,700 bald eagles in the lower 48 states during the 2019 breeding season, including more than 71,400 breeding pairs, according to a report issued on Wednesday by the United States Fish and Wildlife Service.

Deb Haaland, the secretary of the Interior, said at a news conference on Wednesday that the results were “truly a historic conservation success story.”

the first Native American to lead a cabinet agency. “Similarly it’s sacred to our nation as America’s national symbol.”

Martha Williams, a deputy director at the Fish and Wildlife Service, said in a statement that her organization would keep working with state and federal agencies, tribes, private landowners and others to ensure that the bald eagle population continues to increase.

Bryan Watts, a biology professor and the director of the Center for Conservation Biology at William & Mary, said on Thursday that the report reflected what he had seen in the Chesapeake Bay region, where the bald eagle population had been growing about 8 to 10 percent per year.

Researchers were able to include younger eagles and floaters — mature eagles that were unable to secure breeding territories — in the population estimate that was released on Wednesday, which they said they had not been able to do as effectively in previous studies.

considered a menace in Alaska. The government sponsored a bounty of 50 cents a bird, and later a dollar, leading to more than 120,000 confirmed killings. By the mid-20th century, all but a few hundred bald eagles were presumed dead, killed off largely by widespread use of the synthetic insecticide DDT. The bald eagle population reached its lowest point of 417 known nesting pairs in 1963, researchers said.

But through protection and conservation efforts, and the banning of DDT in 1972, the population was able to recover over the years. The bald eagle was removed from Endangered Species Act protection in 2007.

While many celebrated the increase in numbers, bald eagles in recent years have become a nuisance for poultry farmers hoping to raise a full, healthy stock, prompting many to apply for an eagle-depredation permit from the Fish and Wildlife Service.

“I really think that the population has reached a period where we are kind of moving beyond conservations restrictions,” Professor Watts said, adding that eagle populations in areas like Florida, the Great Lakes and the Pacific Northwest have been “raging” since the 1970s and 1980s.

Professor Watts said there were instances of eagles nesting as yard birds in many residential areas. “That wasn’t the case in the ’70s and ’80s,” he said. “In fact, we never could have anticipated they would do that.”

He does not see society reverting to a period where hunting bald eagles would be permitted, he said, adding that bald eagles are the United States’ national symbol. “I think they should be revered, respected and protected,” he said.

Asked if the report carried hope for other endangered and formerly endangered species, Professor Watts said it was an indicator of what can be accomplished when a culture collectively decides to value something.

“I hope that we will get back to the time where we recognize the environment as an important support structure for our society,” he said, “and we respect some of the species that are currently in decline.”

MIAMI — In a welcome but likely brief victory for supporters of abortion rights, a judge in Florida blocked a state law banning abortions after 15 … END_OF_DOCUMENT_TOKEN_TO_BE_REPLACED

NEW YORK--(BUSINESS WIRE)--Stake, which provides Cash Back and banking services to renters, announced today the completion of its $12 million Series A … END_OF_DOCUMENT_TOKEN_TO_BE_REPLACED

The Sacramento home where Ronald and Nancy Reagan lived during his tenure as governor of California has hit the market for $5 million.Built in 1929, … END_OF_DOCUMENT_TOKEN_TO_BE_REPLACED