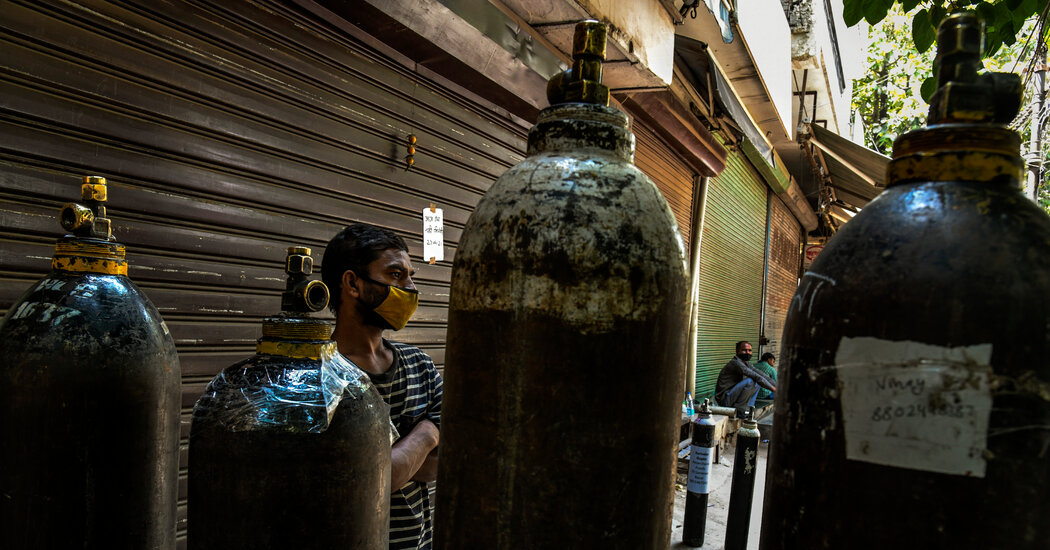 As California moves toward reopening, another crisis is unfolding halfway across the globe. India recorded about 410,000 coronavirus cases on Thursday, a new global high, and 3,980 deaths, the highest national daily death toll in any country outside of the United States. Experts believe the true number of cases and deaths is much higher.

As the crisis has worsened, many Indian-Americans are struggling to cope with the trauma unfolding back home, juxtaposed with a vaccination drive that has reached nearly half of Americans and anticipation of a “return to normalcy” by July 4. Many are watching friends and loved ones pass away from afar, unable to travel to see grieving relatives, while witnessing the breakdown of India’s medical system.

“I don’t know an Indian-American family in this country who hasn’t been affected in terms of knowing someone who has either died or been very, very sick,” Representative Ro Khanna, the congressman for California’s 17th district, said in a phone interview this week. “The scale of this is unimaginable. It’s not just affecting poor people or people in villages, it’s affecting the rich, it’s affecting the middle class, it’s affecting everyone.”

There are more than 712,000 Californians of Indian descent, according to AAPI Data, which compiled information from the U.S. Census Bureau. In recent days, many Indian-Americans have turned to fund-raising for oxygen and other necessary supplies for those in India, and pleading with state and federal officials to do more to close the vaccine gap. On social media, several have worked to gather lists of resources, whether that includes places to donate to grass-roots organizations or even translations of health care recommendations.

came out in favor of waiving intellectual property protections for coronavirus vaccines. The move would allow countries such as India to boost production and increase vaccine access.

“It’s really been heartening to see the Indian-American community come together and put aside any difference of politics or religion, and really just say: How do we help in this humanitarian situation?” Khanna said. The congressman said he had been in touch with constituents in Silicon Valley, hearing their concerns and pushing the private sector to help.

When the crisis in India began, Vinod Khosla, the co-founder of Sun Microsystems, pledged $10 million. Google has also pledged $18 million to provide oxygen and other supplies, while its founder, Sundar Pichai, has personally pledged $700,000 toward relief efforts.

Khanna emphasized, however, that the aid isn’t just coming from big corporations. “I’ve heard stories of ordinary citizens raising hundreds of thousands of dollars to get oxygen there, to help get equipment there, to get medical beds there,” he said. “It’s really just touching everybody.”

Several community organizations across California have also stepped up to help vulnerable and marginalized groups. Parivar Bay Area is partnering with local grass-roots organizations in India to support basic necessities for transgender people affected by the crisis. An initial GoFundMe page raised $10,000 in 48 hours. Anjali Rimi, who started Parivar in 2018 and identifies as trans, said the crisis hit home for her — her parents were hospitalized in India because of Covid-19 last year.

Dozens of Buddhist monastics hope the flower can signify healing amid the trauma of racial violence in the United States. On Tuesday, they came together for a national mourning ceremony in Los Angeles where they lit candles and honored ancestors. They also used thin paintbrushes to fill the fractures of a ceramic lotus with liquid gold leaf, following the Japanese artistic practice of kintsugi.

Priya Arora was born and raised in the San Fernando Valley, and graduated from U.C. Irvine. They are currently a social media editor on the Audience team, and also write about South Asian pop culture for The Times.

The Seattle Seahawks are very much still in the running for Baker Mayfield. (Photo by Stacy ... [+] Revere/Getty Images) Getty Images The Seattle … END_OF_DOCUMENT_TOKEN_TO_BE_REPLACED

(CNN) — Kim Kyung-seop recalls going to cheap bars after class with his friends, where they binged on as much makgeolli as possible. "You know the … END_OF_DOCUMENT_TOKEN_TO_BE_REPLACED