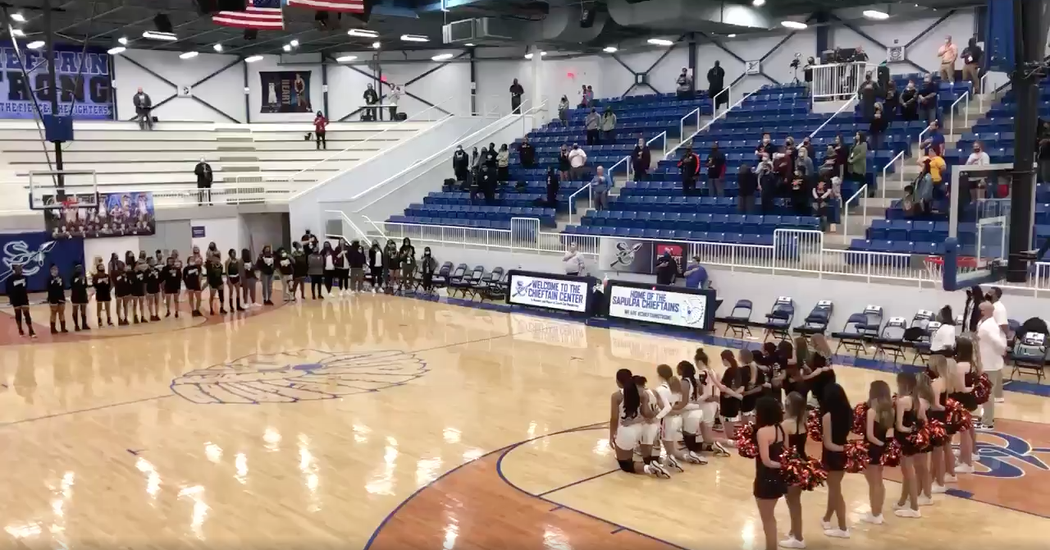 A sports announcer at an Oklahoma high school basketball game uttered a racial slur into a live microphone as players on the court knelt during the national anthem on Thursday night, prompting widespread outrage and condemnation.

In a video clip that quickly went viral, the announcer could be heard cursing as he saw the players of the Norman High School girls’ basketball team kneel just before the start of a quarterfinal state tournament game against Midwest City.

“They’re kneeling?” he says, apparently not realizing that he and the rest of the broadcast team could still be heard. Then he utters the racial slur, adding, “I hope they lose.”

“They’re going to kneel like that?” he continues. “Hell, no.”

Frankie Parks, a teacher at Norman High School and the team coach, posted a video clip on Twitter on Friday morning, condemning the announcer’s comments, which infuriated local leaders around Norman, a city of 123,000 people about 20 miles south of Oklahoma City.

Mr. Parks wrote. “This is why they kneel.”

The announcer, Matt Rowan, apologized in a statement to The Frontier, a nonprofit news organization that covers Oklahoma. The organization described Mr. Rowan as the owner of a streaming service that broadcast the game.

The website for Mr. Rowan’s company, OSPN, appeared to have been taken down as of Saturday morning. Mr. Rowan did not immediately respond to requests for comment on Saturday.

In his statement, Mr. Rowan, who described himself as a married father of two children who goes to a Baptist church, said he had Type 1 diabetes.

Mr. Rowan said that had it not been for his sugar spiking, “I do not believe that I would have made such horrible statements.”

the mayor of Norman and the Police Department, as well as N.F.L. players like Kenny Stills and Gerald McCoy, who posted a picture on Twitter of the high school players kneeling in support.

“These young women are tough,” Sgt. Neelon Greenwood of the Norman Police Department said in a statement. “They are fighters. The comments made against them will add fuel to their fire.”

In paired statements, both organizations said the broadcast team would not be used during the rest of the tournament.

DONETSK REGION, Ukraine — Between the cracks of mortar fire and the metallic bangs of Russian self-detonating mines, Yurii, a Ukrainian Army medic, … END_OF_DOCUMENT_TOKEN_TO_BE_REPLACED

SAN FRANCISCO — Cleve Jones has lived in the Castro neighborhood for nearly 50 years, almost from the day he graduated from high school in Phoenix and … END_OF_DOCUMENT_TOKEN_TO_BE_REPLACED