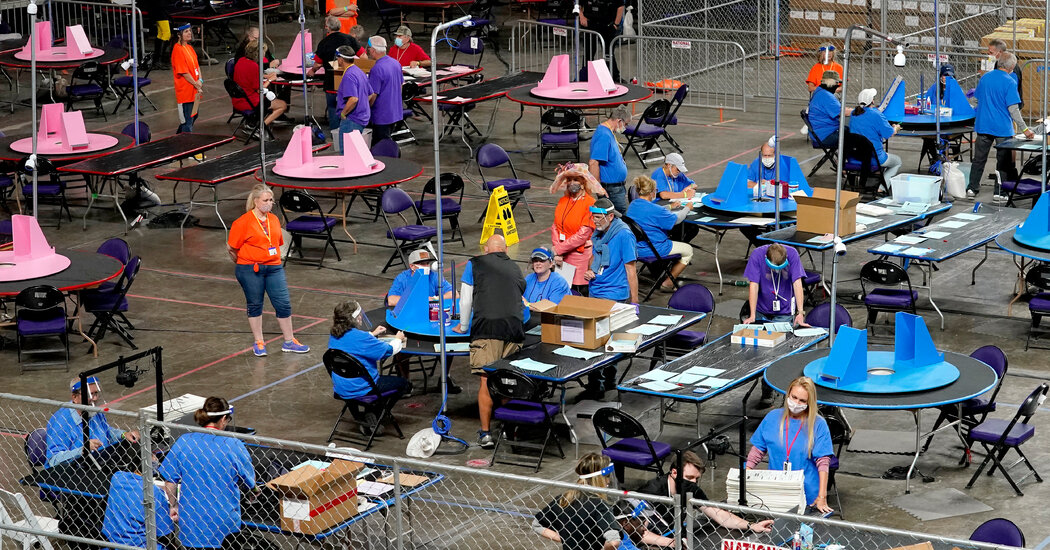 Directly outside the Veterans Memorial Coliseum near downtown Phoenix, the Crazy Times Carnival wraps up an 11-day run on Sunday, a spectacle of thrill rides, games and food stands that headlines the Arizona State Fair this year.

Inside the coliseum, a Republican-ordered exhumation and review of 2.1 million votes in the state’s November election is heading into its third week, an exercise that has risen to become the lodestar of rigged-vote theorists — and shows no sign of ending soon.

Arizona’s Secretary of State Katie Hobbs noted the carnival’s presence outside the coliseum when she challenged the competence and objectivity of the review last week, expressing concern about the security of the ballots inside in an apparent dig at what has become a spectacle of a very different sort.

There is no evidence that former President Donald J. Trump’s narrow loss in Arizona’s presidential election in the fall was fraudulent. Nonetheless, 16 Republicans in the State Senate voted to subpoena ballots in Maricopa County, home to Phoenix and two-thirds of the state’s vote in November, for an audit to show Trump die-hards that their fraud concerns were taken seriously.

dogged by controversy. Republicans dominate the Maricopa County Board of Supervisors, which supervised the election in the county. They said it was fair and accurate and opposed the review.

After a week marked by mounting accusations of partisan skulduggery, mismanagement and even potential illegality, at least one Republican supporter of the new count said it could not end soon enough.

“It makes us look like idiots,” State Senator Paul Boyer, a Republican from suburban Phoenix who supported the audit, said on Friday. “Looking back, I didn’t think it would be this ridiculous. It’s embarrassing to be a state senator at this point.”

Civil-rights advocates say political fallout is the least of the concerns. They say the Arizona review is emblematic of a broader effort by pro-Trump Republicans to undermine faith in American democracy and shift control of elections to partisans who share their agenda.

federal law requires record to be kept intact under penalty of a fine or imprisonment. Some of the most serious questions involve the management of the review.

On Wednesday, Katie Hobbs, the Arizona secretary of state, charged that the review was being conducted with uncertified equipment and that ballot counting rules were “a significant departure from standard best practices.”

She wrote: “Though conspiracy theorists are undoubtedly cheering on these types of inspections — and perhaps providing financial support because of their use — they do little other than further marginalize the professionalism and intent of this ‘audit.’”

After her claims drew a number of death threats from Trump supporters, Gov. Doug Ducey of Arizona ordered state police protection this past week for Ms. Hobbs, a Democrat.

in an interview on the Phoenix PBS news outlet, she applauded the role of One America News in supporting the review and said the Senate had no role in choosing Mr. Kern or others who counted votes.

“I don’t know why he’s there or how he got there, but that’s one of the people that was selected, and that is what it is,” she said. “I don’t know that it’s a great thing, to be honest.”

And she said that the news media had blown concerns about the objectivity and management of the review out of proportion.

“They talk about conspiracy theories,” she said, referring to reports that the review is examining ballots for evidence of bamboo fibers and watermarks baselessly said to be signs of fraud. “But I tell you what, there’s almost a reverse conspiracy theory to demean this audit.”

She suggested that her support of the review would be proved right in the end.

“I think we’ll find irregularities that is going to say, you know what, there’s this many dead people voted, or this many who may have voted that don’t live here any more — we’re going to find those,” she said. “We know they exist, but everybody keeps saying, ‘You have no proof.’ Well, maybe we’ll get the proof out of this so we can fix those holes that are there.”

More common is the notion that the review has become an alarming exercise in undermining faith in America’s elections.

One expert on election law, David J. Becker, founder of the Center for Election Administration and Research in Washington, said Ms. Fann’s assurances about the integrity of ballots and other records appeared unlikely to satisfy the Justice Department.

“There’s no question that contamination of ballots and records is an ongoing issue that raises serious concerns about federal law,” said Mr. Becker, a former lawyer in the Justice Department’s voting rights section. “We’ve never seen anything like this before, where some haphazard effort allows some unknown out-of-state contractor to start riffling through ballots. I think it’s pretty clear that the response does not resolve concerns about ballot integrity.”

In fact, it was after Mr. Johnson won the high jump that Hitler left the stadium in Berlin, before Mr. Johnson received his medal, even though earlier … END_OF_DOCUMENT_TOKEN_TO_BE_REPLACED

Listed for $2,975,000 at the beginning of the month, this architectural delight in Virginia Beach had its price trimmed by $125,000 last week. Located … END_OF_DOCUMENT_TOKEN_TO_BE_REPLACED