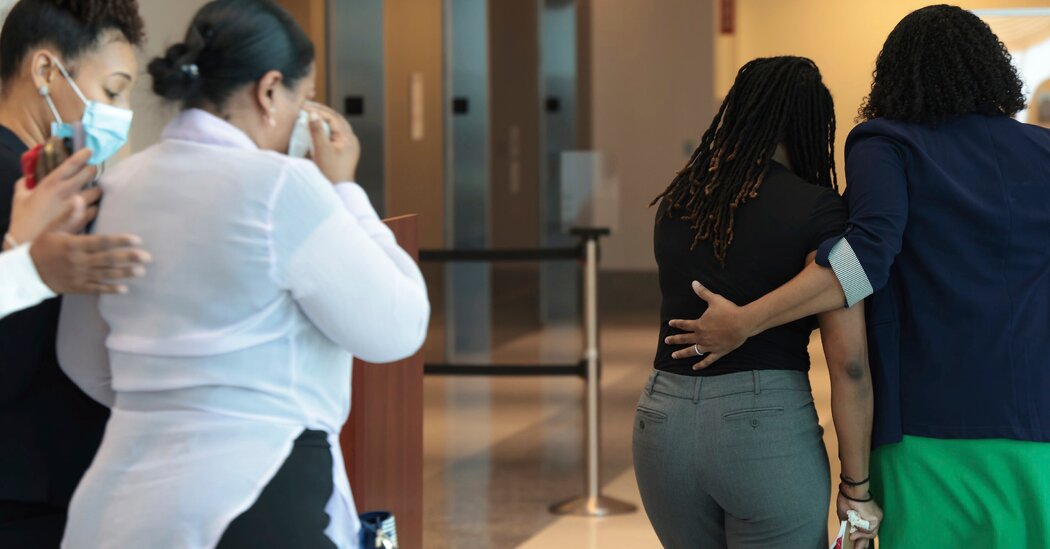 FORT LAUDERDALE, Fla. — To shield heartsick families from the most macabre details of how their loved ones were murdered in a mass school shooting in Parkland, Fla., the court handling the gunman’s sentencing trial has taken an extraordinary step: Graphic videos and photographs are shown only to the jury, so that victims’ relatives and others in the courtroom gallery do not have to endure them.

But the horrifying particulars, conveyed in emotional witness testimony, chilling audio recordings and dispassionate forensic accounts, are impossible to avoid altogether: How a teacher at Marjory Stoneman Douglas High School tied a baby blanket around a wounded student’s arm as a tourniquet. How the gunfire from a semiautomatic rifle boomed inside a classroom under attack. How the high-powered bullets ravaged children’s bodies.

Prosecutors argue that the grisly specifics, while painful, are necessary to prove to the jury that the gunman, Nikolas Cruz, who has pleaded guilty to 17 murders and 17 attempted murders, deserves the death penalty instead of life in prison without the possibility of parole. The judge has allowed the evidence over the objections of defense lawyers, who say that it is repetitive, gruesome and intended to prejudice the jury against their client.

are extremely rare, because they have almost always died during the attack. The public is hardly ever forced to confront grim evidence from autopsy reports, surveillance video and survivors’ testimony in proceedings held years after the deadly rampage.

Many of the Parkland victims’ families have endorsed the prosecutors’ pursuit of the death penalty, even knowing that the trial would be excruciating. They have sat in a downtown Fort Lauderdale courtroom nearly every day since the state began presenting its case last week, shaking their heads, dabbing their eyes and holding on to one another during the most difficult moments.

Their view, however, is not unanimously held. A small number of people connected to the tragedy have publicly opposed capital punishment, in part because the very process of securing a death penalty verdict and waiting out the inevitable years of appeals would be so difficult.

wrote in 2019 in The South Florida Sun Sentinel. While he believed that Mr. Cruz deserved death, Mr. Schulman wrote, pursuing that sentence would involve reliving the Feb. 14, 2018, shooting over and over again.

preached forgiveness — is so unusual among the Parkland victims’ families who have spoken about the trial that his parents have publicly disagreed with him. They think Mr. Cruz, 23, should be sentenced to death.

“That day, the shooter should’ve been stopped,” Mr. Schentrup’s mother, April Schentrup, said. “We shouldn’t even have to endure this trial. If the police did what they were supposed to do, we wouldn’t be here.”

aggravating factors required under Florida law to justify the death penalty, according to Gail Levine, a former Miami-Dade County prosecutor who tried 15 capital homicides. The aggravating factors include that the murders were heinous, atrocious or cruel, and that they were committed in a cold, calculated and premeditated way.

“They have to prove that there are 17 murders and 17 attempted murders,” Ms. Levine said. “The suffering that these people endured has to be explained to the jury.”

The defense can counter — as it has in the Parkland case — that too much graphic evidence may taint the jury’s verdict, though judges often give prosecutors significant latitude.

“The defense has the right to not have a jury that is overwhelmed,” said Robert M. Jarvis, a law professor at Nova Southeastern University in Davie, Fla.

Several witnesses have cried on the stand. Others have testified for only a few minutes, with Mr. Satz asking minimal questions.

Anthony Borges, who was 15 at the time of the massacre, testified about being shot five times while he was in the hallway. He unzipped his jacket during his testimony to show jurors scars from the bullet wounds and from 14 subsequent operations.

Some of the testimony has been chilling without being graphic: That two victims who were in the hallway tried to get to safety by knocking on their locked classroom door, but were killed before they could get in. That Mr. Cruz fled the school and went to a Subway and a McDonald’s before being arrested. That on the day before the massacre, he had searched online: “How long does it take for a cop to show up at a school shooting.”

Jurors have also watched surveillance footage of each victim being shot, and cellphone videos that students recorded during the shooting. They have reviewed disturbing photographs of children dead in classrooms. And they have seen autopsy photographs of almost all of the victims, most of whom were shot more than once. One boy was hit with 12 gunshots, including four to the head.

“They blow up like a snowstorm,” he said of the bullets, which left large exit wounds. Reporters have viewed the graphic evidence at the end of each day’s hearing in court.

One girl suffered five wounds, including a fatal one to the head. Another girl, shot four times, was missing much of her arm. Dr. Boiko described how a fatal graze wound suffered by a third girl fractured her skull and caused brain damage. The same girl, who was shot nine times, suffered another fatal wound that severed her spinal cord. A third wound blew off part of her shoulder blade.

At least one family walked out of the courtroom during Dr. Boiko’s testimony. Testimony from other medical examiners made some victims’ relatives cry. At one point, a female juror also wiped away tears.

Some families, including the Schentrups, have chosen not to watch the trial at all. Ms. Schentrup said she has read occasional news articles or heard from families in attendance.

“We don’t have control over what’s going on in the courtroom with the jury,” she said. “They’ll make the decision that they make. I feel like I understand what happened that day, and I don’t need to relive it.”

Mr. Schentrup said he would find the trial traumatizing. He and his parents prefer to remember Carmen, who was hitting her stride as a young woman and wanted to find a cure for amyotrophic lateral sclerosis.

“Healing, for me, is not something that will happen based upon a verdict at the end of the trial,” he said.

Asbestos in the home can be downright scary. This extremely dangerous material has been linked to all kinds of health problems, including … END_OF_DOCUMENT_TOKEN_TO_BE_REPLACED

ATLANTA — Before the three men convicted of murdering Ahmaud Arbery were sentenced on Monday on federal hate crime charges, they asked a judge to … END_OF_DOCUMENT_TOKEN_TO_BE_REPLACED