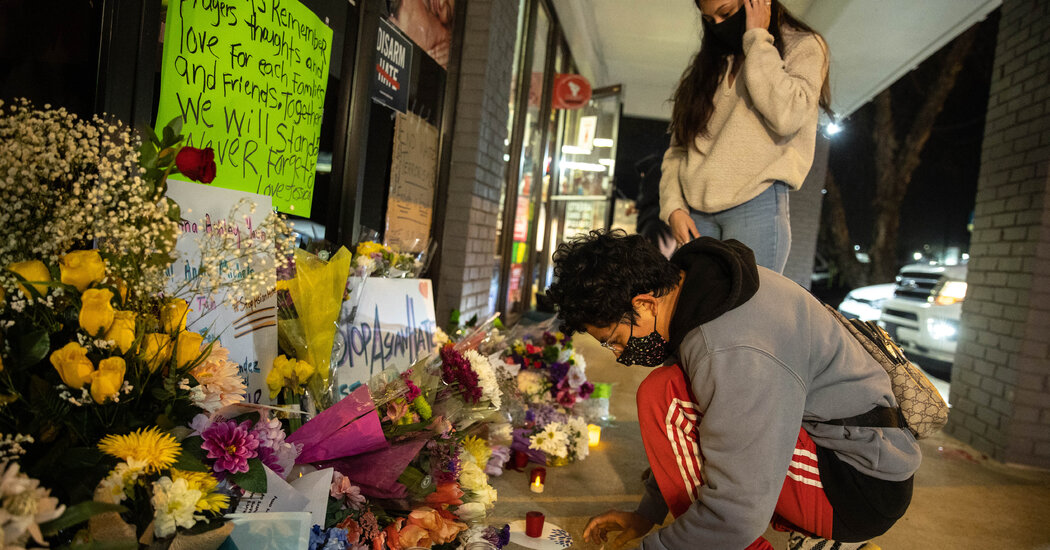 Ms. Yue found work as a cashier at a grocery store outside of Fort Benning and the couple stayed there until getting divorced in 1982. Their families had been close — “She used to take my sister to the spa,” Mr. Peterson said — and they had kept in touch, having lunch together as recently as last summer.

“She was a good mother,” Mr. Peterson said. “She was always there for her kids.”

Ms. Yue was the last person killed in the shootings on Tuesday.

Ms. Grant’s sons, Eric and his brother Randy, 22, first learned about the attacks from a Gold Spa employee’s daughter. They did not know that their mother had died until late that night, after a relative in Korea saw Ms. Grant’s name in a news report.

On Friday morning, the brothers were at home, looking through photo albums for their mother’s upcoming memorial.

This was a new place for them, relatively. They had moved into the house, a rental, from an apartment last year, a moment of celebration because it was a step closer to Ms. Grant’s dream of buying a home.

But Ms. Grant had not spent as much time in it. She was gone for days and weeks on end, Randy Park said. She often stayed at Gold Spa or at a friend’s place near the business, he said, because she did not have a car and the commute to work was lengthy and tedious.

Still, Randy Park said his mother called every night after work to check in on him and his younger brother. The last time she called was Monday evening, he recalled. She asked if they were doing OK and if they had eaten, and then wished them good night.

“I knew she was working for us,” said her youngest son, Eric. “So I never resented her for when she wasn’t around.”

DONETSK REGION, Ukraine — Between the cracks of mortar fire and the metallic bangs of Russian self-detonating mines, Yurii, a Ukrainian Army medic, … END_OF_DOCUMENT_TOKEN_TO_BE_REPLACED

SAN FRANCISCO — Cleve Jones has lived in the Castro neighborhood for nearly 50 years, almost from the day he graduated from high school in Phoenix and … END_OF_DOCUMENT_TOKEN_TO_BE_REPLACED