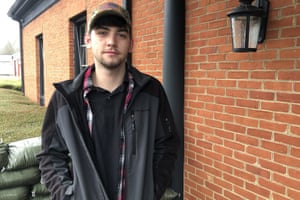 The man suspected of killing eight people at a series of Atlanta-area spas has been charged with an additional four counts of murder.

The Atlanta police department said its homicide unit has charged Robert Aaron Long, 21. Three people were killed at Gold Spa and one person at the Aromatherapy Spa on Tuesday.

Long was earlier charged with four counts of murder and one count of assault in relation to shootings in Cherokee county. Four people were killed, and one injured, at Young’s Asian Massage in the county.

Investigators believe the suspect in the Atlanta spa shootings bought the gun used in the attack this week, CNN reports.

According to the news channel, law enforcement sources said nothing in Robert Aaron Long’s background would have prevented that purchase.

CNN has uncovered a lot of new information regarding Long, who has so far been charged with four counts of murder and one count of assault:

A law enforcement source said the suspect was recently kicked out of the house by his family due to his sexual addiction, which, the source said, included frequently spending hours on end watching pornography online.

According to an incident report from CCSO, a 911 caller said the suspect could possibly be his son and “does have a tracker on his phone.” Another anonymous caller to 911 told dispatch the suspect was “kicked out of his parents’ house last night,” adding that he “was emotional,” the incident report says.

CNN reported that Long is on suicide watch and was “wearing a vest intended to protect him from self-harm” in the police mugshot released earlier.

Joe Biden said violence against Asian Americans is “very, very troubling” but that he is “making no connection at this moment of the motivation of the killer.”

“I am waiting for an answer from – as the investigation proceeds – from the FBI and from the Justice Department. So I’ll have more to say when the investigation is completed,” Biden added, ahead of a virtual bilateral meeting with Irish Prime Minister Micheál Martin.

Just six days ago Biden called out the rise in hate crimes against Asian Americans since the coronavirus pandemic began.

Biden said Asian Americans have been “attacked, harassed, blamed and scapegoated”, and added: “They are forced to live in fear for their lives just walking down streets in America. It’s wrong, it’s un-American and it must stop”

The white gunman accused of killing eight people in Atlanta, six of them women of Asian descent, has been charged with several counts of murder.

Authorities in Cherokee county said Robert Aaron Long, 21, was charged Wednesday with four counts of murder and one count of assault. Four people were killed, and one injured, at Young’s Asian Massage in the county on Tuesday.

The New York Times reported that officials are yet to announce charges relating to the subsequent shootings at two other spas, in the city of Atlanta.

There has been a lot of criticism of how the Georgia shootings have been characterized, after police in Georgia said earlier today the shootings did not appear to be racially motivated. Six of the eight victims were women of Asian descent.

Here’s a sample of the points being made about racism and white supremacy:

Many people have pointed to a statement by Captain Jay Baker, from Cherokee county sheriff’s office, earlier today, where Baker said of Robert Aaron Long: “Yesterday was a really bad day for him and this is what he did.”

Here’s the full quote from Baker:


Investigators, they interviewed him this morning and … they got that impression that yes he understood the gravity of it. He was pretty much fed up, and kind of at [the] end of his rope, and yesterday was a really bad day for him and this is what he did.

There is a lot more news and reaction developing in the Atlanta shooting tragedy that unfolded yesterday evening. Guardian US will have it all for you, with live updates, so stay tuned.

Here are the main points so far about the event in which a male suspect, Robert Aaron Long, 21, of Woodstock, Georgia, is accused of shooting dead eight people, including six women of Asian descent, at three massage parlors in the Atlanta area last night.

Here are some more details about what happened last night involving the suspect in the Atlanta shootings, also an observation from a friend.

The Associated Press writes from Crisp county in Georgia:


Crisp county sheriff Billy Hancock said in a video posted on Facebook that his deputies and state troopers were notified Tuesday night that a murder suspect out of north Georgia was headed their way. Deputies and troopers set up along the interstate and “made contact with the suspect”, he said.

A state trooper performed a PIT, or pursuit intervention technique, maneuver, “which caused the vehicle to spin out of control”, Hancock said. Long, of Woodstock, was then taken into custody “without incident”.

Crisp county sheriff’s spokeswoman, Haley Wade, said this morning that Long is no longer in their custody and that her office has turned over its information to the other Georgia agencies and the FBI.

Rita Barron, the store manager of a business neighboring the massage parlor that was targeted in Cherokee county, said that security footage of the parking lot outside the stores showed the gunman had been sitting outside in his car for about an hour just watching.

Nico Straughan, 21, who went to school with Long, described him as “super nice, super Christian, very quiet” and said that in high school Long brought a Bible to school every day and would walk around with it in his hands.

“He went from one of the nicest kids I ever knew in high school to being on the news yesterday,” Straughan said.

The suspect in the Atlanta shootings, Robert Aaron Long, 21, was tracked down by the authorities with his parents’ help, according to the latest report.

Cherokee county deputies were using a surveillance camera image of Long to hunt him last night.


Long’s parents contacted the Cherokee sheriff’s office to identify their son. They also informed deputies that a tracking device could lead authorities to his vehicle, a Hyundai Tucson. Cherokee sheriff’s spokesman Jay Baker said he didn’t know why Long was being tracked, or if he was aware of it.

They do know that, without the GPS tracker, and his parents’ cooperation, Long, accused of fatally shooting eight people Tuesday at three metro Atlanta massage parlors, would not have been apprehended so quickly, Baker said.

In a statement provided to the Guardian, the Cherokee county police department shared the names of four people who died in the shooting. They also provided the name of one person who was injured: Elcias Hernandez-Ortiz, 30, of Acworth, Georgia.

Of the eight people killed, these are the four victims who have been named:

Reuters has named Alessandra Galloni, one of the news agency’s highest-ranking editors, as its new editor in chief, the company announced Monday.Ms. … END_OF_DOCUMENT_TOKEN_TO_BE_REPLACED