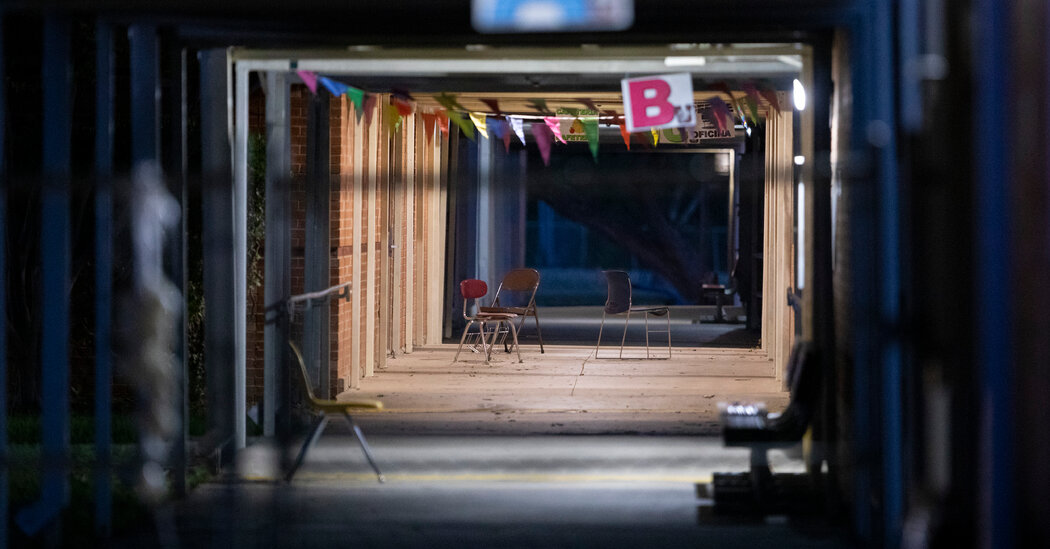 AUSTIN, Texas — Heavily armed officers delayed confronting a gunman in Uvalde, Texas, for more than an hour even though supervisors at the scene had been told that some trapped with him in two elementary school classrooms needed medical treatment, a new review of video footage and other investigative material shows. Instead, the documents show, they waited for protective equipment to lower the risk to law enforcement officers.

The school district police chief, who was leading the response to the May 24 shooting, appeared to be agonizing over the length of time it was taking to secure the shields that would help protect officers when they entered and to find a key for the classroom doors, according to law enforcement documents and video gathered as part of the investigation reviewed by The New York Times.

The chief, Pete Arredondo, and others at the scene became aware that not everyone inside the classrooms was already dead, the documents showed, including a report from a school district police officer whose wife, a teacher, had spoken to him by phone from one of the classrooms to say she had been shot.

who said that some had been shot but were still alive.

Among the revelations in the documents: The gunman, Salvador Ramos, had a “hellfire” trigger device meant to allow a semiautomatic AR-15-style rifle to be fired more like an automatic weapon; some of the officers who first arrived at the school had long guns, more firepower than previously known; and Chief Arredondo learned the gunman’s identity while inside the school and attempted in vain to communicate with him by name through the closed classroom doors.

But with two officers who initially approached the door shot at and grazed, Chief Arredondo appeared to have decided that quickly breaching the classrooms without shields and other protection would have led to officers possibly being killed. He focused instead on getting other children out of the school while waiting for additional protection equipment.

The response by the police at Robb Elementary School is now the subject of overlapping investigations by the Texas state police and the U.S. Justice Department. It was the subject of a closed-door hearing at the State Capitol in Austin on Thursday that featured the director of the state police, Steven McCraw.

apparently not fully aware that he had given the go-ahead after holding officers back for more than an hour, according to a person briefed on the team’s response by a federal agent involved in the tactical effort. Amid the confusion and frustration in the hallway, the agent believed that the team was taking the initiative on its own to go into the classrooms.

in a public meeting this week.

At a news conference on Thursday, the Uvalde Consolidated Independent School District superintendent, Hal Harrell, said the district was in the “process of developing a list of actions we can take to strengthen security in all of our campuses.”

“I want to honor our families at this time with support, love and the commitment to move forward as a district for our students,” he said.

called her husband after being shot, Eva Mireles. Nine children were wounded but survived and one was listed as uninjured, according to the documents.

Ms. Mireles’s husband, Ruben Ruiz, who worked for Chief Arredondo as one of six uniformed members of the Uvalde school district’s Police Department, had rushed to the school, and it is now clear from the documents that he informed the responders on scene that his wife was still alive in one of the classrooms.

“She says she is shot,” Officer Ruiz could be heard telling other officers as he arrived inside the school at 11:48 a.m., according to the body camera transcript.

That message appeared to have reached a sergeant from the Uvalde Police Department, who was near Chief Arredondo inside of the school.

“There’s a teacher shot in there,” an officer could be heard telling the sergeant, according to the transcript, just before 12:30 p.m.

“I know,” the sergeant replied.

By that time, heavily armed tactical officers had arrived, along with protective shields. Chief Arredondo at that point signaled his support for going into the room, but began asking repeatedly for keys that would work on the door.

It was not clear from the transcript if anyone had tried the door to see if it was locked.

Around that time, an officer also informed Chief Arredondo of the gunman’s name.

“Mr. Ramos? Can you hear us, Mr. Ramos? Please respond,” the chief said, according to the transcript. Chief Arredondo tried in English and Spanish. Mr. Ramos gave no answer.

During that time, a large contingent of Border Patrol agents with long guns and shields massed near the door.

According to the transcript of body camera video, Chief Arredondo could be heard speaking into a phone, preparing for a breach and asking for someone to look into the windows of one of the classrooms to see if anything could be seen.

Minutes later, the team went in.

Mr. Ramos was in a corner near a closet in Room 111, facing the doorway, body camera footage showed. He exchanged fire with the officers as they entered. A bullet grazed a Border Patrol agent who was near the door. One of the bullets appeared to have struck the gunman in the head, killing him.

Across the room, the bodies of children lay in an unmoving mass, according to the documents. A similar cluster of bodies lay in Room 112.

Officers could be seen in video footage rushing a few children out of the room and carrying out Ms. Mireles, who appeared to be in extreme pain. She reached an ambulance, but died before reaching a hospital.

Inside the school, officers scrambled to carry or drag the limp bodies of children, some with severe gunshot wounds to their heads, to a triage area in the hallway.

For a time, the fourth graders’ bodies lay where they had been taken, contorted on blood-streaked linoleum under a large colorful banner. “Class of 2022,” it read. “Congrats!”

DALLAS — The rollback of abortion rights has been received by many American women with a sense of shock and fear, and warnings about an ominous … END_OF_DOCUMENT_TOKEN_TO_BE_REPLACED

The poshest place in California's Coachella Valley is The Madison Club. This exclusive gated community in La Quinta is where A-listers and tycoons … END_OF_DOCUMENT_TOKEN_TO_BE_REPLACED