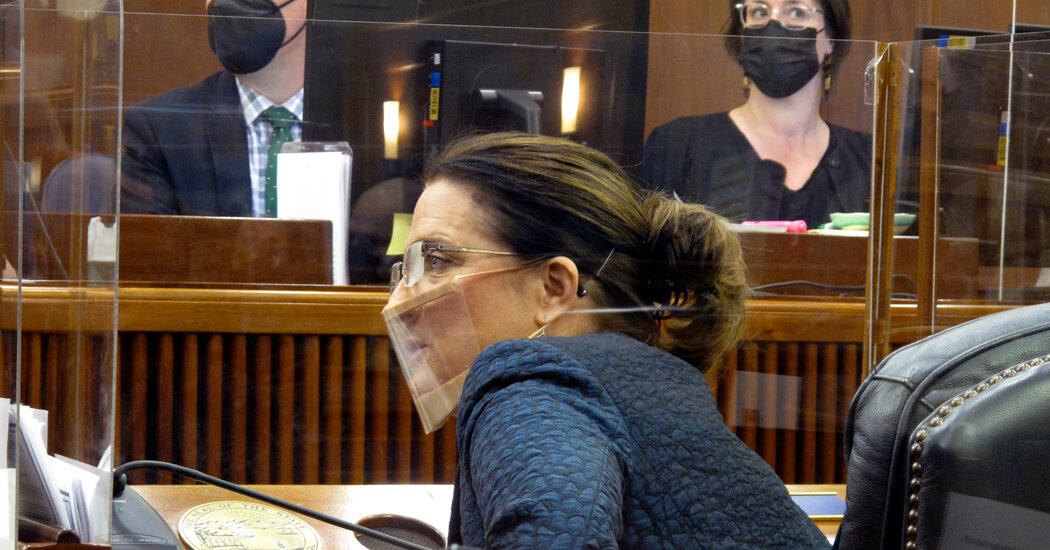 An Alaska lawmaker has asked to be excused from legislative sessions until next year, saying she has no way to fly to the state capital after she was barred from Alaska Airlines for violating mask policies.

The lawmaker, Lora Reinbold, a Republican state senator, was captured on video in April arguing with employees at Juneau International Airport about mask rules.

After the confrontation, Alaska Airlines said it had notified Ms. Reinbold that she was “not permitted to fly with us for her continued refusal to comply with employee instruction regarding the current mask policy.”

Ms. Reinbold had previously complained about Alaska Airlines on Facebook, saying it was “part of mask tyranny.”

scolded by Alaska’s governor, Mike Dunleavy, a Republican, who accused her of spreading misinformation about the state’s response to the coronavirus pandemic and of having “abdicated the tenets of your oath as a public servant.”

Speaking on the floor of the Alaska State Senate on Thursday, Ms. Reinbold asked that she be excused from Senate business from Sept. 11 through Jan. 15 “because there’s no airline other than Alaska Airlines that flies into Juneau during that period that I’m aware of.”

“The political ban is still in place as long as Biden’s illegitimate mask mandate is in place on private and public transportation,” she told her colleagues.

The Republican-led Senate accepted her request without objection and indicated that she would be shown as “excused on those dates.”

Ms. Reinbold represents Eagle River, Alaska. If she cannot fly, a trip from her district to Juneau, the state capital, could require her to travel more than 19 hours by car and ferry, and to cross over the Canadian border.

If the only major airline offering flights to Juneau “can unconstitutionally impede a legislators ability to get to the Capital in a safe and timely fashion,” she added, “it could undermine our representative republic.”

Last month, the Transportation Security Administration announced that it was extending the requirement that travelers in the United States wear masks at airports, on airplanes, and on commuter buses and trains through Jan. 18.

Mask mandates have become a major flash point on airplanes, contributing to a surge in unruly and sometimes violent behavior from passengers who refuse to comply.

double fines for travelers who refused to wear masks in airports and on commercial airplanes. The minimum penalty for first-time offenders was raised to $500. Second-time mask refusers may be fined as much as $3,000.

“If you break the rules, be prepared to pay — and by the way, show some respect,” Mr. Biden said.

In the video that was posted on Twitter in April, Ms. Reinbold is seen at the airport in Juneau, wearing a mask but arguing with employees about it.

“We need you to pull the mask up, or I’m not going to let you on the flight,” an employee tells Ms. Reinbold.

“It is up,” Ms. Reinbold responds.

It was not clear if Ms. Reinbold had been permitted on the flight. One of the videos shows her leaving the boarding area.

In March, Ms. Reinbold said on Facebook that she had been asked to leave a committee hearing because she was not wearing an approved face shield. After that, Ms. Reinbold was barred from the State Capitol until she complied with health and safety protocols. She later returned to the Capitol in a clear face mask.

She did not immediately respond to requests for comment on Saturday.

GREENVILLE, N.C.--(BUSINESS WIRE)--Employers aiming to win the war on talent have a new “A” team to tap into: college and professional athletes. … END_OF_DOCUMENT_TOKEN_TO_BE_REPLACED

Mortgage rates are likely to rise in July, extending a seven-month streak. High inflation, and the Federal Reserve's efforts to control it, have … END_OF_DOCUMENT_TOKEN_TO_BE_REPLACED