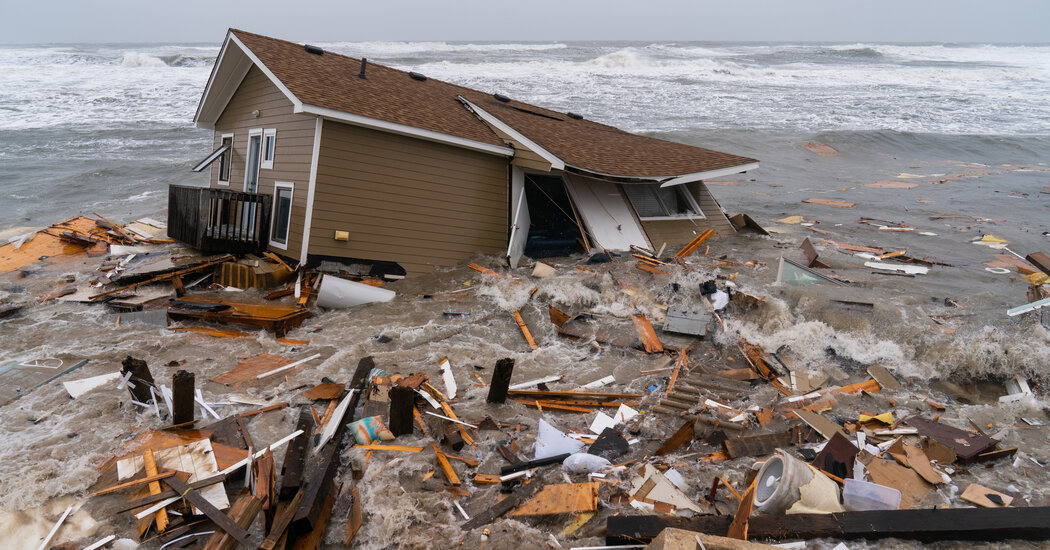 RODANTHE, N.C. — Like millions of other people this week, Hien Pham marveled at the online video of the two-story, pea-green beach house as it collapsed into a rising sea, left to bob in the agitated surf like a giant cork.

“It’s definitely a feeling that you can’t explain,” said Mr. Pham, 30, a Knoxville, Tenn., real estate agent, in a phone interview. “Just to see something that once was there, and it’s not there anymore.”

The feeling, he added, “is pretty empty.”

Three prime beachfront lots are now empty on Ocean Drive, a small stretch of a charmingly scruffy Outer Banks subdivision called Trade Winds Beaches that has, to the chagrin of its property owners, become a sort of poster neighborhood for sea-level rise — particularly since the video of Mr. Pham’s house, which collapsed Tuesday, was shared widely on social media. The once-generous stretch of beach in front of the houses has largely vanished in recent months, leaving them vulnerable to the destructive power of the Atlantic Ocean.

Robert Coleman, the owner of the house that fell in February, had considered moving or tearing down the place. He discovered that insurance companies would pay him for the house if it was destroyed by the ocean, but not if he tore it down himself. Mr. Coleman said he got in touch with a company that would move his house 35 feet inland, at a cost of $185,000. It was too much for him to stomach. So the tide took it away.

“I got a call from the park service saying, ‘Your house just fell. Come get it cleaned up,’” Mr. Coleman said. The debris washed down the coast for miles. The total cleanup, he said, cost him $57,000.

Mr. Patricelli said that two of his neighbors have moved their houses inland. But he said that only seemed to be buying a little time. “Moving the house doesn’t mean you’re not going to have problems,” he said. “We can see what the ocean can do.”

Elsewhere on Hatteras Island, some communities have embraced a solution called beach nourishment, which involves replenishing the beach with sand pumped from offshore. But that is expensive work, and Danny Couch, a member of the Dare County Commission, said he was skeptical that he could convince the park service that such a project was necessary to protect vital infrastructure, in part because a new elevated road will soon open up next to a flood-prone stretch of Highway 12 near Ocean Drive.

For now, Mr. Patricelli’s dream of having a rental investment property — one where his bicoastal family could also gather and make memories — is lost. But some beachfront houses are still attracting visitors. Just up the beach from Mr. Patricelli’s lot, Stephanie Weyer, a truck dispatcher from Pennsylvania, was enjoying a vacation with her family as best as she could, given the weather and the drama. She said she planned to come back to the same house next year — but 20 years on, she wondered if the neighborhood would be gone.

A few houses away, Matt Storey was pacing on the outdoor deck of the beachfront home he had bought in November and christened “Mermaid’s Dream.” He estimated there were roughly 70 feet of sand between the house and the beach when he closed on the property. On Thursday, the waves were lapping by the pilings of the house.

Mr. Storey, who lives in Raleigh, N.C., said that he felt somewhat confident buying the house, particularly because it had been moved back from the ocean in 2018 at a cost of $200,000. He owns another place nearby, and while he expected potential erosion problems eventually, he did not anticipate them coming so fast.

For now, he said, he planned to keep renting the place. But he said he worried about losing his investment.

Mr. Storey said his “nuclear option” was moving to Ocean Drive and living in his house full time, but that, too, came with obvious risks. “I don’t have a plan,” he said. “My plan is to ride it out.”

The poshest place in California's Coachella Valley is The Madison Club. This exclusive gated community in La Quinta is where A-listers and tycoons … END_OF_DOCUMENT_TOKEN_TO_BE_REPLACED

KOROPY, Ukraine — Four men tugged at long strips of fabric to lift a coffin out of the gaping hole in the backyard of a small house. They flung the … END_OF_DOCUMENT_TOKEN_TO_BE_REPLACED