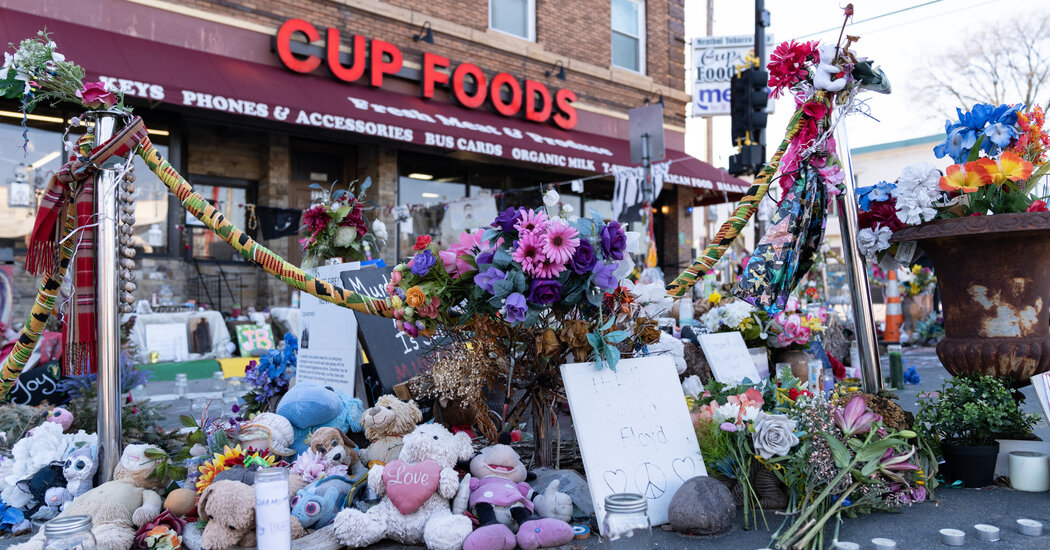 MINNEAPOLIS — For nearly a year, the country’s understanding of George Floyd’s death has come mostly from a gruesome video of a white Minneapolis police officer kneeling on Mr. Floyd’s neck for more than nine minutes. It has become, for many, a painful encapsulation of racism in policing.

But as the murder trial of the officer, Derek Chauvin, opened on Monday, his lawyer attempted to convince jurors that there was more to know about Mr. Floyd’s death than the stark video.

convicted of second-degree murder, the most serious charge that Mr. Chauvin is now facing.

for nine minutes and 29 seconds, Mr. Floyd had cried out that he could not breathe, at one point calling for his mother.

“They’re not screaming for their lives,” Mr. Blackwell said of someone experiencing an overdose. “They’re not calling on their mothers. They are not begging: ‘Please, please. I can’t breathe.’”

He continued: “The most important numbers you will hear in this trial are nine, two, nine. What happened in those nine minutes and 29 seconds when Mr. Derek Chauvin was applying this excess force to the body of Mr. George Floyd.”

Cup Foods, a convenience store, which led a clerk to call the police. Mr. Floyd had taken pills that contained methamphetamine and fentanyl, Mr. Nelson said. He fell asleep in his car. He then struggled with police officers, Mr. Nelson said.

Once the officers got Mr. Floyd to the ground, Mr. Nelson asserted, he was still resisting. Mr. Floyd was eventually subdued, Mr. Nelson said, but he seemed to dispute one of the central elements that has appeared to be shown in the video — that Mr. Chauvin was kneeling on Mr. Floyd’s neck.

were fired by the Police Department shortly after Mr. Floyd’s death, and the other three face charges of aiding and abetting second-degree murder.

The chaotic surroundings caused “the officers to divert their attention from the care of Mr. Floyd to the threat that was growing in front of them,” Mr. Nelson continued, suggesting that those dynamics played a factor in how his client treated Mr. Floyd.

As the trial began in Hennepin County District Court on Monday, a nervous energy pervaded downtown Minneapolis, where several government buildings, including the courthouse, were encased with concrete slabs and metal fencing. A helicopter whirred overhead for much of the sunny, windswept day.

Reporters gathered on a lawn just south of the courthouse, where members of Mr. Floyd’s family and their lawyers held a news conference before the trial started.

“They say trust the system,” said Terrence Floyd, one of Mr. Floyd’s brothers. “Well, this is your chance to show us we can trust you.”

Many supporters of the Floyd family said they had seen earlier cases in which video evidence was not enough to secure a conviction against the police. Law enforcement officers have recently killed about 1,000 people a year, experts say, but fewer than 200 officers have been charged over the past 15 years; fewer than 50 have been convicted.

“Let us be clear that it is not just Chauvin on trial,” said the Rev. Al Sharpton, who has been working with the Floyd family. “The United States’ ability to deal with police accountability is on trial.”

Whether you optimistically hope that mortgage rates will decline or are resigned that rates will stay elevated above the historic lows of 2021, you … END_OF_DOCUMENT_TOKEN_TO_BE_REPLACED