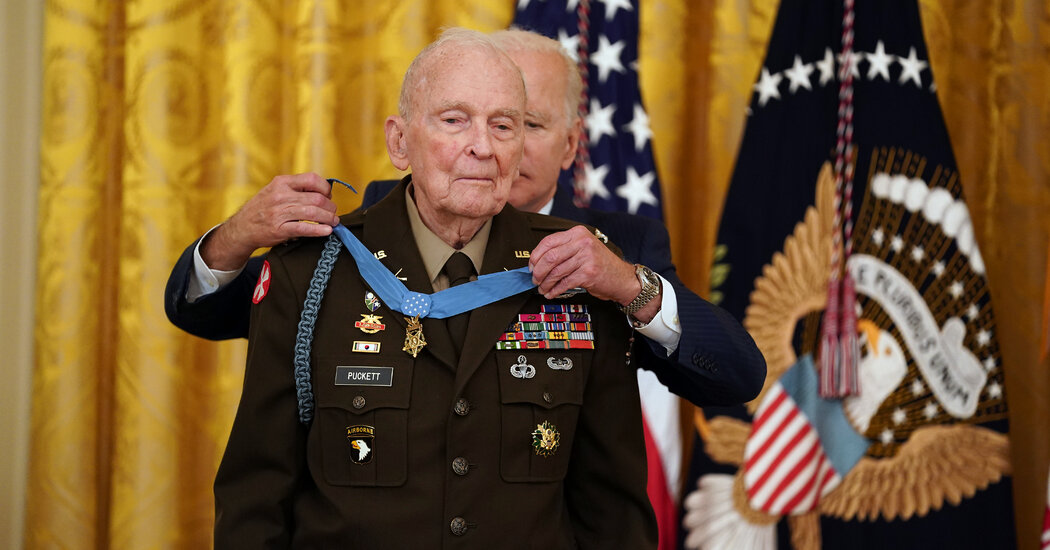 President Biden awarded a Korean War hero, Ralph Puckett Jr., the Medal of Honor on Friday, seven decades after he led 51 Rangers in fighting off successive waves of enemy counterattacks after he was gravely wounded by a hand grenade.

Colonel Puckett, 94, initially received a Distinguished Service Cross for his command of the Eighth U.S. Army Ranger Company in November 1950. But that citation was upgraded after a campaign by a retired Army officer who believed the actions by the young lieutenant from Georgia warranted the nation’s highest military honor.

“I wish our son Beau were able to see this,” Mr. Biden said as he placed the ribbon around Colonel Puckett’s neck, invoking the memory of his late son, Beau Biden, who served in the Army Judge Advocate General’s Corps.

Mr. Biden honored Colonel Puckett, who has also been decorated for his valor in Vietnam, during a visit to the White House by President Moon Jae-in of South Korea. It was the first time Mr. Biden has issued the medal as president — and the first time a foreign leader was present for such a ceremony, according to White House officials.

“Puckett risked his life by running across the area to draw fire that would reveal the location of the nest,” Mr. Biden recounted. “It took three runs intentionally exposing himself to the enemy to pick off the gunner.”

When the Chinese finally overran the position, Lieutenant Puckett — who had been hit by mortar fire twice after his foot was nearly blown off — ordered his company to evacuate and said he wanted to be left behind.

Two Rangers ignored him, and carried him behind the lines to safety.

He would recover, and go on to serve in Vietnam, before retiring as a colonel in 1971 as one of the most decorated combat veterans in the country’s history.

Colonel Puckett would go on to serve as an executive with Outward Bound, a nonprofit educational organization that exposes students, especially those from cities, to wilderness settings.

AUSTIN, Texas--(BUSINESS WIRE)--As the first multifamily management company to be recognized in the Public Relations and Marketing Excellence Awards, … END_OF_DOCUMENT_TOKEN_TO_BE_REPLACED

There have been whispers of cooling housing and rental prices in the San Francisco Bay Area, but that hasn't yet translated into practical, noticeable … END_OF_DOCUMENT_TOKEN_TO_BE_REPLACED

Cars pass in Independence Square at twilight in Kyiv, Ukraine, Monday, Oct. 31, 2022. Rolling ... [+] blackouts are increasing across Ukraine as the … END_OF_DOCUMENT_TOKEN_TO_BE_REPLACED