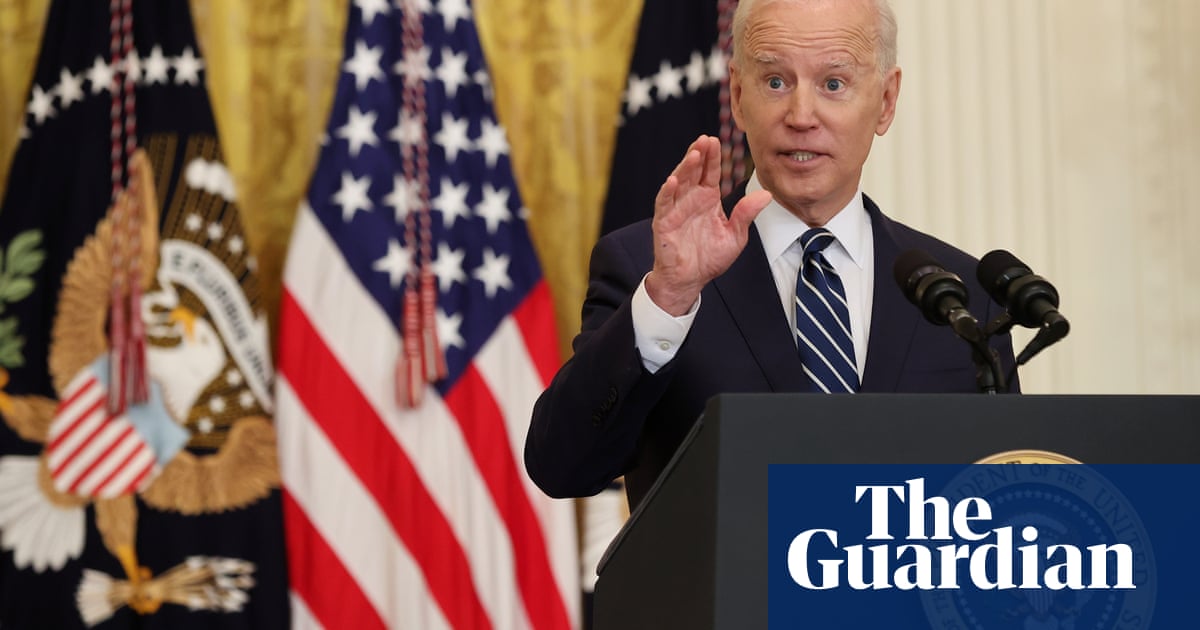 In his first press conference as president, Joe Biden announced he had doubled his administration’s vaccination goal to 200m shots during his first 100 days as president.

“I know it’s ambitious, twice our original goal, but no other country in the world has even come close to what we are doing,” Biden said of his new goal.

Biden’s decision to make the announcement at the beginning of his press conference represented a clear attempt to at least insulate one piece of news his administration hoped would not fall through the cracks at a briefing where a host of contentious issues were expected – particularly on immigration and the filibuster.

On immigration, Biden stressed that the situation at the southern border was not a crisis. The president recently appointed vice-president Kamala Harris as the point-person to try to tackle problems there.

An ABC News reporter, however, noted that one border facility was currently holding unaccompanied migrant children at 1,556% capacity. She asked Biden if he considered that to be acceptable.

“That’s a serious question, right? Is it acceptable to me? Come on,” Biden said. “That’s why we’re going to be moving 1,000 of those kids out quickly.”

The president expressed sympathy with parents who felt their best option was to send children on the treacherous journey to the US. And when a Univision reporter noted that Customs and Border Protection has not been notifying migrant children’s family members about their arrival to the US in a timely manner, Biden said it would take time to improve communications and processes in the immigration system.

But he also reiterated that his administration would not relax laws to increase the number of people coming in across the border, other than minors.

“They should all be going back. All be going back,” Biden said. “The only people we are not going to leave sitting there on the other side of the Rio Grande with no help are children.”

Biden was also asked multiple times about his position on the filibuster. He agreed with the critique of Democratic senators that it is a relic of the Jim Crow era of American history designed to defend slavery.

But rather than offering full-throated endorsement of ending the filibuster, he instead argued that there should only be a “talking filibuster”, where a senator could block legislation as long as they kept talking on the floor of the chamber.

“I strongly support moving in that direction,” Biden said.

Biden has increasingly had to take a go-it-alone approach to executing his agenda, despite efforts to win over Republican support. That has helped fuel pressure among rank-and-file lawmakers to try and gut the filibuster or create workarounds for Democratic legislation that faces staunch opposition from Republicans.

When Biden became president, he had hoped his longstanding relationship with Senator Mitch McConnell of Kentucky, the top Republican in that chamber, would help create bipartisan support. But Biden shrugged off that opposition, nottng that he and McConnell know each other well.

The president also noted that despite the gains the country has experienced on the vaccine effort, the impact of the pandemic is still being felt. He reiterated a theme he and his closest aides have been trying to drill into Americans’ heads since Biden signed into law his American Rescue Plan Act of 2021.

“There are still too many Americans out of work, too many families hurting,” Biden said. “But I can say to you, the American people, help is here and hope is on the way.”

Biden also said he was likely to run for re-election in 2024, which he had not previously addressed. Asked if Harris would be his running mate, the president said: “I fully expect that to be the case. She’s doing a great job.”

On the war in Afghanistan Biden did not offer a precise timetable for withdrawal but did say that he did not troops to be there by the end of next year.

“I can’t picture that being the case,” Biden said.

Mostly absent from the conference were questions about the coronavirus pandemic and the topic of gun control, after two mass shootings in the past two weeks. Biden promised to expand on his gun control actions in the coming weeks.

An affordable center-chimney Colonial in Glastonbury, CT, is the oldest property to hit the market this week on Realtor.com®.Offered at a steep … END_OF_DOCUMENT_TOKEN_TO_BE_REPLACED

Nissan was one of the early pioneers of the electric car. The Leaf has now sold over 600,000 units worldwide since its launch in 2011 and is still … END_OF_DOCUMENT_TOKEN_TO_BE_REPLACED

RUDNE, Ukraine — Yurii Brukhal, an electrician by trade, didn’t have a very dangerous role when he volunteered for Ukraine’s territorial defense … END_OF_DOCUMENT_TOKEN_TO_BE_REPLACED