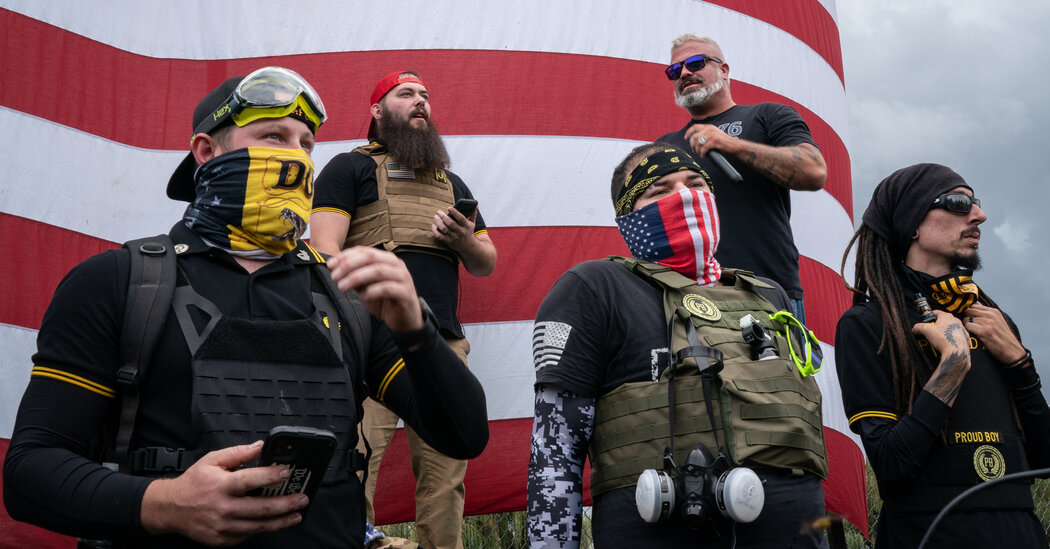 The attempts to more assertively grapple with the potential for violence from white supremacists and militias are a shift from President Donald J. Trump’s pressure on federal agencies to divert resources to target the antifa movement and leftist groups despite the conclusion by law enforcement authorities that far-right and militia violence was a more serious threat.

President Biden’s approach also continues a slow acknowledgment that especially after the Capitol riot on Jan. 6, the federal government needs to put more attention and money into tracking and heading off threats from inside the United States, after two decades in which it made foreign terrorism the security priority.

In an intelligence report delivered to Congress last month, the administration labeled white supremacists and militia groups as top national security threats. The White House is also discussing with members of Congress the possibility of new domestic terrorism legislation and executive orders to update the criteria of terrorism watch lists to potentially include more homegrown extremists.

F.B.I. agents have worked domestic extremism cases for years. But the renewed focus from the highest levels of government is a major shift, especially as the administration grapples with whether current tactics and resources are enough to prevent future attacks.

The decision to confront the issue more directly stands in contrast to the approaches of the Trump and Obama administrations. In 2009, the Obama administration rescinded an intelligence assessment after it mentioned that veterans could be vulnerable to recruitment by domestic extremist groups, prompting political backlash.

filed a whistle-blower complaint accusing the department’s leadership of ordering the modification of intelligence assessments to make the threat of white supremacy “appear less severe” and include information on left-wing groups to align with Mr. Trump’s messaging. The Homeland Security leadership under the Trump administration denied the accusations.

The Obama administration also treaded carefully on the issue out of political concerns. Before announcing his presidential candidacy in 2019, Mr. Biden asked Janet Napolitano, who served as the homeland security secretary at the start of the Obama administration, about the decision in 2009 to rescind a report warning that U.S. military veterans were vulnerable to recruitment by extremist groups.

criminal charges against more than 300 individuals for their role in the Capitol riot. The charges range widely and include assaulting police officers, illegally entering the Capitol building and conspiring to interfere in the election certification process. The leaders of the Oath Keepers militia and the far-right Proud Boys group are among the most prominent targets of the sprawling investigation.

Critics of a domestic terrorism statute say it could expand the government’s surveillance authorities too much and be used against minority communities.

A letter signed by Representatives Rashida Tlaib of Michigan, Alexandria Ocasio-Cortez of New York and eight other Democrats said the intelligence failure surrounding the Capitol breach reflected a reluctance by law enforcement to crack down on white nationalist groups, not a lack of government tools to monitor them.

One homeland security official involved in the department’s review of how to handle domestic terrorism said the agency did not need new laws but should instead employ the tools that have long been used against foreign terrorism.

One strategy is to analyze federal travel data to trace the patterns of possible militia members and extremists, especially as American groups increasingly establish connections to Europe, the official said. Members of the groups can then be added to so-called no-fly lists, he said.

The department’s review is focused not only on clear acts of terrorism but also on those who are pushed to commit attacks because of a combination of mental health issues, grievances and ideologies that provide a perceived justification for violence. Officials are also evaluating how to prevent attacks similar to the one at the Capitol on Friday, where a man crashed his vehicle into two officers at a barricade outside the building before getting out and charging them with a knife.

The suspect, who was shot and killed by the police after the attack, was identified by law enforcement officials as Noah Green, 25, of Covington, Va. Friends and family say he struggled with isolation and mental health issues. The police have not categorized the attack as “terrorism related,” and investigators continue to scour Mr. Green’s social media posts that showed an intensifying interest in the Nation of Islam.

failing to issue a warning before Jan. 6, despite a slew of social media posts that armed groups intended to come to Washington to protest the results of the 2020 election.

The Homeland Security Department this year allocated $77 million for state and local governments to train police officers and improve intelligence-sharing across states.

Separately, the agency doubled the number of grants for organizations developing projects to research prevention strategies, including “off boarding” those vulnerable to radicalization. The allocation of $20 million, which has not been awarded yet, comes after the Trump administration gutted the grants before restoring $10 million in the last year of his term.

But increasing funding and acknowledging the problem are merely first steps. The work of identifying people associated with domestic extremism and helping them disengage from violence remains daunting.

Previous efforts by law enforcement to enlist the help of community members had prompted concern that the federal government was trying to spy on minority communities.

The Biden administration’s new approach to the issue is trickling down to those on the front lines of dealing with domestic extremists.

During the Obama administration, Mohamed Amin Ahmed, who runs an anti-extremism nonprofit in Minneapolis, had considered applying for federal grants to support his efforts to make cartoon videos seeking to debunk the Islamic State’s appeals to children.

But he decided not to apply after learning that the funding was tied to a requirement that he report suspicious activity to law enforcement.

Mr. Ahmed is now creating videos to target followers of QAnon, the pro-Trump conspiracy theory. He said he was planning to apply for the new round of government grants, which are no longer linked to law enforcement.

“We’re trying to help and not be part of the surveillance state,” Mr. Ahmed said.

After the Capitol riot, anti-extremism efforts are caught in a thicket of difficult political and First Amendment issues. Interventions that aim to change political beliefs or seem aligned with Democrats could be ineffective at attracting far-right extremists to participate, experts said.

A program in New York City, which recently won a federal grant of more than $740,000, will focus on stopping people from committing politically motivated violence without trying to change their beliefs.

Richard Aborn, the president of the nonprofit organization overseeing the program, said that it would accept participants through referrals from law enforcement, including for people who have already been charged with crimes.

Individuals who qualify after a psychological evaluation would then participate in one-on-one therapy for several months. The program’s success would be measured by changes in the individual’s emotional state.

Mr. Aborn said he expected the pool of participants to include white supremacists, jihadists and people threatening mass shootings.

To identify individuals who are not on law enforcement’s radar, Mr. Aborn is planning to develop targeted advertisements that would be seen by people who, for instance, were conducting anti-Semitic searches online. Clicking the ads would direct them to the one-on-one intervention program.

“This is all a new space,” Mr. Aborn said. “None of us know with any certitude about how much progress we’re going to make.”

AUSTIN, Texas--(BUSINESS WIRE)--As the first multifamily management company to be recognized in the Public Relations and Marketing Excellence Awards, … END_OF_DOCUMENT_TOKEN_TO_BE_REPLACED

There have been whispers of cooling housing and rental prices in the San Francisco Bay Area, but that hasn't yet translated into practical, noticeable … END_OF_DOCUMENT_TOKEN_TO_BE_REPLACED

Cars pass in Independence Square at twilight in Kyiv, Ukraine, Monday, Oct. 31, 2022. Rolling ... [+] blackouts are increasing across Ukraine as the … END_OF_DOCUMENT_TOKEN_TO_BE_REPLACED