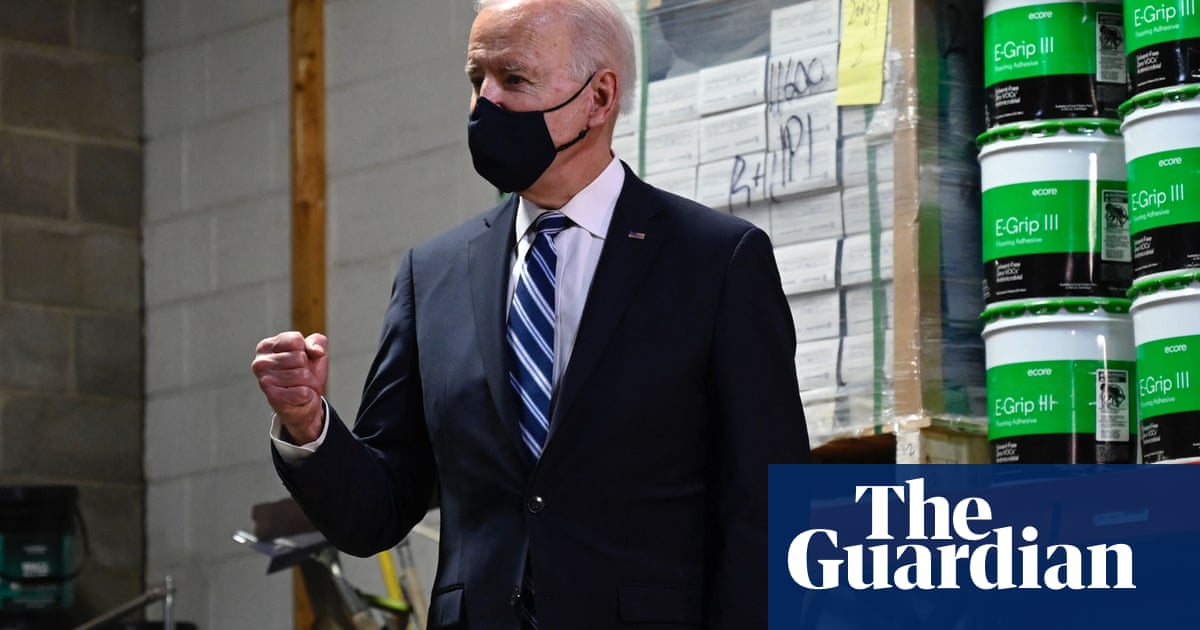 Joe Biden stopped by a unionized, Black-owned flooring company in the battleground state of Pennsylvania on Tuesday to highlight how the provisions of his $1.9tn coronavirus relief package will help lift small businesses hurt by the pandemic, part of cross-country campaign to promote the first major legislative achievement of his presidency.

During his visit to Smith Flooring Inc, located in the Philadelphia suburb of Chester, Biden said the sweeping new law was a “big deal” and promised the owners that “more help is on the way – for real”.

“We’re gonna be paying our employees,” James Smith, who co-owns the business with his wife Kristin Smith, said of their plan for the relief checks. “We’ve been paying them. Since the first run of PPP, we decided we wanted to take that money and not lay anyone off. We put everybody in a group and said, ‘Look, we’re gonna do this for you as a team, we’re gonna get through this together.”

Biden’s visit to Smith Flooring in Pennsylvania, a state that he clawed back from Donald Trump in 2020, was his first stop on the White House’s “Help is Here” tour and comes a day after Biden announced that his administration was on track to mark two key milestones in the coming days: delivering 100m Covid vaccinations since his inauguration – far outpacing his initial promise to administer those doses in his first 100 days – and distributing 100m stimulus checks to Americans.

The tour includes Biden, Kamala Harris and their spouses, Jill Biden and Doug Emhoff. Later this week, Biden and the vice-president will visit Georgia, another swing state that he narrowly won in 2020.

During the visit, Biden explained how his plan would help small businesses like Smith Flooring, which saw its revenue fall by roughly 20% during the pandemic, according to the White House. The flooring company recently qualified for a federal Payment Protection Program (PPP) loan under an action taken by the president targeting businesses with 20 or fewer employees.

Biden’s plan, one of the largest emergency aid packages ever enacted, would provide $1,400 direct payments to most Americans, send $350bn in aid to state, local and tribal governments, dramatically expand the child tax credit and spend tens of billions of dollars to accelerate Covid-19 vaccine distribution and testing.

“Shots in arms and money in pockets,” Biden said in brief remarks on Tuesday. “That’s important. The American Rescue Plan is already doing what it was designed to do: make a difference in people’s everyday lives.

Alawi Mohamed, the owner of a commercial strip in Chester, said he the first loan given in last year’s coronavirus relief package had helped him stay afloat, but was hoping Biden’s plan would give him a much-needed boost.

“Everybody got affected by Covid-19. When they shut down everything we got affected big time. Nobody was around and people were actually staying home,” he said. Now he said, he is, “back to business, gradually, but everything came out good”.

Also on Tuesday, Biden introduced Gene Sperling, a longtime Democratic policy aide, to oversee the implementation of the $1.9tn package.

Democrats are increasingly confident that the stimulus package will boost their prospects in 2022, when they will attempt to keep their slim majorities in both chambers of Congress despite a long history of the president’s party losing seats during the congressional midterms.

Every Democrat except one House member voted for the bill while Republicans unified against it.

Republicans have attacked the plan as bloated, filled with liberal priorities that run far afield of the coronavirus response. But Democrats argue that the package will lift the nation from the dual crisis by rushing immediate aid to those hit hardest by the economic downturn and help ensure a more even recovery. They also say it will go further to tackle deep-seated economic inequalities, halving child poverty and expanding financial aid for families squeezed by job loss and school closures.

Polling has consistently found that Americans favor Biden’s stimulus plan. According to a new CNN/SSRS poll released this week, 61% of Americans approve of the coronavirus relief package, while 37% oppose it.

Haunted by their lashing in the 2010 midterms, Democrats now believe that they didn’t do enough to promote their sweeping stimulus package, shepherded by the new Obama administration and passed by Democratic majorities in response to the financial collapse.

The House speaker, Nancy Pelosi, has touted the package as among the most consequential bills of her decades-long career, putting it on par with the Affordable Care Act. In a letter to colleagues after the bill was signed, she urged members to hold tele-town halls and send informational literature to constituents to explain how the bill could benefit them and their families.

This comes as Biden, his wife and his vice-president fan out across the country to promote the legislation as part of the administration’s “Help is Here” tour.

“We want to avoid a situation where people are unaware of what they’re entitled to,” Harris said during her visit to a culinary academy in Las Vegas on Monday. “It’s not selling it – it literally is letting people know their rights. Think of it more as a public education campaign.”

Phil Shell loves the Bay Area and its real estate market. He’s been building his career here as an agent over the past eight years, but even he hasn’t … END_OF_DOCUMENT_TOKEN_TO_BE_REPLACED

DS4 Cross DS The Plug-in hybrid seems the perfect answer to the electric car dilemma; battery power for all your local needs and a traditional motor … END_OF_DOCUMENT_TOKEN_TO_BE_REPLACED