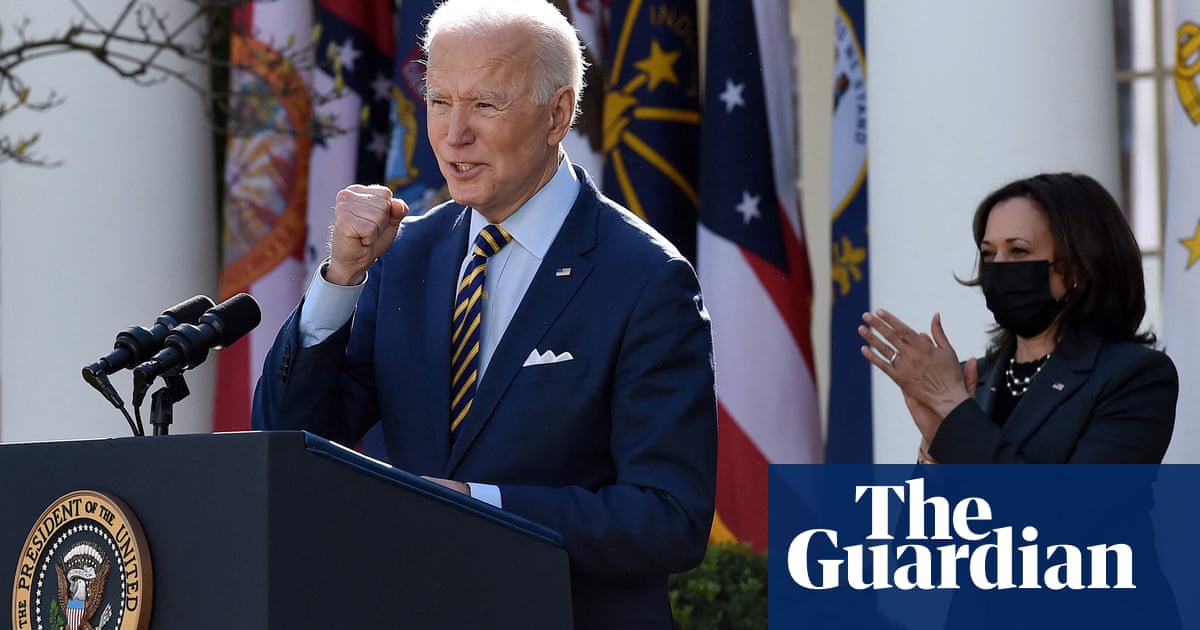 In the White House Rose Garden, where for four years Donald Trump raucously celebrated political wins with his allies, it was now the turn of Democrats to take a victory lap – masked and physically distanced, of course.

Kamala Harris, the vice-president, heaped praise on Joe Biden for signing a $1.9tn coronavirus relief bill, the biggest expansion of the American welfare state in decades. “Your empathy has become a trademark of your presidency and can be found on each and every page of the American Rescue Plan,” Harris said.

Democrats this week passed the plan into law; now they have to sell it. Friday’s event with members of Congress fired the starting gun for Biden, Harris and their spouses to mount an aggressive marketing campaign, travelling the country to tell Americans directly how the hard won legislation will improve their lives.

Salesmanship was always seen as Trump’s forte but this is a golden opportunity for Biden, a once unlikely saviour. The oldest president ever elected – at age 78 – is riding high in opinion polls. His rescue plan is endorsed by three in four citizens. His opposition is in disarray with Republicans struggling to find a coherent counter- narrative, squabbling over Trump and obsessing over culture wars.

But Biden’s long career will have taught him the laws of political gravity: presidents and prime ministers who start on the up inevitably take a fall. He has also spoken of the need to avoid the fate of Barack Obama who, having intervened to stave off financial disaster in 2009, was repaid with a “shellacking” for Democrats in the midterm elections.

Politics is about momentum and, with vaccines coming fast, the economy set to roar back, and spring in the air, Biden has it for now. Ed Rogers, a political consultant and veteran of the Ronald Reagan and George HW Bush administrations, said: “In politics, good gets better, bad gets worse. Biden is on something of a roll right now and so it’s good for him to be a little more aggressive and be seen out and about.

“They do want to take credit and he should. The tides will turn; there’ll be periods when they look like they can’t do anything right.”

In what the White House calls a Help is Here tour, first lady Jill Biden is set to travel to Burlington, New Jersey, on Monday, while the president will visit Delaware county, Pennsylvania, on Tuesday. Harris and her husband, Doug Emhoff, will go to Las Vegas on Monday and Denver on Tuesday. Emhoff will remain out west and make a stop in Albuquerque, New Mexico, on Wednesday.

At the end of the week, Biden and Harris will make their first joint trip in office to Atlanta where Democrats’ victories in two Senate runoff elections in January were pivotal to getting the relief package passed against unyielding Republican opposition.

The White House has acknowledged that the public relations offensive is an attempt to avoid a repeat of 2009, when the Obama administration did not do enough to explain and promote its own economic recovery plan. Biden, who was vice-president at the time, told colleagues last week that Obama was modest and did not want to take a victory lap. “We paid a price for it, ironically, for that humility,” he said.

That price included a backlash in the form of the Tea Party movement and rise of rightwing populism. But there were important differences in substance as well as style. Obama’s $787bn bill, which followed the bailout of the banks, delivered a recovery that felt abstract and glacial. This time the impact is more immediate and tangible: some Americans will receive a $1,400 stimulus payment this weekend, with mass vaccinations and school reopenings on the way.

Bill Galston, a senior fellow at the Brookings Institution thinktank in Washington and former policy adviser to Bill Clinton, said: “I underestimated the extent to which the experience of 2009 has seared itself into the memory of senior Democrats: the interpretation of going too small and paying the price in a painfully slow recovery, spending too long at the beginning negotiating with members of the other party who were never going to agree and never going to compromise, not telling the American people what they had accomplished for them.

“The list of lessons learned is a very long one and, to an extent that I find surprising, the administration is refighting and winning the past war.”

Despite preventing financial meltdown, Democrats lost 63 seats in the House of Representatives in the 2010 midterm elections, the biggest shift since 1948. That fit a pattern in which the incumbent president’s party tends to fare badly in the first midterms, and so Republicans are upbeat about their chances of regaining both the House and Senate next year.

Dan Pfeiffer, a former senior adviser to Obama, argues that the Covid relief bill is the start of the battle for the 2022 midterms and warns that Democrats cannot take the credit for granted since Americans “currently have the long-term memory of a sea cucumber”.

He wrote in the Message Box newsletter last week that despite Obama’s speeches and visits to factories, “it was nearly impossible to break through the avalanche of bad news”. But “this plan’s benefits are more specific, more easily understood, and likely to be broadly felt before too long”.

Pfeiffer urged grassroots supporters to join Biden and Harris in the messaging effort via social media. “I spent much of 2009 and 2010 banging my head against the proverbial wall because not enough people knew about how Barack Obama had helped prevent the economy from tumbling into a second Great Depression,” he added. “Let’s not do that again.”

The plan will also require strict oversight to ensure money is not misspent or wasted. Donna Brazile, a former interim chair of the Democratic National Committee, said: “It is a massive bill with massive consequences but it requires not just the president and vice-president and cabinet but state and local governments to also work together to ensure that the vaccines are rolled out in an equitable way and ordinary citizens are able to take advantage of some of the wonderful initiatives that are in the bill.”

There has been a striking contrast between Biden and Harris’s disciplined focus on passing historic legislation and Republicans’ fixation on “cancel culture”, from Dr Seuss, after the children’s author’s publishing house announced it was discontinuing several books that contained racist imagery, to confusion over whether the Mr Potato Head toy will still be a “Mr”.

The issue, which often gets more coverage on conservative media than coronavirus relief, is seen as a way of animating the base in a way that attacks on Biden do not. The president is not Black like Obama, nor a woman like Hillary Clinton, nor a democratic socialist like Bernie Sanders, all of which seem to have inoculated him against demonisation by the rightwing attack machine.

And despite its popularity with the public, every Republican senator opposed the American Rescue Plan, offering Biden’s team a chance to score political points. Lanhee Chen, a fellow at the Hoover Institution at Stanford University in Palo Alto, California, said: “It’ll be interesting to see how much they make it about the benefits of the plan versus about Republicans not having voted for the plan.”

Chen, policy director for the 2012 Mitt Romney presidential campaign, added: “The challenge for Democrats is going to be as elements of this come out that will be unpopular, is it going to be defined by the things that are unpopular or the things that would appear to be politically quite favourable?”

The OECD predicts that the rescue plan will help the US economy grow at a 6.5% rate this year, which would be its fastest annual growth since the early 1980s. But as Bill Clinton, George W Bush and Tony Blair discovered, all political honeymoons come to an end.

Republicans are already exploring a new line of attack by accusing the president of ignoring the burgeoning crisis of a surge in children and families trying to cross the southern border. The rare outbreak of unity among Democrats – in the Rose Garden, Biden thanked Sanders for his efforts – is not likely to endure. And the next major item on the legislative wishlist, infrastructure, is likely to be even tougher.

But it is the American Rescue Plan, and the political battle to define it, that could make or break Biden’s presidency. Michael Steel, who was press secretary for former Republican House speaker John Boehner, said: “They’re making a bet on economic recovery and I hope they’re right because I want the US economy to recover swiftly.”

But, he added, “I think that people will continue learning more about the things in this legislation that are not directly related to Covid relief or economic stimulus. There’s definitely a real risk of blowback.”

Steel, now a partner at Hamilton Place Strategies, a public affairs consulting firm, added: “We could be on the on the verge of a new Roaring Twenties with a booming economy and so much pent up demand for people to travel and live and spend money. We could also be priming the pump for a devastating wave of inflation. The economy is generally the number one issue going into an election and there’s a very real chance that we have a tremendous upside or some dangers ahead.”

LONDON — A nightmarish tale of a Senegalese soldier fighting for France in World War I, and a workplace novel set on a spaceship, are among the six … END_OF_DOCUMENT_TOKEN_TO_BE_REPLACED

In 2020, when the world suddenly ground to a halt, most people postponed or canceled all of their plans due to the coronavirus crisis. Many … END_OF_DOCUMENT_TOKEN_TO_BE_REPLACED