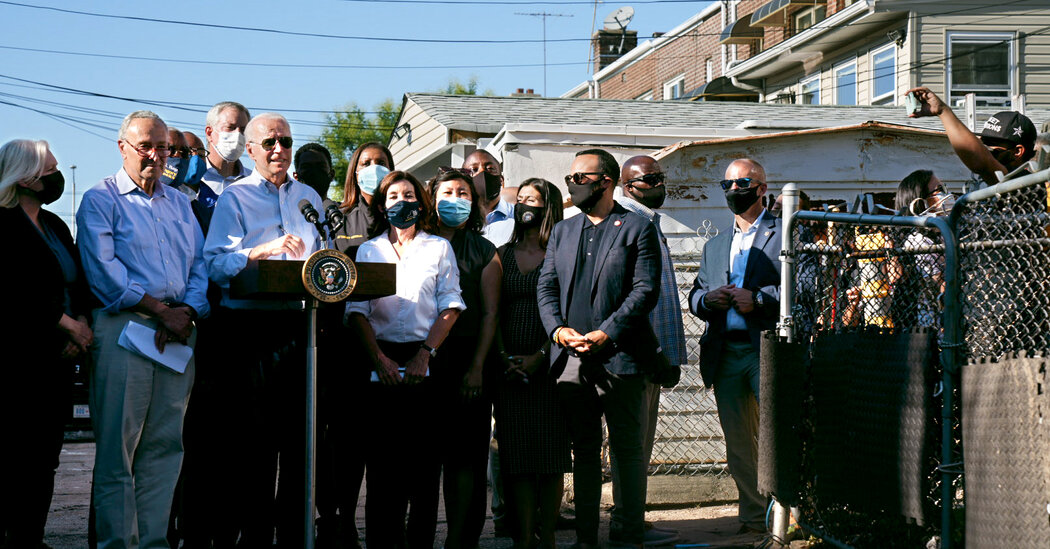 My “Build Back Better” plan with key investments to fight climate change, cutting emissions and make things more resilient. Each dollar we invest, every dollar — we raise a city block by two feet, flood-proof power stations, sanitations, reduction in the buildup of kindling in our forest, installing electrical lines underground rather than overhead — saves us six dollars for every single dollar we spend to do those things.

Because the next time disaster strikes, the flood is contained, the fire doesn’t spread as widely, and power stays on. Not to mention those investments save lives, homes and create good-paying union jobs.

I hosted 56 heads of state in Washington. And I pointed out, we’re talking about climate change, and I said I think of one word when I think of climate change: jobs. Good-paying jobs. Each of these things requires a good-paying job, not $7 or $12 or $15, but $45, $50 an hour plus health care. That’s what is needed. And so, folks — and also, Wall Street, not too far from here, acknowledges that if we spend the money on these things, we’re going to grow the economy, increase employment.

You know, the fire in Oregon sent smoke all the way to the Atlantic. A storm in the Gulf, as you have now figured out, can reverberate 10 states away. Supply chains and crop production get interrupted, driving up costs, devastating industries all over America. This is everybody’s crisis. Everybody’s crisis.

And let me just say, again: The fact is that the damage done on the West Coast, which I’ll be heading to, they’ve already burned five million acres to the ground. That’s bigger than the state of New Jersey, if I’m not mistaken. Five million acres. And you see it by the smoke that ends up coming over the East Coast.

Folks, we’re all in this. It’s about time we stopped the regional fights and understand helping somebody make sure there’s no fewer fires in the West warrants helping people in this alley make sure they’re not flooded.

GREENVILLE, N.C.--(BUSINESS WIRE)--Employers aiming to win the war on talent have a new “A” team to tap into: college and professional athletes. … END_OF_DOCUMENT_TOKEN_TO_BE_REPLACED

Mortgage rates are likely to rise in July, extending a seven-month streak. High inflation, and the Federal Reserve's efforts to control it, have … END_OF_DOCUMENT_TOKEN_TO_BE_REPLACED