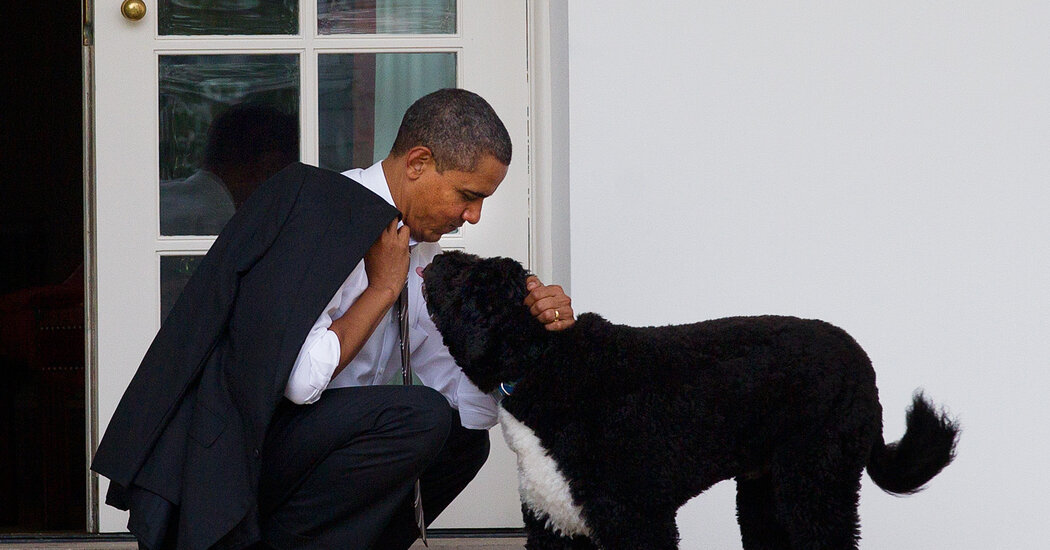 Bo, the Portuguese water dog who became the first presidential pet in the Obama White House, romping in the halls of power, died on Saturday.

Bo, who was 12, had cancer, Michelle Obama said on Instagram. President Barack Obama said the family had lost “a true friend and loyal companion.”

“For more than a decade, Bo was a constant, gentle presence in our lives — happy to see us on our good days, our bad days, and everyday in between,” Mr. Obama wrote on Twitter.

“He tolerated all the fuss that came with being in the White House, had a big bark but no bite, loved to jump in the pool in the summer, was unflappable with children, lived for scraps around the dinner table, and had great hair.”

puppy in April 2009, a gift from Senator Edward M. Kennedy of Massachusetts and his wife, Victoria, to the first children, Malia and Sasha Obama.

The girls named the dog Bo because their cousins had a cat with the same name and because Mrs. Obama’s father was nicknamed Diddley, after the musician Bo Diddley.

President Biden resumed the tradition in January with his two German shepherds, Champ and Major, after President Donald J. Trump’s term ended as the first in decades without any pets living full time at the residence. Major was recently sent for training after a series of biting episodes.

Bo was known for cavorting on the South Lawn in front of the White House press corps, barking at news conferences and attracting fan mail from children across the country.

official White House portrait and was the subject of a children’s book, “Bo, America’s Commander in Leash,” written by Naren Aryal and illustrated by Danny Moore.

In 2013, Bo was joined at the White House by a second Portuguese water dog, Sunny, after Mrs. Obama said that Bo needed more interaction with other dogs.

Mrs. Obama said that although Bo was originally supposed to be a companion for Malia and Sasha, “We had no idea how much he would mean to all of us.”

She said the dog had been a “constant, comforting presence in our lives,” sauntering into their offices “like he owned the place, a ball clamped firmly in his teeth.”

He was there for the traditional Easter egg roll on the South Lawn and when the pope came to visit, she said.

After Malia and Sasha went to college, Bo helped the couple adjust to life as empty nesters, Mrs. Obama said in a post on Instagram that was signed “Michelle, Barack, Malia, Sasha, and Sunny.”

“This past year, with everyone back home during the pandemic, no one was happier than Bo,” she wrote. “All his people were under one roof again — just like the day we got him.”

Listed on April 21 for $2,395,000 with Adam Weissman of Coldwell Banker Bain of Lake Union, the gorgeous four-bedroom brick home was sold on May 6 for … END_OF_DOCUMENT_TOKEN_TO_BE_REPLACED