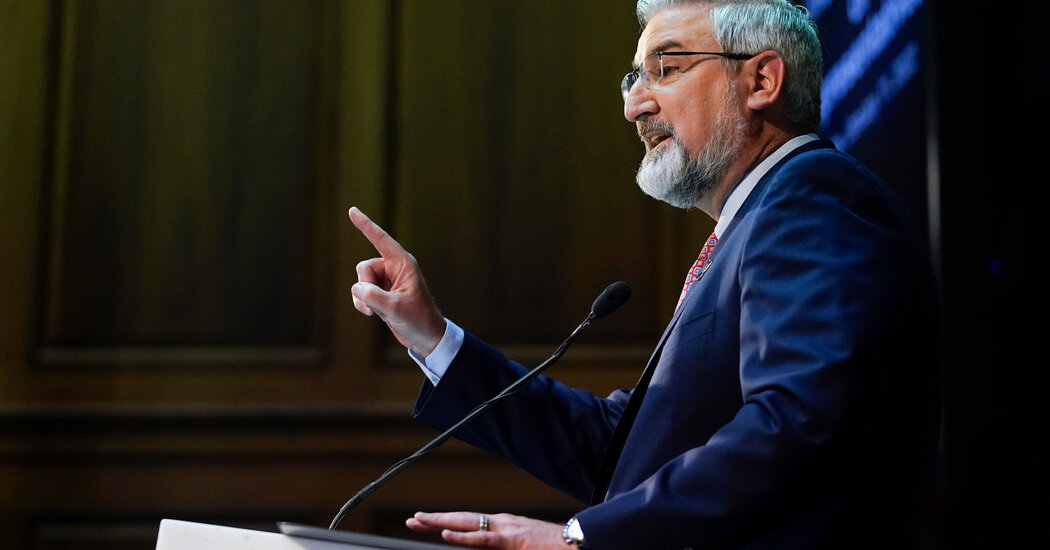 Gov. Eric Holcomb of Indiana vetoed a bill on Monday that would have banned transgender girls from competing in school-sanctioned girls’ sports, taking a sharply different approach to the issue than 11 fellow Republican governors who have signed similar measures into law in recent years.

Mr. Holcomb said the bill, known as H.E.A. 1041, would likely have been challenged in court. He also questioned whether it was solving any pressing issue, writing in a letter to lawmakers that “the presumption of the policy laid out in H.E.A. 1041 is that there is an existing problem in K-12 sports in Indiana that requires further state government intervention.”

“It implies that the goals of consistency and fairness in competitive female sports are not currently being met,” the governor added in his letter. “After thorough review, I find no evidence to support either claim even if I support the overall goal.”

Sports participation by transgender girls and women has become an increasingly divisive topic among political leaders and sports sanctioning groups, which have struggled with the issue in a way that respects transgender athletes and addresses concerns some critics have raised about competitive fairness. Last week, Lia Thomas, a member of the University of Pennsylvania’s women’s swimming team, became the first openly transgender woman to win an N.C.A.A. swimming title.

The bill in Indiana, where the Republican-controlled Legislature passed it by comfortable margins, was cheered by some conservatives in the state. After its passage, the state’s Republican attorney general, Todd Rokita, called it “an important step in protecting youth sports.”

“We welcome the opportunity to defend this law if challenged in court,” Mr. Rokita said.

Democrats and transgender activists have largely criticized the rush of legislation as cruel and unnecessary. Some of them praised Mr. Holcomb for his veto, even as they raised concerns that legislators in Indiana might override it.

“Governor Holcomb did the right thing tonight in vetoing a bill that would only cause problems, not solve them, by targeting Indiana’s transgender children and making them the targets of exclusion and discrimination in their own schools,” said Cathryn Oakley, the state legislative director and senior counsel for the Human Rights Campaign.

That law was presented as a way to protect religious business owners from having to provide cakes and flowers to same-sex weddings, but it unleashed fierce opposition, including from some of Indiana’s most prominent businesses. It was quickly rewritten to explicitly ban discrimination based on sexual orientation or gender identity.

Mr. Holcomb, whom Mr. Pence appointed as lieutenant governor after the backlash to the religious freedom law, stepped in as the Republican nominee for governor in 2016 after Mr. Pence was selected as Donald J. Trump’s running mate.

During his time as governor, Mr. Holcomb has embraced many conservative policies, including a measure he signed Monday allowing people in Indiana to carry handguns without a permit. But he has sometimes taken a more moderate stance than other Republicans, frustrating some conservatives with virus restrictions in the early stages of the pandemic.

Across the country, many Republicans have embraced laws restricting transgender sports participation, but Mr. Holcomb is not alone in his party in rejecting such measures.

Gov. Doug Burgum of North Dakota, a Republican, vetoed a similar bill a year ago. And in Utah, Gov. Spencer Cox, also a Republican, is expected to veto a bill that would have barred young transgender athletes from participating in girls’ sports.

Mr. Cox said he had been blindsided on March 4 by state lawmakers in his own party when they approved a last-minute version of the bill and bypassed negotiations with Democrats and transgender-rights advocates, who had spent weeks working on a compromise.

After lawmakers approved the legislation, Mr. Cox addressed the transgender community in a news conference, saying: “We care about you. We love you. It’s going to be OK. We’re going to get through this together.”

AUSTIN, Texas--(BUSINESS WIRE)--As the first multifamily management company to be recognized in the Public Relations and Marketing Excellence Awards, … END_OF_DOCUMENT_TOKEN_TO_BE_REPLACED

There have been whispers of cooling housing and rental prices in the San Francisco Bay Area, but that hasn't yet translated into practical, noticeable … END_OF_DOCUMENT_TOKEN_TO_BE_REPLACED

Cars pass in Independence Square at twilight in Kyiv, Ukraine, Monday, Oct. 31, 2022. Rolling ... [+] blackouts are increasing across Ukraine as the … END_OF_DOCUMENT_TOKEN_TO_BE_REPLACED