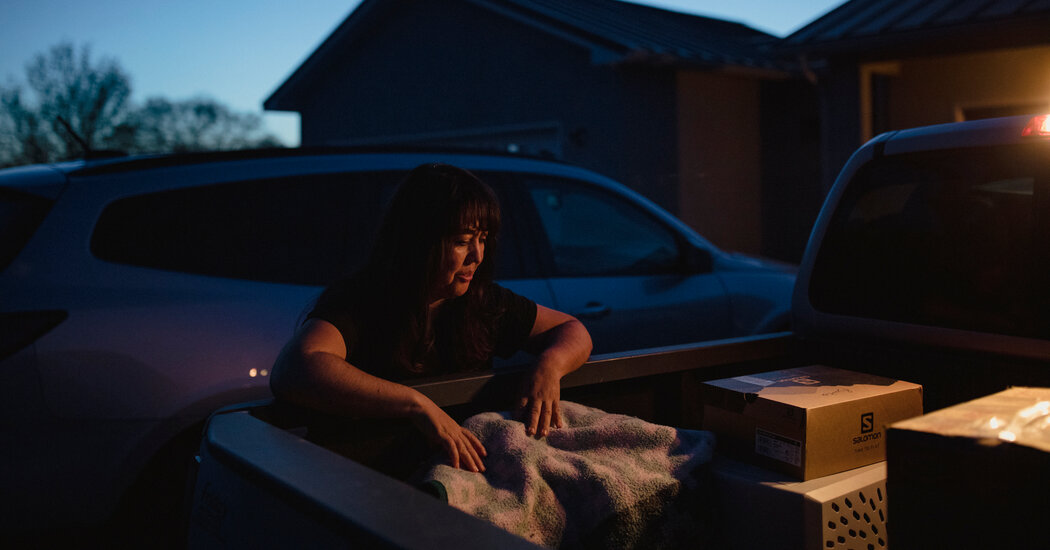 LAS VEGAS, N.M. — As rushing flames neared the remote mountains where his family has lived for generations, Miguel Martinez knew he had to move fast and flee with only the clothes on his back.

“I left behind 25 goats, 50 rabbits, 10 chickens and two dogs,” said Mr. Martinez, 71, who escaped his home in the village of El Oro this week for an evacuee shelter. “I have no idea if my house is standing or if my animals are alive. I need to prepare for the possibility everything was wiped out.”

More than a dozen wildfires are raging this month across the Southwest, as fire season stretches earlier than ever into spring. But the country’s largest active blaze, a megafire that has ballooned across more than 165,000 acres in northern New Mexico, has evolved with such ferocity that it threatens a multigenerational culture that has endured for centuries.

Like Mr. Martinez, many who have fled the megafire, known as the Calf Canyon/Hermits Peak fire, are descendants of Hispanic settlers who arrived in New Mexico long before the United States came into existence. They intermarried with Native Americans, honed ways to grow crops in parched lands and preserved an archaically influenced form of Spanish that can still be heard in the aisles of the local Walmart.

1,200 years, marked by intense and unwieldy fire activity, is something new.

ranks as the second largest on record in New Mexico, eclipsing the acreage lost to fires in the entire state in 2021. While no lives have been lost, the fire has destroyed at least 172 homes, forced many families to evacuate and remains just 20 percent contained. As dry weather persists, authorities warn that the fire could expand in various directions in the coming days.

approved a disaster declaration for five counties. The state’s blazes include the Cooks Peak fire, which has grown to 59,000 acres in Mora County, and the Cerro Pelado fire, a 29,000-acre blaze within 5.5 miles of Los Alamos National Laboratory, which helps to design and maintain the country’s nuclear weapons stockpile.

As flames from the Calf Canyon/Hermits Peak fire could be seen on ridges from Las Vegas in recent days, officials evacuated the nearby United World College, a boarding school founded by the industrialist Armand Hammer, and emptied out the county jail, releasing some inmates and transferring others.

the state’s 700 or so acequias, or irrigation ditches, said she attributed her community’s persistence to “pure grit.”

term she defined as “a cultural longing, a pull, that keeps us there.”

Relations between ethnic groups have evolved since then. But unlike other parts of the United States where Hispanics are viewed as newcomers and Anglos seek to defend their culture from demographic shifts, in northern New Mexico the roles are often reversed.

“We bought our land back in 1993, but we’re still considered outsiders compared to many of our neighbors,” said Sonya Berg, 79, a retired teacher from Texas whose home in Rociada, a town of several hundred people, was destroyed by the fire.

Still, Ms. Berg said she understood why some families remained in the area for generations, explaining that their land had been so important to her husband, who died in 2019, that his gravesite is on their fire-scorched property.

Given the fire’s erratic behavior, it is not clear when evacuees will be allowed back. Wendy Mason, a New Mexico wildfire prevention official, said it was the first time, at least in recent memory, that so many large fires were raging at once in the state. Ms. Mason also cautioned that more fires could start in the coming weeks.

“We usually don’t expect much moisture until the monsoons arrive, and that’s generally not until July or August,” Ms. Mason said. Even if some rain falls, as it did in parts of the state over the weekend, it could be accompanied by lightning strikes that ignite other blazes, she warned.

Still, Mr. Martinez, the state historian, emphasized that such challenges were part of the region’s history. Mora was burned to the ground, he noted, by invading American forces in 1847 during the Mexican-American War. After that episode, the community picked up the pieces and started again.

“This isn’t the first fire our families have dealt with,” he said.

Local officials and housing advocates worry about what the damaged housing stock will mean for people with low wages or fixed incomes. In interviews, … END_OF_DOCUMENT_TOKEN_TO_BE_REPLACED