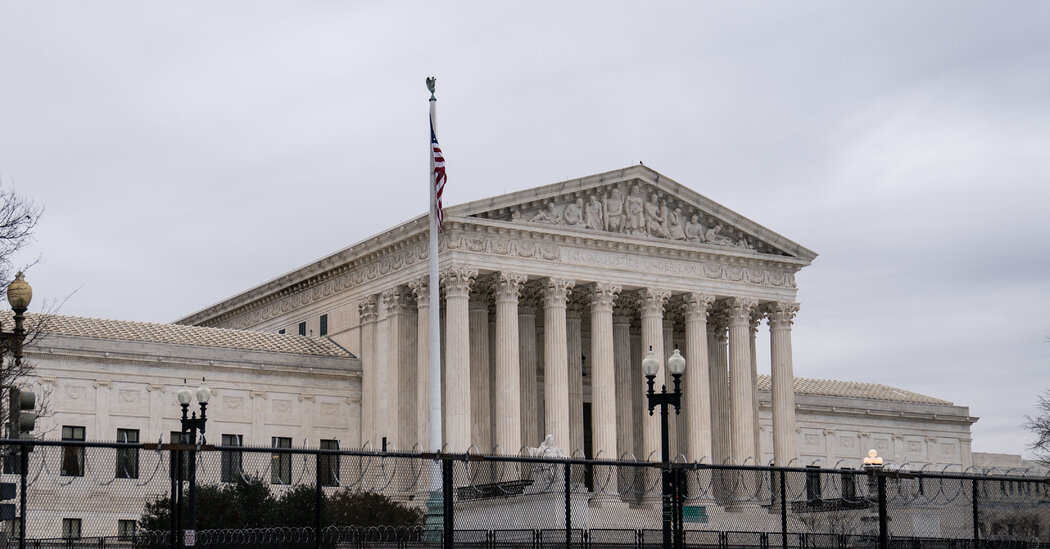 WASHINGTON — The Supreme Court late Friday night lifted California’s restrictions on religious gatherings in private homes, saying they could not be enforced to bar prayer meetings, Bible study classes and the like. The court’s brief, unsigned order followed earlier ones striking down limits on attendance at houses of worship meant to combat the coronavirus.

The vote was 5 to 4, with Chief Justice John G. Roberts Jr. joining the court’s three liberal members in dissent.

The unsigned majority opinion expressed impatience with the federal appeals court in California, the United States Court of Appeals for the Ninth Circuit, saying it had repeatedly disregarded the Supreme Court’s instructions. “This is the fifth time the court has summarily rejected the Ninth Circuit’s analysis of California’s Covid restrictions on religious exercise,” the opinion said.

ruled against them, reasoning that the law imposed limits on all private gatherings, defined as “social situations that bring together people from different households at the same time in a single space or place,” and did not single out religious services.

A divided three-judge panel of the Ninth Circuit, in San Francisco, refused to block that ruling while an appeal moved forward. It did not matter, the majority reasoned, that some commercial activities were arguably treated more favorably than private gatherings in homes.

“The state reasonably concluded that when people gather in social settings, their interactions are likely to be longer than they would be in a commercial setting; that participants in a social gathering are more likely to be involved in prolonged conversations; that private houses are typically smaller and less ventilated than commercial establishments; and that social distancing and mask-wearing are less likely in private settings and enforcement is more difficult,” Judges Milan D. Smith Jr. and Bridget S. Bade wrote, summarizing the trial court’s findings.

In dissent, Judge Patrick J. Bumatay wrote that the state was not free to impose harsher restrictions on religious study than on “barbershops, tattoo and nail parlors, and other personal care businesses.”

“The one thing California cannot do is privilege tattoo parlors over Bible studies when loosening household limitations,” he wrote.

“The Constitution shields churches, synagogues and mosques not because of their magnificent architecture or superlative acoustics, but because they are a sanctuary for religious observers to practice their faith,” Judge Bumatay wrote. “And that religious practice is worthy of protection no matter where it happens.”

have often divided federal judges along partisan lines. But all three judges on the Ninth Circuit panel were appointed by Republican presidents.

In asking the Supreme Court to intervene, the challengers called the majority’s reasoning “head-scratching.” The question was not, they said, whether “in-home birthday parties or Super Bowl gatherings” were limited along with religious services in private homes. It was whether such services were treated worse than activities like shopping, travel on public transportation and personal care.

“There is zero evidence,” they told the justices, “that an indoor Bible study is riskier than a trip to the movies, dinner in a restaurant, a workout in a gym or a gathering with dozens of friends at a winery, brewery, distillery or bowling alley.”

Lawyers for the state responded that its policy “is entirely neutral toward religion; it applies to gatherings for any purpose — secular or religious.”

They added that the restrictions would be significantly modified on April 15, allowing the challengers to conduct services for as many as 25 people. The new policy, they wrote, “fully accommodates the gatherings that plaintiffs wish to host.”

Last year, before the death of Justice Ruth Bader Ginsburg, the Supreme Court allowed the governors of California and Nevada to restrict attendance at religious services. In a pair of 5-to-4 orders, Chief Justice Roberts joined what was then the court’s four-member liberal wing to form majorities.

The court changed course in November, after the arrival of Justice Amy Coney Barrett, in a case from New York. The majority barred restrictions on religious services in New York that Gov. Andrew M. Cuomo had imposed to combat the coronavirus.

AUSTIN, Texas--(BUSINESS WIRE)--As the first multifamily management company to be recognized in the Public Relations and Marketing Excellence Awards, … END_OF_DOCUMENT_TOKEN_TO_BE_REPLACED

There have been whispers of cooling housing and rental prices in the San Francisco Bay Area, but that hasn't yet translated into practical, noticeable … END_OF_DOCUMENT_TOKEN_TO_BE_REPLACED

Cars pass in Independence Square at twilight in Kyiv, Ukraine, Monday, Oct. 31, 2022. Rolling ... [+] blackouts are increasing across Ukraine as the … END_OF_DOCUMENT_TOKEN_TO_BE_REPLACED