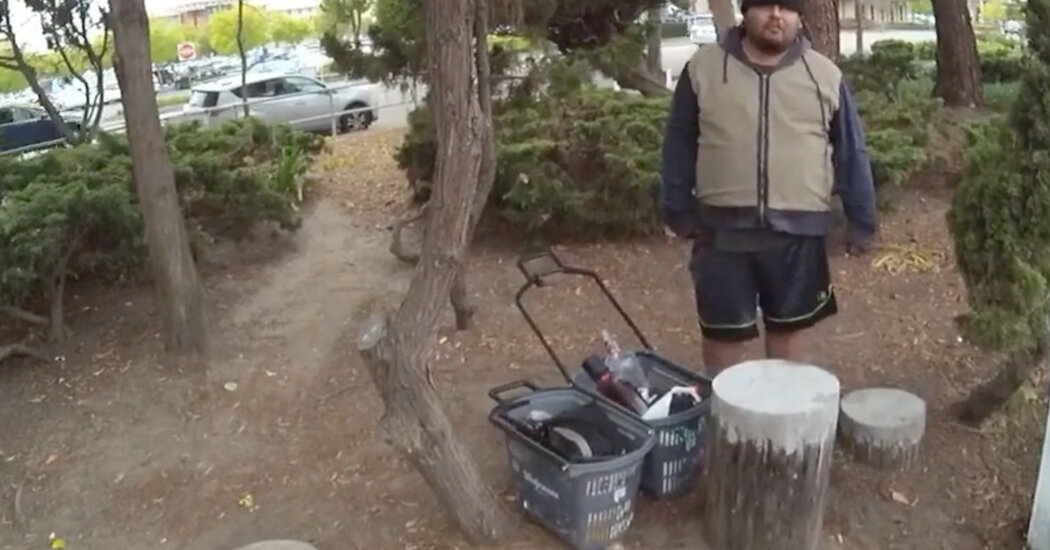 The officers eventually push Mr. Gonzalez to the ground facedown and handcuff him. “What are we going to do?” the first officer asks. “Just keep him pinned down?”

The first officer asks for Mr. Gonzalez’s last name and his birthday and tells him to keep talking. He answers in whimpered bursts and later begins grunting. At one point, he seems to say, “Please don’t do it.”

After about four and a half minutes of body camera footage showing Mr. Gonzalez pinned to the ground, a third officer is seen on his legs. When one officer asks if they should roll him on his side, another replies, “I don’t want to lose what I got.”

Seconds later, the officers notice that Mr. Gonzalez has become unresponsive. They roll him onto his side and then push him onto his back and begin chest compressions after checking for a pulse.

After emergency medical workers respond, the first officer explains that they administered Narcan, which can reverse overdoses. “He went from combative to nonresponsive almost immediately,” he says.

Several experts testified during Mr. Chauvin’s trial that the prone position was dangerous because it could impair breathing and that officers should put people they are detaining onto their sides as quickly as possible.

The three officers put on leave were Eric McKinley, Cameron Leahy and James Fisher, a city spokeswoman said on Tuesday. When asked for more details about the death of Mr. Gonzalez, she pointed to the Police Department’s previous news releases about the encounter.

AUSTIN, Texas--(BUSINESS WIRE)--As the first multifamily management company to be recognized in the Public Relations and Marketing Excellence Awards, … END_OF_DOCUMENT_TOKEN_TO_BE_REPLACED

There have been whispers of cooling housing and rental prices in the San Francisco Bay Area, but that hasn't yet translated into practical, noticeable … END_OF_DOCUMENT_TOKEN_TO_BE_REPLACED

Cars pass in Independence Square at twilight in Kyiv, Ukraine, Monday, Oct. 31, 2022. Rolling ... [+] blackouts are increasing across Ukraine as the … END_OF_DOCUMENT_TOKEN_TO_BE_REPLACED