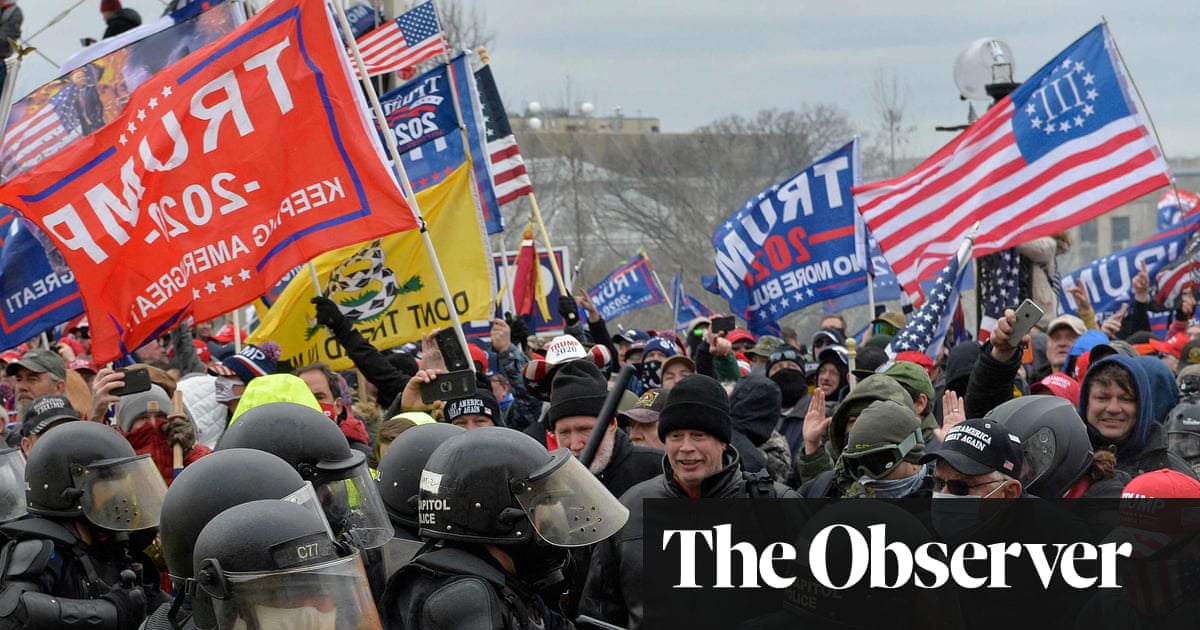 The neo-fascist Proud Boys deployed a large contingent in Washington on 6 January, the day of the US Capitol attack, with more than 60 “participating in” an encrypted messaging channel called “Boots on the Ground”, a federal indictment says.

The indictment, which includes conspiracy charges against four men described as leaders of the far-right group, presents fresh evidence of how officials believe members planned and carried out a coordinated attempt to stop Congress certifying Joe Biden’s electoral victory over Donald Trump.

At least 19 leaders, members or associates of the Proud Boys have been charged in federal court with offenses related to the 6 January riot, which resulted in five deaths. More than 300 people have been charged in total. Trump was impeached for the inciting the insurrection but was acquitted after only seven Republican senators broke ranks to vote to convict him.

The indictment unsealed on Friday also suggests that the Proud Boys, whom Trump told to “stand back and stand by” during a presidential debate last year, were discussing what they would do after he left the White House.

“We need to start planning and we are starting planning for a Biden presidency,” one alleged leader wrote after the Capitol invasion, according to the indictment.

Just two days before the Capitol attack, the Proud Boys’ leader, Enrique Tarrio, was arrested in Washington, charged with vandalizing a Black Lives Matter banner at a historic Black church, and ordered to stay out of the District of Columbia.

The Proud Boys reacted with alarm, one alleged leader warning that communications could be “compromised”, telling members they could be “looking at Gang charges” and suggesting they “stop everything immediately”, according to the indictment.

But they regrouped, creating fresh encrypted channels to communicate and advising members to meet at the Washington Monument at 10am on 6 January, according to the indictment. One alleged leader told members on 5 January to “avoid getting into any shit tonight. Tomorrow’s the day.” Proud Boys were repeatedly warned not to wear their typical black and yellow colors. “Cops are the primary threat,” one channel was warned on the night before the attack.

On 6 January, the Proud Boys marched to the Capitol before Trump finished addressing thousands of supporters near the White House.

About two hours later, just before Congress convened a joint session to certify the election results, a group of Proud Boys followed a crowd who breached barriers at a pedestrian entrance to the Capitol grounds, the indictment says. Several Proud Boys entered the Capitol after the mob smashed windows and forced open doors.

A Wall Street Journal investigation of video footage found Proud Boys members were “key instigators”, at the “forefront” in many pivotal moments.

The messages in the indictment show the Proud Boys using military language before and during the attack, one asking if leaders should hold a “commander’s briefing” before gathering at the Washington Monument.

At 3.38pm, Charles Donohoe, an alleged leader of a chapter in North Carolina, announced on the Boots on the Ground channel that he and others were “regrouping with a second force” as some rioters began to leave the Capitol, according to the indictment.

Ethan Nordean and Joseph Biggs, two of the four defendants charged, were arrested several weeks ago on separate but related charges. A day before the riots, Biggs posted on the Boots on the Ground channel that the group had a “plan”, according to the new indictment, which also charges Donohoe and Zachary Rehl, described as leader of a chapter in Pennsylvania.

“This was not simply a march,” the assistant US attorney Jason McCullough said in a recent hearing for Nordean’s case. “This was an incredible attack on our institutions of government.”

All four defendants are charged with conspiring to impede certification of the electoral college vote. Other charges include obstruction of an official proceeding, obstruction of law enforcement during civil disorder and disorderly conduct.

The defendants carried out their conspiracy in part by obtaining paramilitary gear and supplies, including tactical vests, protective equipment and radio equipment, according to the indictment.

Prosecutors have said the Proud Boys arranged to communicate using Baofeng radios, Chinese-made devices that can be programmed for use on hundreds of frequencies, making it difficult for outsiders to eavesdrop.

A lawyer for Biggs declined to comment. Attorneys for the other three men didn’t immediately respond to messages.

In Nordean’s case, a federal judge accused prosecutors of backtracking on claims that he instructed Proud Boys members to split up into smaller groups and directed a “strategic plan” to breach the Capitol.

“That’s a far cry from what I heard at the hearing today,” the US district judge Beryl Howell said on 3 March.

Howell concluded that Nordean was extensively involved in “pre-planning” for the events of 6 January and that he and other Proud Boys “were clearly prepared for a violent confrontation”. However, she said evidence that Nordean directed other Proud Boys members to break into the building was “weak to say the least” and ordered him freed from jail before trial.

Proud Boys members describe themselves as “western chauvinists” and have engaged in street fights with antifascist activists. The Vice Media co-founder Gavin McInnes, who founded the Proud Boys in 2016, sued the Southern Poverty Law Center for labeling it a hate group.

“Wearing tactical gear and armed with a canister of pepper spray gel marketed as 67 times more powerful than hot sauce, Worrell advanced, shielded himself behind a wooden platform and other protestors and discharged the gel at the line of officers,” prosecutors wrote in a court filing.

His defense attorney John Pierce argued his client wasn’t aiming at officers and was only there in the crowd to exercise his free speech rights.

“He’s a veteran,” Pierce said. “He loves his country.”

Hometown Deli, Paulsboro, N.J.Mike Calia | CNBCThree men were charged with fraud and other crimes in a scheme involving a company that was worth $100 … END_OF_DOCUMENT_TOKEN_TO_BE_REPLACED

Even before Jens Rasmussen and Maria Aparo decided to spend their lives together, they shared several experiences. Both, for instance, have enjoyed … END_OF_DOCUMENT_TOKEN_TO_BE_REPLACED