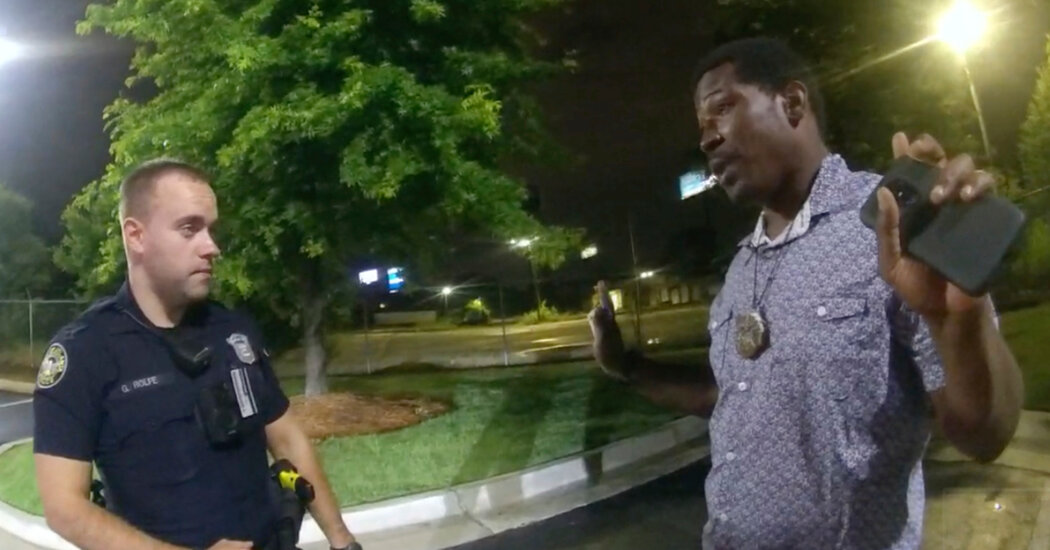 ATLANTA — More than two years after Rayshard Brooks, a 27-year-old Black man, was fatally shot by a white police officer in the parking lot of an Atlanta fast-food restaurant, a prosecutor has determined that the officer who fired, as well as another officer on the scene, “committed no crimes” in the incident.

The decision to drop charges against the two Atlanta officers was announced in a news conference on Tuesday by Pete Skandalakis, a veteran former Georgia prosecutor appointed to handle the case by Chris Carr, the Georgia attorney general. Mr. Skandalakis and another former prosecutor, Danny Porter, presided over a multimedia presentation about the June 2020 incident, which showed how Mr. Brooks, after resisting being handcuffed, sparked a violent fight with the officers, during which Mr. Brooks took Officer Devin Brosnan’s Taser and fired it at the officers.

The prosecutors said that these actions gave the other officer, Garrett Rolfe, justification to use deadly force. Mr. Rolfe fired three shots at Mr. Brooks, hitting him twice, in the back and buttocks.

“It is my conclusion that the use of deadly force was objectively reasonable and that they did not act with criminal intent,” Mr. Porter said.

Mr. Rolfe was initially charged with 11 counts, including murder, and Mr. Brosnan faced a number of lesser charges. The prosecutors said they would move to vacate those charges. Mr. Rolfe was fired from the Police Department the day after the shooting, but reinstated in May 2021 by the city’s civil service review board. Both men have been on paid administrative leave pending resolution of their case.

Now that the resolution has come, it seems unlikely to settle a matter that triggered a period of intense protest and institutional instability in Atlanta, a city with a sizable Black population that considers itself an unofficial capital of the civil rights movement. Mr. Brooks was killed a few weeks after the murder of George Floyd by a Minneapolis police officer. The Atlanta killing sparked fresh rounds of street demonstrations and became part of the broader national debate about the treatment of Black Americans at the hands of the police.

At the time, Stacey Abrams, the current Democratic candidate for Georgia governor, called the incident a “murder.” Donald J. Trump, then the president, also weighed in, saying that people should not resist police officers. Mr. Trump also said he hoped Mr. Rolfe “gets a fair shake” in the legal system.

In the wake of the shooting, the Atlanta police chief at the time, Erika Shields, resigned, and the Wendy’s restaurant where the incident occurred was burned down. The area around the site was dominated for days by protesters, some of whom were armed and threatened passers-by. On July 4, 2020, an 8-year-old girl, Secoriea Turner, was fatally shot while being driven through the area in an SUV.

As Mr. Porter noted, the police encounter with Mr. Brooks began cordially in the parking lot of a Wendy’s restaurant in South Atlanta, as Mr. Brosnan responded to a 911 call. Restaurant patrons had complained that Mr. Brooks had fallen asleep, while behind the wheel of his car, in the drive-through lane. The interaction with Mr. Brooks remained businesslike as Mr. Rolfe subjected him to a drunken-driving breath test, which Mr. Brooks failed.

But as Mr. Rolfe moved to handcuff Mr. Brooks and place him under arrest, Mr. Brooks lunged forward, instigating a brawl that left Mr. Brosnan with a concussion. Mr. Brooks stole Mr. Brosnan’s Taser and shot him with it. As Mr. Brooks ran away, he pointed and fired the Taser at Mr. Rolfe, who then fired his handgun at Mr. Brooks.

In an interview on Tuesday, Gerald A. Griggs, the president of the Georgia N.A.A.C.P., criticized the decision by Mr. Skandalakis, and called upon Atlanta residents to push for a new prosecutor to be appointed who would take the case to a grand jury. Mr. Griggs said that shooting Mr. Brooks might have been justified just at the point when he was fighting with the officers. But Mr. Griggs noted that Mr. Brooks was shot while he was running away.

“He wasn’t a threat to anybody at that point,” Mr. Griggs said.

Video shows that while Mr. Brooks was running from the officers, he turned his body and aimed the Taser at Mr. Rolfe. “When Brooks takes the Taser, he now becomes basically a person with an offensive position,” Mr. Skandalakis said. “He can incapacitate the officers. A Taser in the hands of a person who is not trained can also be deadly.”

Some observers have noted that at the time Mr. Rolfe fired his handgun, Mr. Brooks had expended the two shots that the Taser was capable of firing, essentially rendering it ineffective.

But Mr. Skandalakis cited a ruling from the 11th Circuit Court of Appeals that says that such situations must be judged “through the eyes of the officer on the scene,” rather than from the comfort of an office or desk, where one has the benefit of hindsight and doesn’t have the pressure of having to make split-second, life and death decisions.

Mr. Skandalakis said it was reasonable to assume that Mr. Rolfe might not have counted the number of times the Taser was fired in the midst of the violent incident that played out in a matter of seconds.

Mr. Skandalakis refuted earlier assertions made by Paul L. Howard Jr., the former Fulton County district attorney, that Mr. Rolfe had kicked Mr. Brooks after the shooting and that the two officers had declined to render first aid to Mr. Brooks. Mr. Skandalakis said that the “frame by frame analysis” of video footage showed no evidence of a kicking, and that a number of witnesses saw the officers trying to render medical aid.

In an interview on Tuesday, Gymaco Brooks, 50, Mr. Brooks’s cousin, said he was disheartened by the decision and disputed the idea that a Taser should be considered a deadly weapon: “Some things just don’t make sense,” he said.

Amanda Clark Palmer, a lawyer for Mr. Brosnan, said in a statement on Tuesday that the decision was “long overdue.”

“Despite his own injuries,” she said, Mr. Brosnan “called for and personally rendered aid to Mr. Brooks after the shooting. At no point did he assault or abuse Mr. Brooks.”

Noah H. Pines, a lawyer for Mr. Rolfe, said that his client was “relieved.”

Mr. Pines also accused Mr. Howard, the former district attorney, of charging the men for political reasons. Mr. Howard, who could not be reached for comment on Tuesday, was involved in a tight re-election bid at the time in a race that was won by Fani T. Willis, the current Fulton County district attorney.

In January, Ms. Willis wrote to Mr. Carr, the state attorney general, alleging that Mr. Howard had engaged in misconduct, including using videos of the Brooks shooting in campaign commercials in violation of state bar association rules. As a result, Ms. Willis argued, there was “sufficient question of the appropriateness” of the Atlanta-based prosecutor’s office to continue handling the case.

Ms. Willis asked Mr. Carr to refer the case to a special prosecutor. He initially declined, but the courts eventually sided with Ms. Willis, prompting Mr. Carr to choose Mr. Skandalakis, a former prosecutor for a stretch of West Georgia who currently serves as the executive director of the Prosecuting Attorneys’ Council of Georgia.

At the news conference, a reporter noted that Mr. Skandalakis and Mr. Porter, a former prosecutor in suburban Gwinnett County, were both white men, and another reporter asked if race played any role in the shooting.

“I don’t change the facts based on the color of a person’s skin,” Mr. Skandalakis said. He added: “I do not think this shooting was racially motivated.”

SHERMAN OAKS, Calif.--(BUSINESS WIRE)--When it comes to choosing a property management company, the size of a company often becomes a sticking point … END_OF_DOCUMENT_TOKEN_TO_BE_REPLACED

An alternative way to get Original Medicare coverage, Medicare Advantage plans offer coverage that is equal to or greater than that of Medicare Parts … END_OF_DOCUMENT_TOKEN_TO_BE_REPLACED