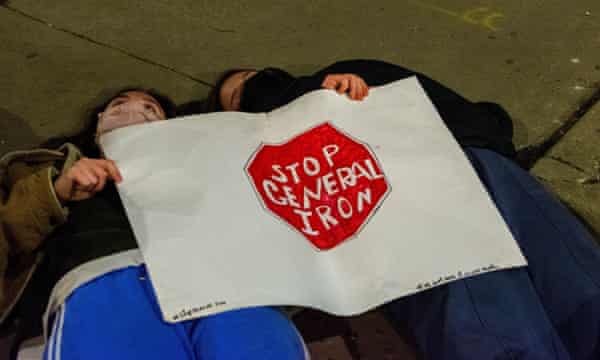 On the 30th and last day of their hunger strike, activists from Chicago’s Southeast Side held a vigil.

Mourning the health of the hunger strikers who have gone without food for a month, demonstrators clad in funeral attire carried a fake casket on Thursday through Logan Square, the North Side neighborhood where Mayor Lori Lightfoot lives. Southeast Side organizers and residents are demanding the city stop a metal shredder from operating in a Latino neighborhood already overburdened by pollution.

Chavez is among eight people who joined the hunger strike after 4 February, when three organizers announced they would go as long as it took to stop Southside Recycling from operating. Chavez said she experienced severe weight loss, headaches, muscle pains, and anxiety attacks during her 25 days not eating solid foods.

Lightfoot has come under fire for aiding the owners of General Iron, a controversial metal scrapper in an affluent white neighborhood, in closing the facility last year – and then allowing the business to construct a new metal recycling plant in a low-income Black and brown community across town. The mayor wrote a letter on 23 February acknowledging the hunger strike and the environmental racism the East Side neighborhood faces, but stopped short of denying the final permit needed for Southside Recycling to operate. Hunger strikers called the letter “insulting” in their own statement.

Thursday’s rally drew more than 200 people from across the city. It started at a church outside Lightfoot’s block, which was heavily blockaded by police, and snaked through the streets of Logan Square. Protesters wore “Stop General Iron” masks and carried signs saying “We deserve clean air!” and “Ecological devastation is immoral”. At one point, they stopped traffic at a busy intersection.

Many of the speakers were students from George Washington high school, located half a mile from the proposed facility. “There’s no reason why I should starve for a week to get Lori’s attention,” said Gregory Miller, a 15-year-old student organizer.

The defunct General Iron site was rife with controversy. The scrapyard violated US Environmental Protection Agency standards in 2018, 2012 and 2006 and was widely regarded by neighbors as a nuisance. “There was a near constant rumble of massive machinery, and our facility manager had to replace external air filters weekly,” said a spokesperson from Paws Chicago, a nearby animal shelter.

The particulate matter that often escapes these types of businesses can lead to severe heart and lung conditions, according to Dr Susan Buchanan, public health professor at the University of Illinois-Chicago. Reserve Management Group (RMG), the metal recycling company that owns General Iron and Southside Recycling, is adamant that the pollution controls at the new site will be enough to keep residents safe. “We’ve been made a target, but we are not the enemy,” wrote Steve Joseph, CEO of RMG, in an op-ed.

Chicago’s Southeast Side has a long history of environmental pollution. The steel mills that once attracted immigrants to the neighborhood with good-paying jobs are gone now, due to manufacturing jobs moving overseas in the 1980s. But the area is still home to toxic industries pouring a million pounds of heavy metals into the air every year.

Oscar Sanchez lost about 20lb from participating in the hunger strike all 30 days. His grandmother, a recent widow who has suffered from Covid-19, called him before the rally. “She’s hooked up to an air tank, [because] the only air she can breathe is not from the Southeast Side.”

But she was more concerned for her grandson, according to Sanchez. “She said, ‘I miss your grandpa. Don’t make me miss you too.’”

A Jewish-Australian AccentReading your letter really resonated with me. Not because I am Asian-Australian myself, but because I undeniably have what I … END_OF_DOCUMENT_TOKEN_TO_BE_REPLACED

He's a legend in New Jersey high school wrestling – and a mystery in the stock market.Paul Morina, the principal of Paulsboro, New Jersey, High … END_OF_DOCUMENT_TOKEN_TO_BE_REPLACED