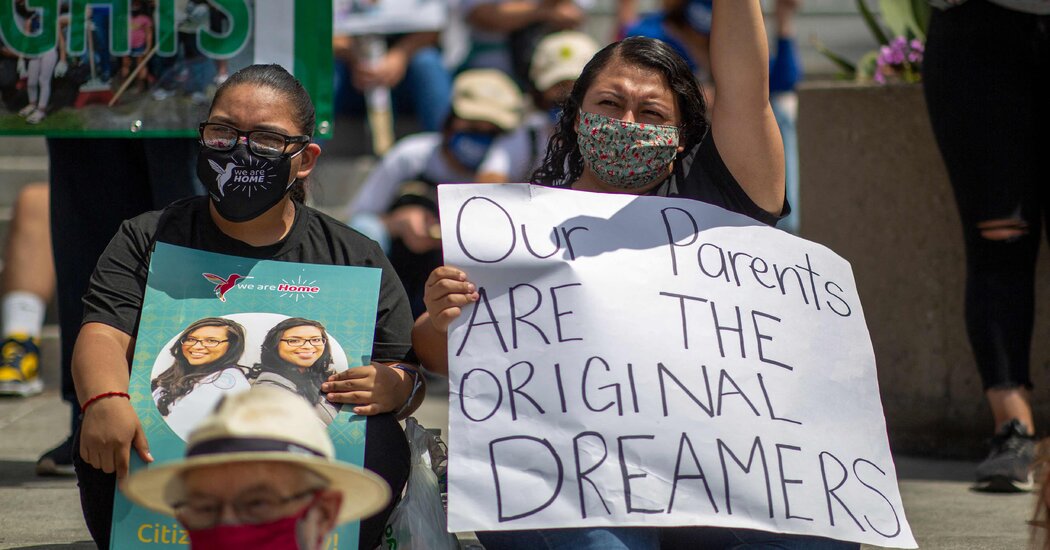 The America’s Children Act is the first effort to create a path to citizenship for documented Dreamers that has broad bipartisan support in the House and Senate. The Senate bill is co-sponsored by three Democrats who sit on the Judiciary Committee and have jurisdiction over immigration legislation, including the chairman, Senator Dick Durban of Illinois. The Republican Senators Rand Paul of Kentucky and Susan Collins of Maine are also co-sponsors.

Democrats hope to pass broad immigration reform, including for documented Dreamers, through the $3.5 trillion social policy package, but it is unclear whether it will ultimately be included. Because Democrats are seeking to pass the bill through a unilateral maneuver known as budget reconciliation, the Senate parliamentarian, who is the chamber’s top rules enforcer, will ultimately rule on whether including an overhaul of immigration law in the economic package would violate a Senate rule dating back to the mid-1980s.

Representative Deborah Ross, Democrat of North Carolina, who led the effort to introduce stand-alone legislation to protect documented Dreamers and co-sponsored the House bill, said that she thought the case for including immigration reform in the legislation was clear. She cited the tens of billions of dollars in growth that experts have estimated that documented Dreamers alone would add to the economy if allowed to live in the United States.

Mr. Patel, a clinical pharmacist in Illinois, has been able to stay in the United States, first on a student visa and now on an employer-sponsored work visa. But many in his position are not able to find alternative visas and must leave the country. And Mr. Patel still must renew his current visa every three years. The process is challenging because the terms of a nonimmigrant visa require the applicant to demonstrate that they do not intend to settle permanently in the United States.

“In my case and that of many others, it’s almost impossible to do that when you’ve lived in America for basically your whole life,” Mr. Patel said.

He began Improve the Dream to create a supportive community for other families in his position, he said, many of whom were afraid to speak up for fear that they might lose what immigration status they had. The organization grew quickly, and ultimately helped draft the America’s Children Act.

“I have confidence that documented Dreamers won’t be ignored anymore,” Mr. Patel said. “This broad bipartisan support shows that this solution should be included in any efforts at immigration reform.”

GREENVILLE, N.C.--(BUSINESS WIRE)--Employers aiming to win the war on talent have a new “A” team to tap into: college and professional athletes. … END_OF_DOCUMENT_TOKEN_TO_BE_REPLACED

Mortgage rates are likely to rise in July, extending a seven-month streak. High inflation, and the Federal Reserve's efforts to control it, have … END_OF_DOCUMENT_TOKEN_TO_BE_REPLACED