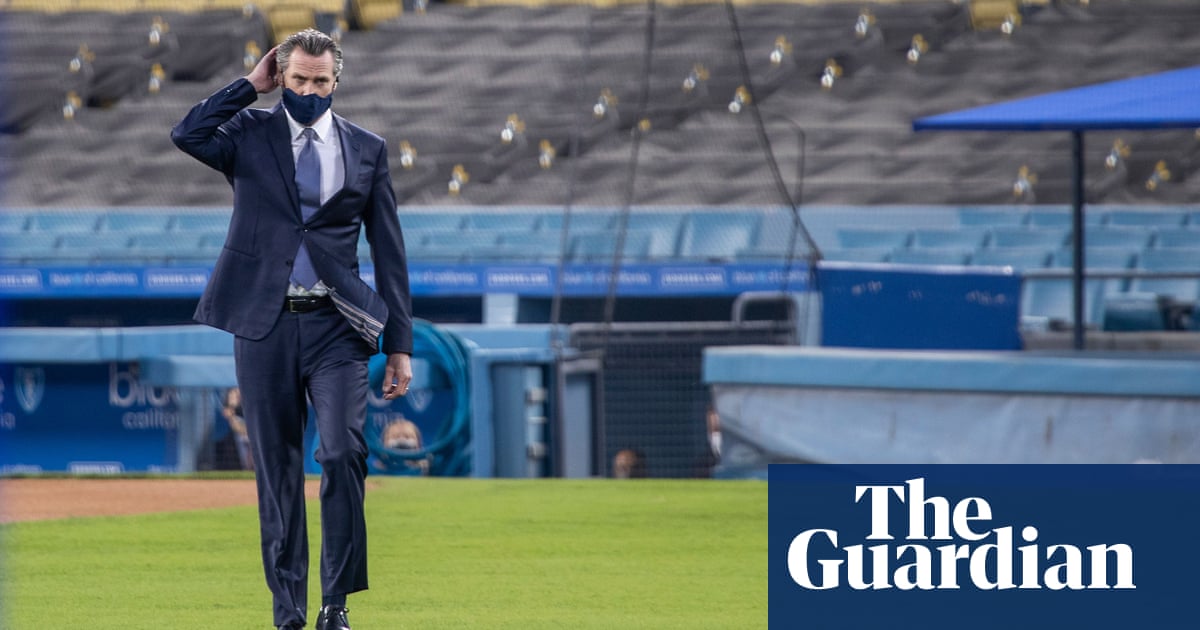 Nearly a year after Gavin Newsom became the first American governor to issue a statewide stay-at-home order to combat the coronavirus, the California leader delivered his “state of the state” address from an empty Dodger Stadium in Los Angeles.

“Let’s allow ourselves to dream of brighter days ahead,” Newsom said on Tuesday.

It was a pep talk for the state – and for himself.

America’s most populous state is coming out of its most deadly phase of the pandemic, having lost more than 56,000 to Covid-19. Black and Latino communities face the brunt of the crisis. Businesses have struggled to survive lockdown restrictions. Many public schools have been closed since last March. And the state’s initially clumsy vaccine rollout has only recently picked up speed.

Capitalizing on the growing frustrations of economically devastated, pandemic-fatigued residents, Newsom’s fiercest critics have mounted a recall campaign and are prepared to submit, by Wednesday, the requisite 1.5m voter signatures to trigger the vote. The campaign’s organizers say they have already found more than enough backers, and they have collected hefty checks from business developers, venture capitalists and Trump loyalists.

State officials have yet to verify the petition signatures, but political analysts say that a gubernatorial recall election later this year appears more or less inevitable. “There’s going to be a recall election – simply put,” said Mindy Romero, the founder of the Center for Inclusive Democracy, a nonpartisan research organization.

“What’s more complicated,” she said, “are the reasons why.”

In California – one of 19 states that allow voters to remove elected officials before their terms expire – calling a recall election is fairly easy. The only requirement is to collect a number of signatures equal to 12% of the voters in the last election for the office.

“So to get this on the ballot is not at all an impossible feat,” said Joshua Spivak, a senior fellow at the Hugh L Carey Institute for Government Reform at Wagner College and expert on recalls. “To opponents of the governor, it’s really appealing as something worth trying.”

In 2020 alone, 11 recalls of various officials went to a vote, and eight officials were removed from office as a result, Spivak said. Recall petitions have been launched against every California governor in the last 61 years – though they are almost never successful. Gray Davis, the only California governor who has ever been recalled, was in a far more precarious position in 2003, at the heels of an electricity crisis, facing a $38bn budget deficit. He lost the recall to Arnold Schwarzenegger, who entered the race with a higher profile than any of the Republicans set to face off against Newsom this year.

Republicans had already tried and failed five times to get Newsom recalled, when their sixth try, led by the retired sheriff’s deputy Orrin Heatlie, began to gain momentum last year. Amid the coronavirus pandemic, a judge gave Heatlie and his supporters more time to collect signatures. As Newsom enacted restrictions last winter in an attempt to quell the deadliest wave of the pandemic, recallers were able to rally an anti-lockdown base and win over other Californians struggling to cope with the pandemic’s protracted, devastating economic toll. It didn’t help Newsom’s case that around the same time, the governor met up with a dozen of his closest friends and lobbyists for a lavish dinner at Napa’s French Laundry restaurant.

“Anytime an elected official is serving under a crisis, it is a precarious situation,” said Romero. “Faced with the pandemic, it would be shocking if the governor and elected officials didn’t receive some negative reaction.”

Amid the state’s chaotic vaccine rollout, Newsom’s poll numbers plummeted. A third of voters polled by the University of California, Berkeley, Institute of Governmental Studies in late January rated the governor’s overall handling of the pandemic well, while 44% said he was doing badly.

But two months have passed since the last round of major polls, and Democratic strategists are hopeful. “I think that as we start to reopen schools, as we start to get people back to work, as we get more people vaccinated, I think voters are going to take note,” said Drexel Heard, a Democratic political strategist based in Los Angeles. “By next month some baseball stadiums might be reopened,” he added – which could take the steam out a recall effort fueled by anti-lockdown fervor.

Romero said she was skeptical that legitimate frustrations with the governor over the state’s policies, school and business closures, its disastrous inefficiency in doling out unemployment aid, and its slapdash vaccine rollout would rile up Democrats and moderate Republicans enough to vote him out of office, just one year before his term expires.

More than a serious effort to unseat Newsom, the recall effort is probably more of a strategy to rally Republican voters, boost Republican candidates, and raise funds. “The recall can be a rallying cry, in California and across the county,” Romero said. “For the Republican candidates running against the governor, it can raise their national profiles.”

In a recall election, voters are asked two questions: first, whether they want to recall Newsom, and then, who should replace him? With Democrats highly unlikely to run a candidate in the election, liberal and moderate voters who are frustrated with Newsom would be left to choose among Republicans they might agree with even less.

The top contenders vying to replace Newsom include the former San Diego mayor Kevin Faulconer; the conservative activist Mike Cernovich; and John Cox, who lost to Newsom in 2018 by 23 points, the largest margin in a California governor’s race since the 1950s.

Recall campaigners said their effort has broad appeal. More than a third of signatories on the recall petition identify as Democrats or independents, or declined to state their party affiliation, said Randy Economy, a conservative broadcaster and ex-Trump campaign staffer with the Newsom recall campaign. “We have an angry electorate right now” and the campaign is leveraging their frustration, he told the Guardian.

But in a deep blue state where less than a quarter of registered voters are Republicans, recall proponents’ far-right, anti-immigrant, anti-housing for homeless people, anti-sex education and anti-gun control platform is likely to alienate most voters, political experts said. A Wednesday evening virtual town hall featured a presentation by the conservative-aligned Election Integrity Project California, where speakers listed spurious allegations of voter fraud in line with Donald Trump and his supporters.

“In order to gain relevance in California, the Republicans need to renounce Trump, they need to renounce white supremacy,” said Mike Madrid, a former state Republican party political director who co-founded the conservative Lincoln Project. “The hyperpartisan recall shows that instead, they’re happy to continue swirling down the drain.”

Newsom has largely avoided public discussion of the recall effort. “The Republican recall is a partisan attempt to install a Trump supporter as governor,” said Dan Newman, a Newsom political strategist.

The governor referenced the recall effort only obliquely in his Dodger Stadium address. “I just want you to know, we’re not going to change course, just because of a few naysayers and doomsdayers.” he said.

MIAMI--(BUSINESS WIRE)--Intelli Smart Homes, the leading smart home technology company, has been recognized as one of America’s fastest-growing … END_OF_DOCUMENT_TOKEN_TO_BE_REPLACED

Customers outside a Walmart store in Torrance, California, US, on Sunday, May 15, 2022. Walmart Inc. is scheduled to release earnings figures on May … END_OF_DOCUMENT_TOKEN_TO_BE_REPLACED

The past few years have been brutal on homebuyers' budgets. Would-be buyers have been priced out of some of the most desirable neighborhoods thanks to … END_OF_DOCUMENT_TOKEN_TO_BE_REPLACED