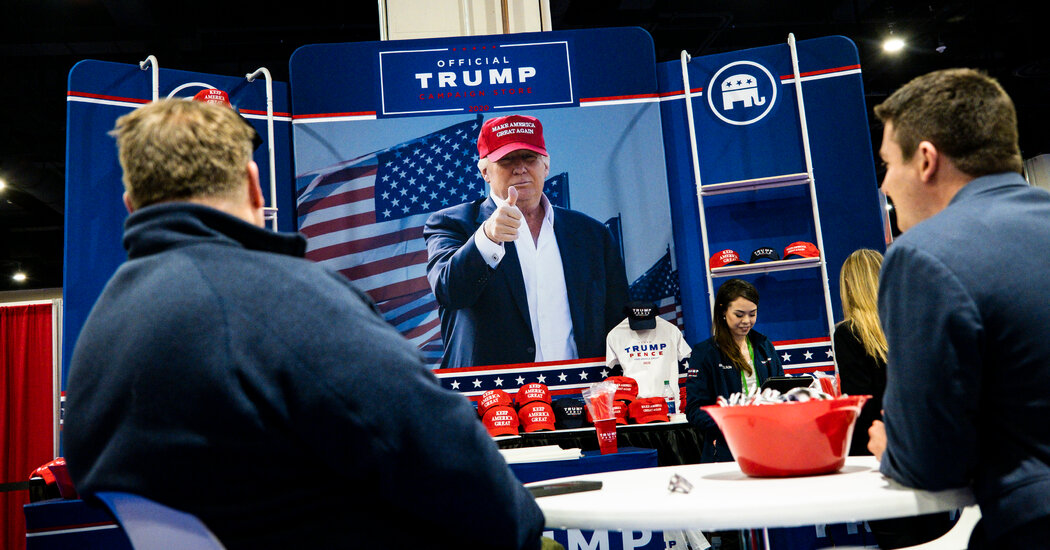 Day 1 of the Conservative Political Action Conference will include speeches from Senators Tom Cotton, Ted Cruz, Rick Scott and others. Here’s what to expect.

After a month of operating uncharacteristically behind the scenes from Mar-a-Lago, Donald J. Trump will make the debut appearance of his post-presidency at the Conservative Political Action Conference on Sunday, and much as in the incipient 2024 presidential primary race, he is expected to overshadow the other Republican politicians who precede him.

Gov. Ron DeSantis of Florida, whose state is playing host to CPAC, will kick off the conference on Friday and set the tone as the first in a parade of potential 2024 candidates to address the activist crowd. Among the others: Senators Ted Cruz of Texas, Tom Cotton of Arkansas, Josh Hawley of Missouri and Rick Scott of Florida, along with former Secretary of State Mike Pompeo and Gov. Kristi Noem of South Dakota. Here’s what to watch for this weekend.

Republicans looking to stand out

For the potential presidential hopefuls, the annual CPAC gathering represents a first chance to test their political messages and their appeal in a post-Trump era. It will also be a balancing act to find applause lines that are not simply pledges of fealty to Mr. Trump, the party’s most popular politician, or embracing of Mr. Trump’s baseless conspiracy theories that the 2020 election was stolen. Multiple panels over the weekend are slated to discuss election issues, with intentionally inflammatory titles like “Other Culprits: Why Judges & Media Refused to Look at the Evidence.”

Though the Republican Party entered 2021 with gains in the House, it lost the Senate and the White House, and the party is facing deep questions about what it stands for after Mr. Trump, whose demands for loyalty came to define — and overturn — much of the party’s orthodoxies in the last five years.

“In election years past, CPAC used to be the first official cattle call of the next presidential cycle, and like everything in 2021, that has been upended by the continued presence of Donald Trump on the national stage,” said Colin Reed, a veteran Republican strategist. “As long as he is hanging around or threatening or teasing the idea of another run, there is simply no oxygen” for potential presidential candidates.

The internal party divisions were laid bare by an awkward moment at the U.S. Capitol earlier in the week. Representative Kevin McCarthy, the House minority leader, said that Mr. Trump “should” speak at CPAC as a party leader. Moments later, Representative Liz Cheney, who is the No. 3 House Republican and who backed Mr. Trump’s impeachment last month, added that “I don’t think he should be playing a role in the future of the party.”

Mr. McCarthy quickly adjourned the news conference. “On that high note, thank you all very much,” he said.

Mr. Trump has said that he will try to unseat Ms. Cheney in her 2022 primary, along with other Republicans who voted to impeach him after the riot at the Capitol.

Despite the party’s internal tumult, Republicans remain razor-edge close to taking back control of at least one chamber of Congress in 2022. The Senate is equally divided, and the House Democratic majority is fewer than a dozen seats. Many Republican strategists are hoping to unite the party’s disparate factions in opposition to President Biden’s agenda and what they expect will be Democratic overreach.

Mr. Scott, who is the chairman of the National Republican Senatorial Committee and will speak on Friday, released a video this week declaring that the “Republican civil war is canceled” and rallying opposition to Mr. Biden.

But that was more easily said than done, coming days after Mr. Trump had slashed the Senate Republican leader, Mitch McConnell of Kentucky, as “a dour, sullen, and unsmiling political hack.”

“If Republican Senators are going to stay with him, they will not win again,” Mr. Trump said in a statement. (Mr. McConnell, who said in an interview on Fox News late on Thursday that he would support Mr. Trump if he were the Republican nominee, will not appear at CPAC.)

Trump returns to the spotlight

For Mr. Trump, who is slated to be the final major speaker of the conference on Sunday afternoon, returning to CPAC is something of a homecoming. His speech there a decade ago, in 2011, was an early breakout point in his political career and sketched out some of the themes that would define his two runs for president, down to his closing line (“Our country will be great again”).

One former senior Trump administration official is among the slated speakers and potential 2024 candidates: Mr. Pompeo, a former congressman and Central Intelligence Agency director. As Axios first reported, Mr. Pompeo recently set up a limited liability corporation called Kansas CNQ — CNQ stands for “Courage Never Quits,” a reference to his West Point class — and has been maintaining a public profile.

One Republican who could figure significantly in the party’s future but will not be at CPAC is former Vice President Mike Pence. For four years, Mr. Pence played the loyal sidekick to Mr. Trump, but his refusal to support the former president’s attempts to overturn the 2020 election earned the ire of Mr. Trump and many of his supporters, including some who rioted at the Capitol.

Matt Schlapp, the chairman of the American Conservative Union, which organizes CPAC, called it a “mistake” for Mr. Pence to skip the event. Nikki Haley, the former ambassador to the United Nations, is also skipping the event.

Senator Mitt Romney of Utah, the 2012 Republican nominee for president and a fierce critic of Mr. Trump, predicted this week that if Mr. Trump runs in 2024, “I’m pretty sure he will win the nomination.”

It was not so long ago that CPAC was seen as a pro-Romney crowd. Mr. Romney won the CPAC presidential straw polls four times (2007, 2008, 2009 and 2012). But today he acknowledged that in opposing Mr. Trump, he represents a “tiny wing of the Republican Party.”

When you think of Oscar winner Sandra Bullock, the first words that come to mind are probably not "organic farmer."But that's one of the many things … END_OF_DOCUMENT_TOKEN_TO_BE_REPLACED