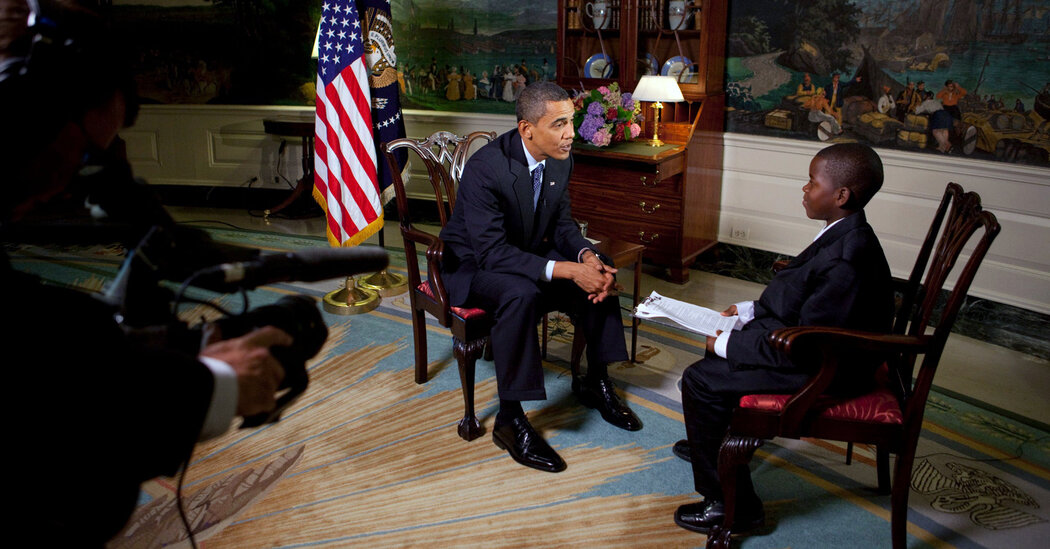 Damon Weaver, who at age 11 became one of the youngest people to interview a sitting president and later gained attention for scoring other high-profile interviews with celebrities such as Dwyane Wade and Oprah Winfrey, died on May 1. He was 23.

The death was confirmed by Candace Hardy, Mr. Weaver’s sister. The cause was not made known.

Ms. Hardy told WPTV-TV in West Palm Beach, Fla., that her brother had texted her while she was at work that he was in the hospital. By the time she went to see him, he had already died, she said.

In 2009, Mr. Weaver, then 11, conducted a sit-down interview with President Barack Obama in the Diplomatic Room of the White House, questioning him on topics like the Obama administration’s efforts to improve education in lower-income areas such as Mr. Weaver’s hometown, Pahokee, Fla., and Mr. Obama’s basketball skills.

“You did a great job at this interview, so someone must be doing something right at that school,” Mr. Obama told Mr. Weaver after the 11-year-old extended an invitation to come visit him at Kathryn E. Cunningham/Canal Point Elementary School in South Florida.

“Everybody just couldn’t wait to be around him,” Ms. Hardy told WPTV. “Family gatherings, they were always fun just because of his presence.”

Information about Mr. Weaver’s survivors was not immediately available.

Mr. Weaver also covered Mr. Obama’s inauguration as the 44th president for his school’s television news program, interviewing inauguration attendees and celebrities including Ms. Winfrey and Samuel L. Jackson. In an interview with The Associated Press before heading to Washington, Mr. Weaver highlighted what he enjoyed most about being a reporter.

“I liked seeing people on TV, so I thought that I could do that job one day,” Mr. Weaver said. “I like being a reporter because you get to learn a lot of things, you get to meet nice people and you get to travel a lot.”

Mr. Weaver said that his favorite subjects in school at the time were reading and math and that he had goals of becoming a journalist one day and maybe even a football player, an astronaut or president.

“I’m very proud of him,” Regina Weaver, Mr. Weaver’s mother, told The A.P. “I never imagined that this project would go as far as it has gone.”

AUSTIN, Texas--(BUSINESS WIRE)--As the first multifamily management company to be recognized in the Public Relations and Marketing Excellence Awards, … END_OF_DOCUMENT_TOKEN_TO_BE_REPLACED

There have been whispers of cooling housing and rental prices in the San Francisco Bay Area, but that hasn't yet translated into practical, noticeable … END_OF_DOCUMENT_TOKEN_TO_BE_REPLACED

Cars pass in Independence Square at twilight in Kyiv, Ukraine, Monday, Oct. 31, 2022. Rolling ... [+] blackouts are increasing across Ukraine as the … END_OF_DOCUMENT_TOKEN_TO_BE_REPLACED