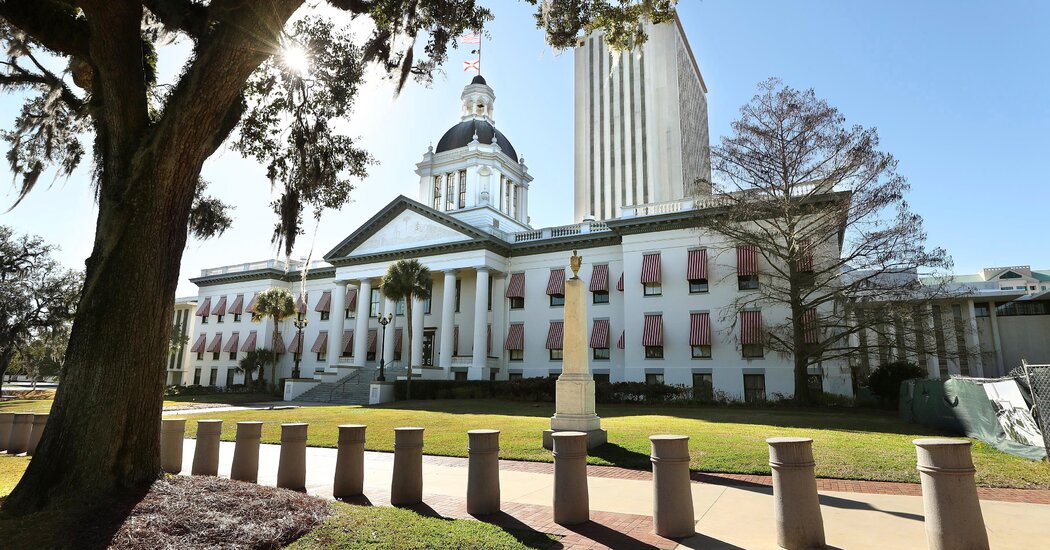 A former U.S. Army Airborne infantryman was convicted by a federal jury on Thursday of threatening to organize a violent confrontation with right-wing protesters at the Florida State Capitol in January, days after a mob of Trump supporters stormed the United States Capitol in Washington, prosecutors said.

The former infantryman, Daniel Alan Baker, 33, who once described himself as a “hard-core leftist,” was arrested by F.B.I. agents on Jan. 15 after he had issued a “call to arms” asking like-minded people to violently confront demonstrators in Tallahassee, Fla., the Justice Department said.

According to an F.B.I. affidavit, Mr. Baker was arrested the day after he uploaded a poster-style image as a comment on a Florida television station’s news article asking residents to protect the Capitol from “armed racist mobs with every caliber available” on Jan. 20, the day of President Biden’s inauguration. The poster added, “This is an armed coup and can only be stopped by an armed community!”

Mr. Baker also created a Facebook event called “Defend Tallahassee” on Jan. 12 in which he warned that “armed racist mobs” were planning to storm state capitols on Inauguration Day and vowed to “drive them out of Tallahassee with every caliber available,” the affidavit states.

No major protests or violence occurred at the Florida Capitol on Jan. 20.

Mr. Baker was convicted after a two-day trial on two counts of transmitting a communication in interstate commerce containing a threat to kidnap or injure another person, according to the Justice Department. He will face a maximum sentence of five years in prison, a $250,000 fine and three years of supervised release on each count when he is sentenced on Aug. 16.

“The free exercise of speech is central to our democracy,” Jason R. Coody, the acting U.S. attorney for the Northern District of Florida, said in a statement. “However, the defendant’s threats of armed violence to inhibit expression of political views different than his own are both unlawful and dangerous.”

Mr. Baker’s lawyer, Randolph P. Murrell, declined to comment on Thursday night. In a court document, Mr. Baker had argued that the threats he was accused of making were “the product of the heated political dialogue of the day” and were “equivocal, conditional, and fail to show an intent to immediately inflict injury.”

“Much of what Mr. Baker has posted amounts to a call for a citizen defense of the Florida Capitol not unlike the citizen militia’s efforts at defending Harpers Ferry when in the summer of 1859 an armed group led by John Brown commandeered the federal armory at Harpers Ferry,” the court document filed by Mr. Murrell stated. “Indeed, an effort by citizens to defend a state capitol hardly seems illegal.”

Prosecutors said that evidence presented at trial showed that Mr. Baker’s communications were “true threats.” The evidence included Mr. Baker’s foreign and domestic military training, his experience with firearms and explosives, and his social media posts that threatened violence and calls to war against those of different ideologies, prosecutors said.

In a Vice documentary, Mr. Baker was shown fighting ISIS or Turkish militants, according to the affidavit, which said Mr. Baker returned to the United States from the Middle East in April 2019.

It’s a property that offers a unique open floor plan—plus a hot tub with a view.“It was a Methodist church located in a historic little area of St. … END_OF_DOCUMENT_TOKEN_TO_BE_REPLACED