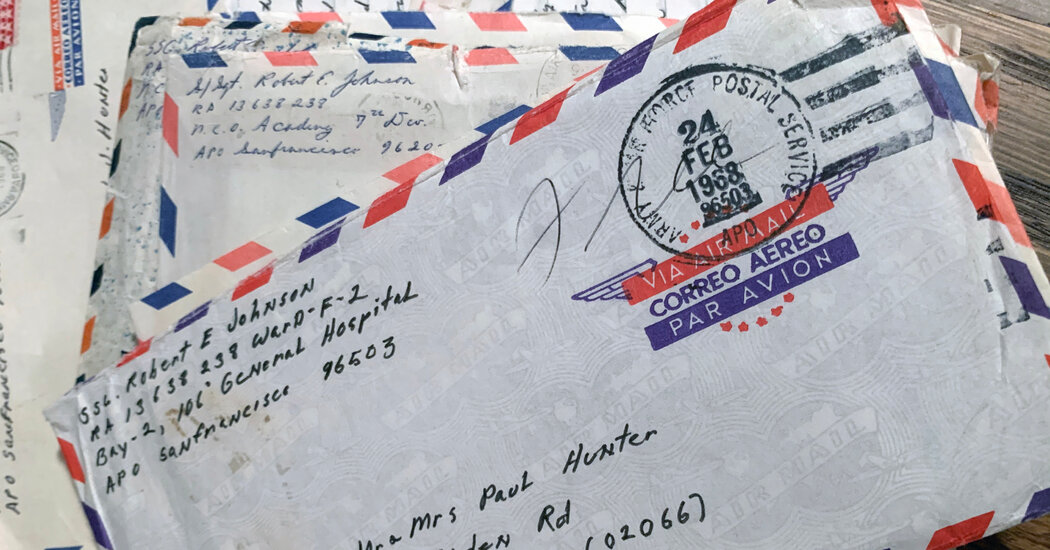 In 1966, Joan Hunter of Scituate, Mass., sat down with her husband and three children to watch a special news report about the Vietnam War.

As the rest of the family went to bed, Ms. Hunter remained in front of the television, transfixed as a reporter interviewed members of the First Cavalry Division.

One piece of footage stuck with her — mail call. The disappointed faces of soldiers who had not received letters from home so moved Ms. Hunter, then 30, that she decided she would write letters to them on her IBM typewriter.

It was the start of what she called Operation Morale Booster, a one-woman campaign that eventually enlisted dozens of students from her children’s elementary school and the high school where her husband taught. They exchanged thousands of letters with soldiers overseas.

a book, “77 Letters,” published in October. The letters will be read by two actors on the podcast “Behind the Lines” on March 30, one day after National Vietnam War Veterans Day.

“Her kids were too young to serve; her husband was too old to serve,” said Ms. Hunter, 54, who was born in 1967, one year after her mother began writing Mr. Johnson. “She just felt like she needed to do something.”

The first of Joan Hunter’s letters — addressed “Dear G.I. in Vietnam” — were delivered to troops around February 1966.

Mr. Johnson, then 24, was recovering from a bullet wound to the shoulder when he read the letter, in which Ms. Hunter described the “pretty seacoast” town of Scituate; her three children (a girl, 6, and two boys, 5 and 4); and her husband, a teacher and coach at Boston College High School.

“It was a big boost — you can’t imagine,” Mr. Johnson said in the interview. “A lot of people think of war as being exciting. War is one of the most boring things you can experience.”

Between bouts of fighting and bloodshed, there were hours of waiting, sitting around with fellow soldiers, whose stories Mr. Johnson had heard over and over again.

He immediately wrote her back, describing his commitment to ridding the world of communism and his hopes that he might make sergeant.

“I would sincerely like to become your pen pal,” he wrote.

Soon, they were both writing regularly, addressing each other as “Bob” and “Joan.”

They wrote about their sadness over how the war was dividing the country, the chilly treatment received by many returning soldiers and the racial tensions that had exploded into riots across the country. Mr. Johnson described how he had almost married a woman he met when he was stationed in Germany, just to prove that a white woman and a Black man could be happy together.

Ms. Hunter replied bluntly: “Sadly, I think that if you had married that German girl you would not have found that you could live as well in the States as you had hoped.”

He wrote about the horror of watching napalm destroy the beautiful jungles of Vietnam, his waning trust in the political leaders who had sent young men like him to war and his own self-doubt.

“I know I am a coward deep within,” he wrote her in a June 1966 letter that described how scared he was to leave the Army as a Black man with little education and few job skills.

He added: “Do you want to know why I volunteered to come to Vietnam? I was thinking like a schoolboy. I wanted to come back home as a hero like they did after World War II. I wanted to show my country that I was worthy of being a respected citizen.”

Ms. Hunter and Mr. Johnson met in person only once: in October 1968, when he was home on leave. He traveled to Scituate for the weekend and stayed with Ms. Hunter and her husband, Paul, exploring the South Shore of Massachusetts and visiting Plimoth Plantation.

During his service, he met a Korean woman, Pok Son, and they married. The couple adopted a girl, Melody, from Korea, and the family came to the United States in 1970.

Mr. Johnson became a Green Beret and led military operation training in Central and South America. He retired from the Army in 1978 but continued to lead training activities in Egypt and Saudi Arabia.

He struggled with post-traumatic stress disorder and drank heavily, according to Melody Johnson, who recalled how frightened she had been watching him get drunk in their backyard. He would often mutter in his sleep, she said, and she could hear him talking to his superiors or fellow soldiers.

After the war, Mr. Johnson and Ms. Hunter kept in touch, writing each other Christmas cards. But after 15 years, even those holiday greetings stopped.

By 2018, Joan Hunter’s dementia had worsened, and her daughter dug up the letters, hoping that they might revive lost memories. When they didn’t, she decided the public might want to read them and spent a year trying to persuade Mr. Johnson to let her interview him for her book.

She shared the letters with Ms. Johnson, who was struck by how open and vulnerable her father had been.

Ms. Johnson recalled one letter in which he described his fear that he was beginning to depend too much on the free beer that the Army made available to soldiers. The letters, she said, helped her forgive her father.

“It really gave me a lot of perspective,” Ms. Johnson, 55, said. “A lot of what he shared with Joan, he never spoke of to anyone else.”

They are writing to each other again, though now it is their daughters who are composing the letters.

“It blew my mind,” he said. “Who would want to sit down and read a bunch of personal letters about the G.I.s of Vietnam?”

Whether you optimistically hope that mortgage rates will decline or are resigned that rates will stay elevated above the historic lows of 2021, you … END_OF_DOCUMENT_TOKEN_TO_BE_REPLACED