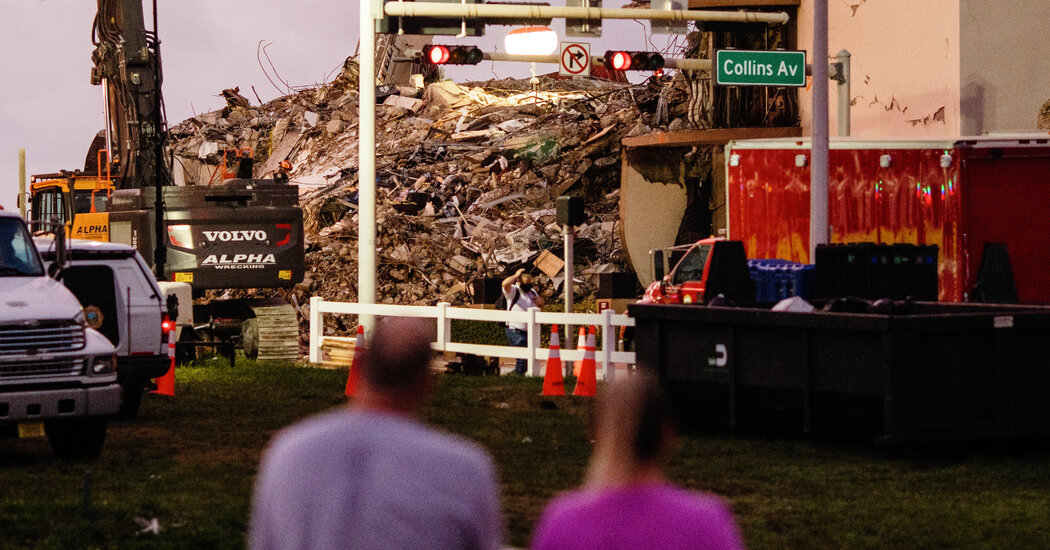 The death toll from the collapse of the Champlain Towers South condominium building in Surfside, Fla., has increased to nine, officials said Sunday morning, as they announced the recovery of four additional victims as well as human remains.

“My deepest condolences to the families, the friends, the communities of those who’ve lost their lives, and my prayers with the families and the whole community as they mourn this tragic loss,” Mayor Daniella Levine Cava said at a news conference.

The mayor said that more bodies and remains were recovered when rescuers began to dig a trench into the pile of debris overnight. She said the trench, which will be 125 feet long, 20 feet wide and 40 feet deep, will serve as a critical way to assist in the operation.

As of Sunday morning, there were still more than 150 people unaccounted for. Of the nine people confirmed dead, one died in the hospital and eight were recovered at the scene of the collapse. Officials continued to say Sunday morning that they remain hopeful in their search for survivors.

identified four of the victims killed in the collapse: Antonio Lozano, 83, and Gladys Lozano, 79, of Apartment 903; Manuel LaFont, 54, of Apartment 801; and Stacie Fang, 54, of Apartment 1002. The bodies of Ms. Fang and Mr. Lozano were recovered on Thursday; Ms. Lozano and Mr. LaFont on Friday.

Just hours before Mr. LaFont was confirmed as one of the dead on Saturday, his ex-wife, Adriana LaFont, expressed hope to reporters outside of the family reunification center at the Grand Beach Hotel that he could make it out alive from the rubble. Mr. LaFont, a businessman who worked with Latin American companies, leaves behind a 10-year-old son and a 13-year-old daughter.

The search has been painstakingly slow, hampered at times by smoke from a fire beneath the rubble.

Helene Thiesen was one of 22 Inuiit children separated from their families in Greenland 70 years ago. Editor’s note: This story is part of CNN’s … END_OF_DOCUMENT_TOKEN_TO_BE_REPLACED