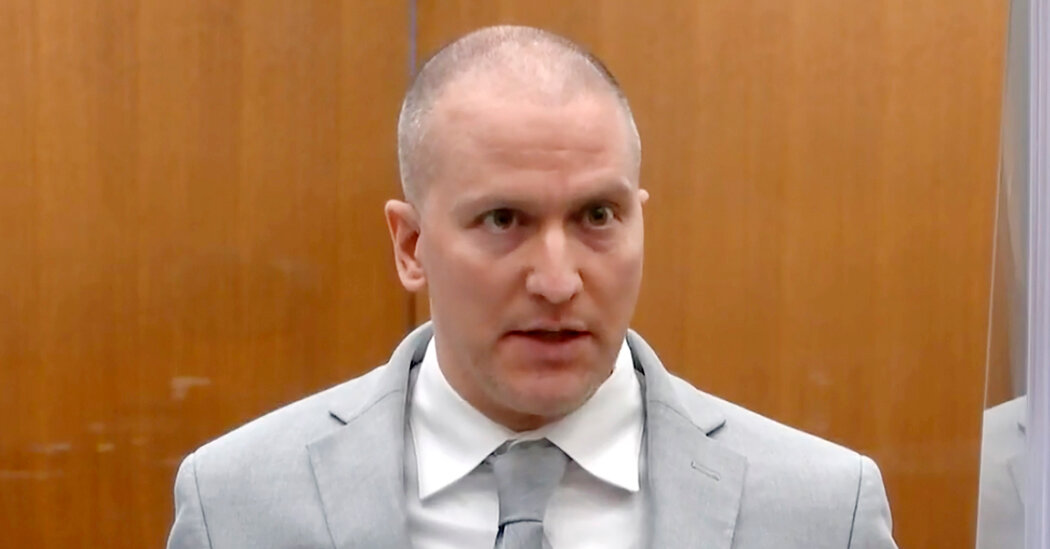 MINNEAPOLIS — A federal court on Monday set a hearing for Derek Chauvin to change his plea, signaling that the former Minneapolis police officer who was convicted of murdering George Floyd intended to plead guilty to charges that he also deprived Mr. Floyd of his civil rights.

Mr. Chauvin, 45, who recently began serving a prison sentence of more than 22 years for murder, has been facing charges that he violated Mr. Floyd’s constitutional rights when he knelt on Mr. Floyd’s neck for nine and a half minutes as he arrested him in May 2020.

The killing of Mr. Floyd, a 46-year-old Black man, by Mr. Chauvin, a white officer, led to the largest protest movement in a generation. The federal indictment was a rare instance of the Justice Department pursuing a criminal case against a police officer, particularly after Mr. Chauvin had already been convicted of state crimes.

The two federal charges against Mr. Chauvin allege that he violated Mr. Floyd’s rights by using unreasonable force and by acting with “deliberate indifference” when he pinned Mr. Floyd to the ground while he cried for help and told officers he could not breathe.

pleaded not guilty in September. His lawyer did not return emails seeking comment, and the Justice Department declined to comment.

It was not immediately clear what prompted the change of plea hearing, but many legal experts have expected Mr. Chauvin to eventually plead guilty to the federal charges.

The case against him is strong, they said, and a plea deal would most likely bring a lighter sentence than a conviction after a trial, which could send him to prison for life. Pleading guilty could also allow him to serve his sentence in a federal prison, which could keep him from crossing paths with inmates in state prison whom he might have helped send there.

When prosecutors brought the federal charges against Mr. Chauvin in May, they also charged him with two additional federal crimes, saying that in 2017 he had held his knee on a teenager’s neck and hit him with a flashlight. Mr. Chauvin has pleaded not guilty to those charges, and no change of plea hearing has been set in that case.

has been in solitary confinement in Minnesota’s only maximum security state prison since April 20.

A guilty plea by Mr. Chauvin could help the city find some closure following the killing of Mr. Floyd, which led to a wave of protest and a push for police reform, as well as the destruction of hundreds of businesses and homes during the ensuing unrest. It also spurred a ballot initiative over replacing the city’s Police Department that voters rejected last month.

Nekima Levy Armstrong, a civil rights lawyer and activist in Minneapolis, said a guilty plea could also spare the city the trauma of another trial.

“It was excruciating and very painful watching the first trial and having to watch the video evidence, over and over again, of George Floyd getting killed,” she said on Monday, adding that she hoped Mr. Chauvin would publicly apologize at the hearing.

The three other Minneapolis officers who were at the scene — Thomas Lane, J. Alexander Kueng and Tou Thao — are scheduled to go on trial in March on charges that they aided and abetted both second-degree murder and second-degree manslaughter.

Some of the officers forced Mr. Floyd to the pavement after they arrived at a convenience store where a clerk had called 911 to report that Mr. Floyd used a fake $20 bill to buy cigarettes. After Mr. Floyd pushed his way out of the back of a police car, Mr. Chauvin knelt on his neck as a small group of onlookers watched and yelled for him to stop.

Mr. Floyd was a grandfather and former rapper under the name Big Floyd who had worked as a security guard at a nightclub before losing his job when the club closed at the onset of the Covid-19 pandemic.

“Due to some additional legal matters at hand, I’m not able to give a full formal statement at this time,” Mr. Chauvin said in court. “But, very briefly, I want to give my condolences to the Floyd family.”

“There’s going to be some other information in the future that would be of interest,” he added, “and I hope things will give you some peace of mind.”

AUSTIN, Texas--(BUSINESS WIRE)--As the first multifamily management company to be recognized in the Public Relations and Marketing Excellence Awards, … END_OF_DOCUMENT_TOKEN_TO_BE_REPLACED

There have been whispers of cooling housing and rental prices in the San Francisco Bay Area, but that hasn't yet translated into practical, noticeable … END_OF_DOCUMENT_TOKEN_TO_BE_REPLACED

Cars pass in Independence Square at twilight in Kyiv, Ukraine, Monday, Oct. 31, 2022. Rolling ... [+] blackouts are increasing across Ukraine as the … END_OF_DOCUMENT_TOKEN_TO_BE_REPLACED