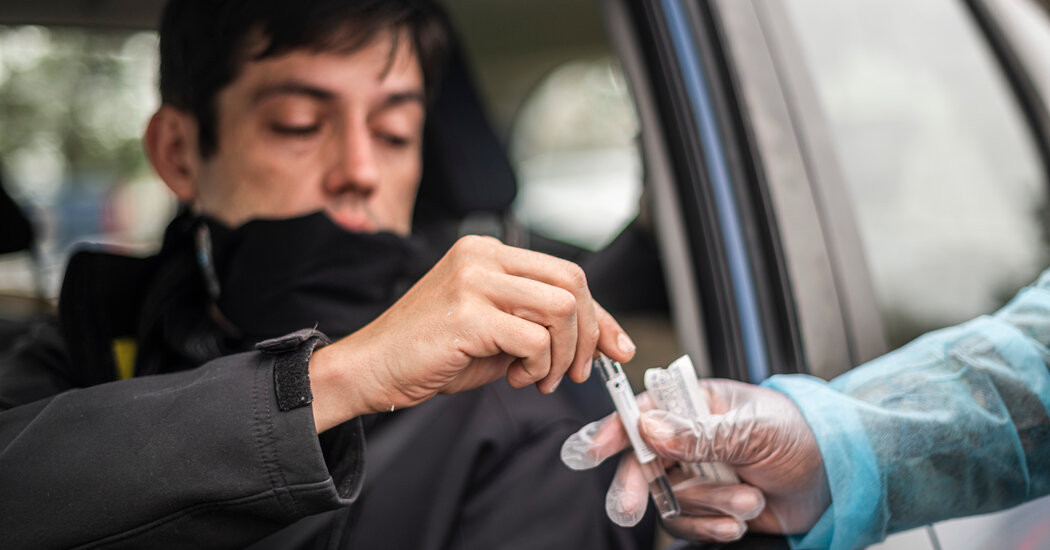 CHICAGO — With infection rates mounting, the Omicron variant has ushered in a new and disorienting phase of the pandemic, leaving Americans frustrated and dismayed that the basic elements they thought they understood about the coronavirus are shifting faster than ever.

There were reasons for heightened concern and reasons for consolation: Omicron is more transmissible than previous variants, yet it appears to cause milder symptoms in many people. Hospitalizations have soared to new highs in some states, but “incidental patients” — people who test positive for Covid-19 after being admitted for another reason — make up close to half of their cases in some hospitals.

Public health officials, in response to the new variant, have halved the recommended isolation period for people with positive tests to five days from 10 days, while also suggesting people upgrade their masks from cloth to medical-grade when possible.

President Biden’s own former transition team has called on the president to adopt an entirely new domestic pandemic strategy geared to the “new normal” of living with the virus indefinitely, not to wiping it out.

And Americans, confronted with these new sets of facts, warnings and advisories, have responded with a mix of confusion, vigilance and indifference. Left mainly to navigate it all on their own, they must sort through an array of uncertain risks — ride a bus? visit friends? eat inside? — hour by hour.

India, bracing for a tidal wave of infections with only half its population vaccinated, has set up makeshift Covid wards in convention halls. In Argentina recently, the test positivity rate rose to a staggering 30 percent.

But with signs that the wave of Omicron in South Africa is receding, without bringing a huge new surge of deaths, many countries have moved to a strategy of living with the virus, opting to keep businesses and schools open rather than risk the economic havoc of more lockdowns.

Health officials in the United States, weary from two years of repeating similar pleas to the public, have tried to emphasize that the Omicron variant is like no other phase of the pandemic.

Daily case reports have roughly quintupled over the last month as Omicron has taken hold. About 650,000 new cases are being identified each day, more than twice as many as at last winter’s peak — a number that is certainly an undercount, since it does not include many results from at-home antigen tests.

say, a smaller proportion of Covid patients are landing in intensive care units or requiring mechanical ventilation, but the sheer number of patients is raising alarms.

Deaths, which are a lagging indicator, have not yet increased as significantly. About 1,500 deaths from Covid-19 are being announced every day in the United States. It could be weeks, officials said, before they will know whether the Omicron variant will result in another large wave of deaths in the United States, where more than 830,000 people have died from the coronavirus.

Andrew Noymer, a public health professor at the University of California, Irvine, said that the Omicron variant has been “legitimately complicated” for many Americans to comprehend, since it clearly differs from previous variants.

“Omicron is milder than Delta, but it’s more transmissible,” he said. “It’s changing two things at once.”

Shifting advice on isolation and quarantines from the Centers for Disease Control and Prevention has also left Americans with questions about the seriousness of the variant. Many employers, acting on guidance from public health officials, have encouraged sick workers to return to their jobs after only five days, even without a test showing that they are negative for the virus.

“The confusion is compounded,” said Dr. Gill Wright, the city health director in Nashville. “People are saying, this is supposed to get really bad, but we can go back to work quicker?”

In rural Michigan, people with coronavirus symptoms have arrived at hospitals in recent weeks repeating the conventional wisdom that once you have had Covid, you are unlikely to contract it again quickly.

“A lot of them say, ‘It can’t be Covid, I just had it a few months ago,’” said Dr. Mark Hamed, an emergency room physician in Sandusky, Mich. “Lo and behold, they test positive.”

Roughly 62 percent of Americans are fully vaccinated, a number that has barely budged in recent weeks. Even fully vaccinated and boosted individuals have become infected with the Omicron variant, though health officials say that their infections appear less severe than in the unvaccinated.

Across the country, record numbers of public employees have been off the job as a result of surging coronavirus infections, leaving officials scrambling to reassure residents that if they call 911, someone will show up — if a little later than normal.

In Dallas, 204 of the roughly 2,100 employees of the city’s fire and rescue department were in quarantine on Thursday because of positive Covid-19 tests — the most since the beginning of the pandemic, according to Jason Evans, the department’s spokesman. He said that approximately one-quarter of the department’s total positive tests since March 2020 were from the last two weeks.

Los Angeles city officials said at a news conference on Thursday that almost 300 firefighters were off duty because of the virus, the most the department had seen at any one time. Jeff Cretan, a spokesman for Mayor London Breed of San Francisco, said that 140 employees of the fire department and 188 employees of the city police department had tested positive or were out because of quarantine protocols; so were 110 workers at the city’s transit agency.

Schools and colleges were facing the uncertainty of whether to conduct classes in person or virtually, sometimes while balancing competing arguments from parents, teachers and students.

In Chicago last week, the powerful teachers union and Mayor Lori Lightfoot clashed over coronavirus safety and testing in a dispute that has closed schools for several days in the nation’s third-largest school district.

At Rhodes College, a small liberal arts school in Memphis, officials announced over the holiday break that the start of in-person classes was being delayed two weeks — a disappointment for students exasperated with online classes and eager for the kind of college experience they had hoped for.

“Every semester, it feels like we’re almost back to normal and then it gets revoked one more time,” said John Howell, a senior political economy and philosophy major starting his final semester. “It feels like every routine is going to be broken and you should just expect that.”

Bishop James Dixon, the senior pastor at the Community of Faith Church in Houston, said that he and his fellow church leaders have found themselves struggling to strike the right balance as Omicron spreads.

“No one has a set answer,” he said. “It’s trial and error. It’s trepidatious. And we’re supposed to be people of faith and make a decision and take a direction.”

Mr. Dixon said the virus had caused a scare among many congregants because they know so many people now who have gotten it.

AUSTIN, Texas--(BUSINESS WIRE)--As the first multifamily management company to be recognized in the Public Relations and Marketing Excellence Awards, … END_OF_DOCUMENT_TOKEN_TO_BE_REPLACED

There have been whispers of cooling housing and rental prices in the San Francisco Bay Area, but that hasn't yet translated into practical, noticeable … END_OF_DOCUMENT_TOKEN_TO_BE_REPLACED

Cars pass in Independence Square at twilight in Kyiv, Ukraine, Monday, Oct. 31, 2022. Rolling ... [+] blackouts are increasing across Ukraine as the … END_OF_DOCUMENT_TOKEN_TO_BE_REPLACED