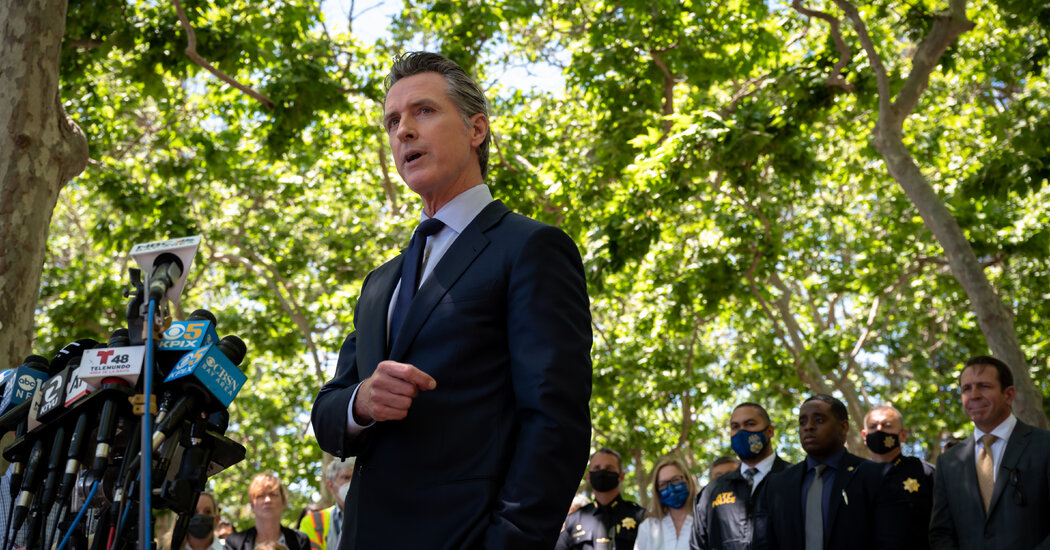 The coronavirus pandemic is rapidly receding in California, but for Gov. Gavin Newsom, at least one side effect has lingered: the Republican-led push to relieve him of his job.

How a Democratic star in the bluest of blue states could have ended up confronting a recall remains one of the more remarkable mysteries of the moment. In a perfect storm of partisan rage and pandemic upheaval, the effort to oust Newsom has become only the second recall attempt against a California governor to qualify for the ballot.

With only a few procedural steps remaining, a special election appears destined for autumn, or perhaps even sooner.

If you haven’t been paying attention to every detail — every reconsideration deadline, every Kodiak bear appearance, every Kruger mega-donation — we totally understand. So here’s the June edition of the California Recall Encyclopedia of 2021.

179 recall attempts have been made against state officeholders. Launching a recall effort in California is easy compared to most states, and every governor since 1960 has faced at least one.

But the vast majority of those efforts fizzle. California is enormous, with a population of nearly 40 million and at least five major media markets. The cost of campaigning statewide tends to thwart all but the most moneyed and determined critics.

Besides Newsom’s, only one other recall of a California governor, Gray Davis, has ever reached an election. Davis lost in 2003 to Arnold Schwarzenegger, who went on to face his own blitz of attempted recalls.

How do California recalls work?

Twelve percent of voters registered in the last gubernatorial election must sign a recall petition. They don’t need to give a reason, but they often do. The petition must include at least 1 percent of the registered voters in at least five counties. Proponents have 160 days to gather their signatures.

The signatures must then be examined and verified by the California secretary of state. If the petitions meet the threshold — 1,495,709 valid signatures in this case — voters who signed get 30 business days to change their minds. Newsom’s critics have turned in more than 1.7 million signatures, and voters have until June 8 to reconsider.

set an election between 60 and 80 days from the date of certification. If the proposed date is close enough to a regularly scheduled election, the deadline can be extended to 180 days.

Who can run in a recall?

Candidates to replace the governor must be U.S. citizens and registered to vote in California, and must pay a filing fee of about $4,000 or submit signatures from 7,000 supporters. They cannot be convicted of certain felonies, and they cannot be the governor up for recall. They have until 59 days before the election to file.

The ballot asks voters two questions: Should the governor be recalled? And if so, who should be the new governor? If the majority of voters say no to the first question, the second is moot. But if more than 50 percent vote yes, the candidate with the most votes becomes the next governor. The 2003 winner, Schwarzenegger, only had 48.6 percent of the vote.

55,588 signatures on the day of the dinner, had nearly half a million a month after Nov. 6.

The latest poll, done in early May by the Public Policy Institute of California, found that nearly six in 10 likely voters would vote to keep Newsom, and 90 percent of likely voters believe the worst of the pandemic is behind the state.

Supporters of the recall have raised approximately $4.6 million, and opponents have raised about $11.1 million, according to the nonprofit news site CalMatters. Thirty-seven candidates have officially announced their intention to challenge Newsom in the recall.

After nearly 3.8 million cases and more than 63,000 deaths, coronavirus infections are as low now as they were at the start of the pandemic, and 56 percent of Californians have received at least one vaccination shot. The state is running a record budget surplus as the stock market has soared and fewer white-collar Californians lost their jobs than expected. Reopening is scheduled for June 15.

Could this happen in other states?

Most states don’t allow recalls at the state level. If voters want a new governor, the argument goes, they can wait for the next election and vote. Only four gubernatorial recalls in U.S. history have even made it onto the ballot, according to the National Conference of State Legislatures: in 1921 in North Dakota, in 1988 in Arizona, in 2003 in California and in 2012 in Wisconsin.

according to Joshua Spivak, a senior fellow at Wagner College’s Hugh L. Carey Institute for Government Reform. Twelve recall campaigns focused explicitly on how the pandemic was handled. But only California’s got off the ground.

highly disgruntled employee who had angry outbursts on the radio system and had told his ex-wife he had wanted to beat up or kill his colleagues, The San Jose Mercury News reports.

The union movement that kicked off across the country more than a year ago has continued its momentum in 2022, with workers in warehouses, coffee … END_OF_DOCUMENT_TOKEN_TO_BE_REPLACED

Keep up! Reality TV star Kim Kardashian has splurged on a cliffside mansion in Malibu, CA, that was once owned by Cindy Crawford and Rande … END_OF_DOCUMENT_TOKEN_TO_BE_REPLACED