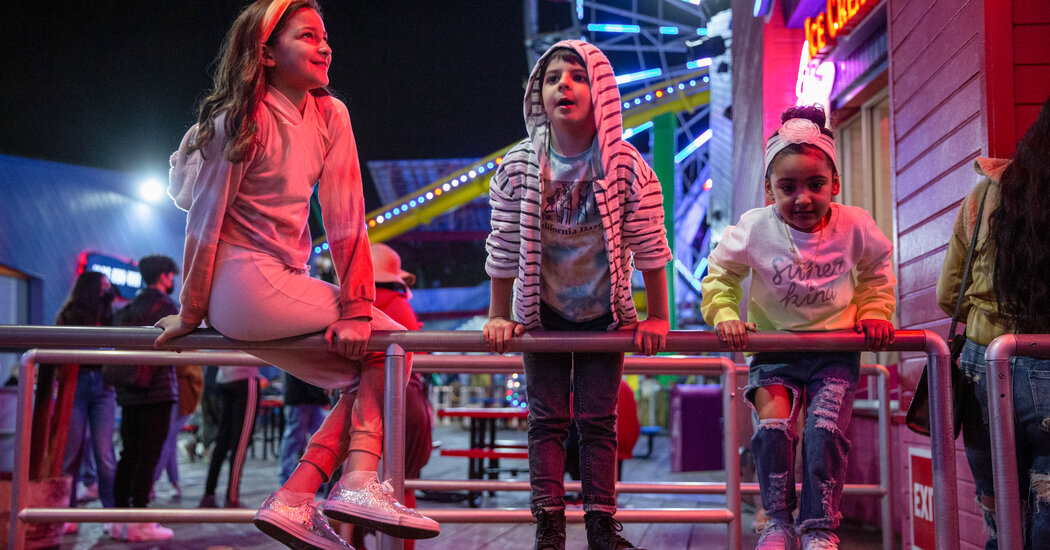 Life in California feels as if it’s finally returning to normal.

Hit a popular restaurant at the wrong time, and you’ll be waiting for an hour or more. Movie theaters are open indoors.

In Santa Monica, crowds of tourists are visiting the pier and the beaches. Yes, as The Los Angeles Times reported, the hordes of revelers led to worries about yet another spike in cases — although the county’s case levels are now low enough to lift even more restrictions.

[Here’s everything you need to know about California’s reopening process.]

In coming days, millions more Californians will be eligible for vaccines, and the Biden administration has assured Americans that plenty of doses for everyone are on the way.

nonpartisan firm Probolsky Research found that about 46 percent of voters would vote against recalling the governor if the election were held today. That’s compared with 40 percent who said that they would vote to recall him, and 14 percent who said they were unsure or preferred not to say.

“The recall would fail if the election was today,” Adam Probolsky, the firm’s president, said in a statement.

[Get caught up on the recall effort.]

Similarly, the Public Policy Institute of California, which regularly surveys residents across the state about lots of important issues, found in its March poll that 56 percent of likely voters would vote no on recalling Mr. Newsom, while 40 percent would vote yes.

state’s deadly winter surge, frustration with the state’s pandemic response grew. Momentum for a recall seemed to build, but a deadline to submit petitions was still months away.

Mark Baldassare, the institute’s president and chief executive, told me at the time that the January survey — which asked likely voters about whether they approved of the job Mr. Newsom was doing, but not whether they’d vote to recall him — suggested that there was enough support to lead to a recall election.

But whether the largely Republican disapproval of Mr. Newsom would translate into the votes to actually oust him from office was far less clear.

While his approval rating had dropped significantly from a peak in May 2020, it was still 52 percent among likely voters.

The effort to quickly vaccinate as many of California’s 40 million residents as possible, Mr. Baldassare said at the time, would play a large role in whether those numbers went up or down in coming months.

Californians said they’d been hit hard by the pandemic and many were less than optimistic about their economic and health prospects.

Now, here we are at the end of March, and Mr. Newsom himself has acknowledged that a recall election is probably going to happen.

But Mr. Baldassare told me on Tuesday that approval of Mr. Newsom’s job performance has largely held steady, while Californians said they had a much brighter outlook.

About three in four Californians said they believed the worst of the coronavirus pandemic is behind us — an increase of 16 percentage points from January. If that proves to be true, then Mr. Baldassare said the worst of the recall effort may also be in the rearview for Mr. Newsom.

“Memory is fading that things got off to a rough start,” Mr. Baldassare said. “People are feeling much more relieved about where things are with Covid and the vaccines.”

So if we’re on track to have a recall election, but one whose results are likely to reinforce the status quo, what is Mr. Baldassare, a longtime California pollster, watching?

“Who decides to run?” he said. “And will there be anyone that changes the dynamics in place right now?”

[Read a conversation with Gray Davis, the first and only California governor to be recalled.]

Already, the House speaker, Nancy Pelosi, has warned Democrats against throwing their names in the ring, lest they snatch votes from the governor.

An affordable center-chimney Colonial in Glastonbury, CT, is the oldest property to hit the market this week on Realtor.com®.Offered at a steep … END_OF_DOCUMENT_TOKEN_TO_BE_REPLACED

Nissan was one of the early pioneers of the electric car. The Leaf has now sold over 600,000 units worldwide since its launch in 2011 and is still … END_OF_DOCUMENT_TOKEN_TO_BE_REPLACED

RUDNE, Ukraine — Yurii Brukhal, an electrician by trade, didn’t have a very dangerous role when he volunteered for Ukraine’s territorial defense … END_OF_DOCUMENT_TOKEN_TO_BE_REPLACED