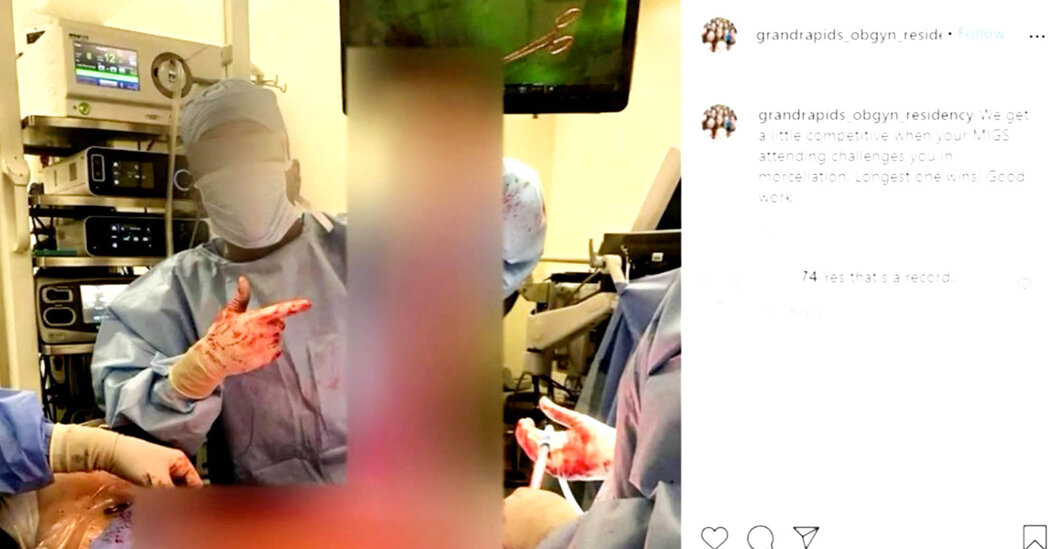 A health care network in Michigan said it had opened an investigation after some operating room doctors posted photos on social media last week showing themselves holding a surgically removed organ and tissue material as part of a game that they likened to “The Price Is Right.”

The doctors, who are employed as medical residents by Spectrum Health in Grand Rapids, Mich., and specialize in obstetrics and gynecology, asked people to guess how much an unidentified organ weighed, according to one of the Instagram posts obtained by the NBC affiliate WOOD-TV.

The station said it blurred part of the image in that post so that people could not tell what type of organ was shown in the post, which was shared publicly.

The posts appeared to show at least one patient in the background, the television station reported. They were taken down shortly after the station contacted the medical residents on Friday.

intense medical debate: Some say it can spread cancer, while others say the procedure is less invasive than alternatives.

The doctor wrote that medical residents could be a little competitive when the attending physician challenged them in morcellation, the station reported.

“Longest one wins!” the station quoted the post as saying. “Good work.”

Arthur Caplan, a professor of medical ethics at the New York University Grossman School of Medicine, said in an interview on Sunday that the social media posts could be grounds for serious disciplinary action against the doctors, possibly resulting in loss of license.

“It certainly is a serious breach of ethics,” he said. “There’s absolutely no excuse for turning something that should be serious and treated with respect into a kind of silly carnival.”

Many patients consider tissue or organs that have been surgically removed to still be part of themselves, especially female reproductive organs, Dr. Caplan said. Posting a photo featuring a patient partly visible in an operating room, he said, crossed a line.

“We try to explain that a key aspect of professionalism is always respect for the patient and understanding that patients have a strong feeling about their bodies and intimacy,” he said.

At least one person complained about the Instagram posts before they were removed.

“And do you think the patient would appreciate you posting this?” the television station quoted the person as saying in a comment below the organ photo. “Did she agree for her body to be displayed on social media as a part of your ‘game’?”

The poshest place in California's Coachella Valley is The Madison Club. This exclusive gated community in La Quinta is where A-listers and tycoons … END_OF_DOCUMENT_TOKEN_TO_BE_REPLACED

KOROPY, Ukraine — Four men tugged at long strips of fabric to lift a coffin out of the gaping hole in the backyard of a small house. They flung the … END_OF_DOCUMENT_TOKEN_TO_BE_REPLACED