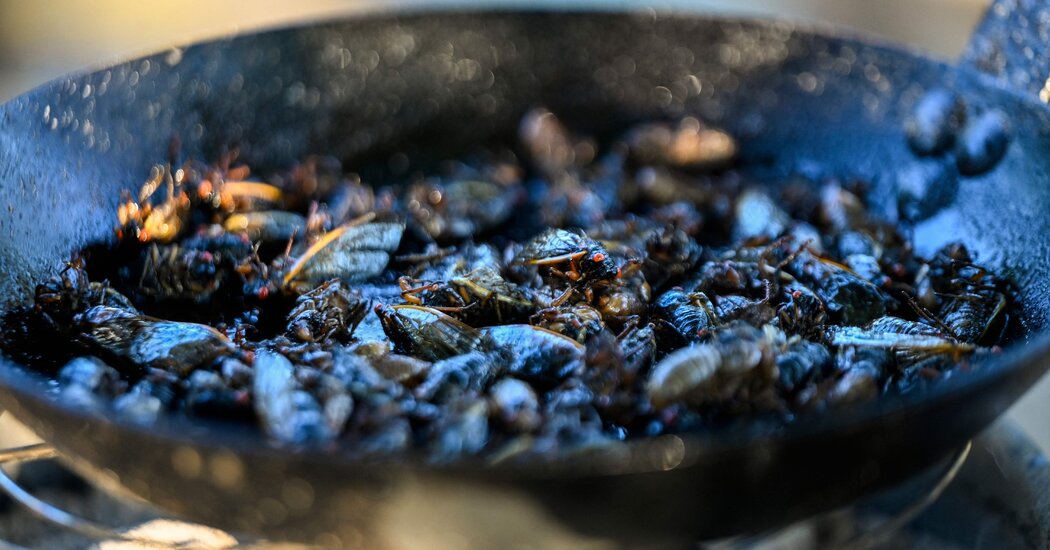 Cicadas are popping up by the billions across the Eastern United States this season, and are subsequently finding their way to the dining tables of adventurous foodies.

But people with a seafood allergy should avoid the crunchy insect, which are related to crustaceans, federal health officials warned on Wednesday.

known as Brood X, emerges from the ground on its regular 17-year cycle. The shrimp-sized, beady-eyed bugs with almost translucent wings are being prepared by professional chefs and at home in a variety of ways this year.

deep fried and others like them tossed into their Caesar salad. Bun Lai, the chef of a sustainable sushi restaurant in Connecticut, will present them in a fine-dining experience at his farm. And Frank’s RedHot, the 100-year-old hot sauce brand, released a string of cicada recipes including: caramel ’cada corn, chili lime ’cada tacos and a cicada “parm” slider.

Cicadas, which do not bite or sting and are not toxic, are also eaten by predators including birds and small mammals. They are gluten-free, high in protein, low in fat and low in carbohydrates, according to National Geographic.

But insects and crustaceans belong to the arthropod family. And according to a report from the Food and Agriculture Organization of the United Nations, the potential allergenic risks associated with edible insects needed further investigation.

People with existing allergies to crustaceans may develop allergic reactions to edible insects, which contain similar proteins, the report said.

The cicadas, whose quantities could reach tens of billions, are expected to appear in about 18 states for about six weeks. The Washington, D.C., area, Indiana and around Knoxville, Tenn., are the three Brood X cicada epicenters around the country.

While cicadas are generally not harmful to humans, the sharp buzz they make when looking for mates can be annoying.

The chance to feast on cicada dishes won’t last forever. Once the insects have mated and their eggs hatch, the developing cicadas, known as nymphs, will begin their 17-year cycle, feeding underground.

The next opportunity to feast on fresh Brood X cicadas will be in 2038.

Editor’s Note: This story is part of As Equals, CNN’s ongoing series on gender inequality. For information about how the series is funded and more, … END_OF_DOCUMENT_TOKEN_TO_BE_REPLACED

IdentityForce, a service from the credit bureau TransUnion, monitors your personally identifiable information (PII) so you don’t have to do it … END_OF_DOCUMENT_TOKEN_TO_BE_REPLACED