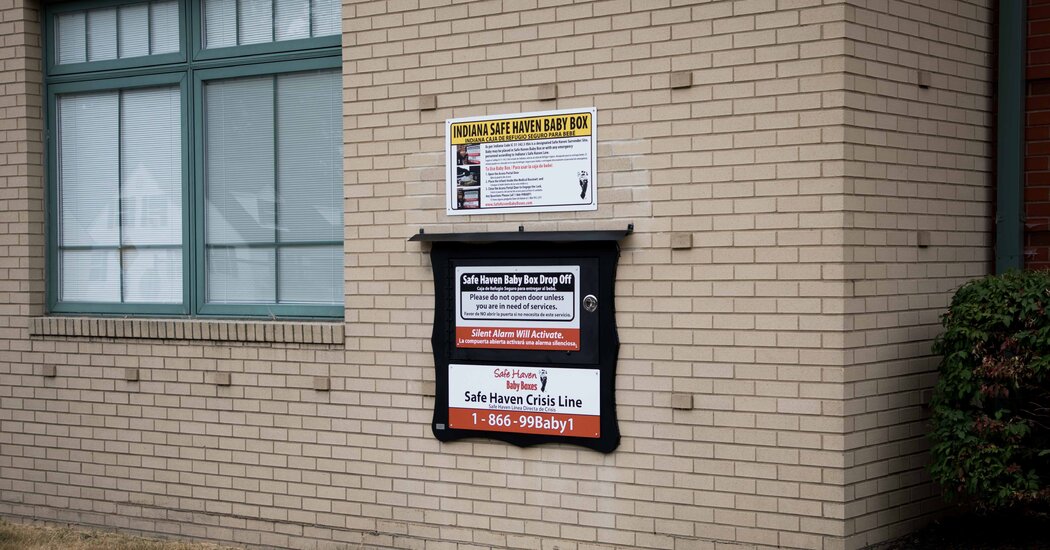 The Safe Haven Baby Box at a firehouse in Carmel, Ind., looked like a library book drop. It had been available for three years for anyone who wanted to surrender a baby anonymously.

No one had ever used it, though, until early April. When its alarm went off, Victor Andres, a firefighter, opened the box and found, to his disbelief, a newborn boy wrapped in towels.

The discovery made the local TV news, which praised the courage of the mother, calling it “a time for celebration.” Later that month, Mr. Andres pulled another newborn, a girl, from the box. In May, a third baby appeared. By summer, three more infants were left at baby box locations throughout the state.

Studies show that the vast majority of women denied an abortion are uninterested in adoption and go on to raise their children.

But the safe haven movement has become much more prominent, in part because of a boost from a charismatic activist with roots in anti-abortion activism, Monica Kelsey, founder of Safe Haven Baby Boxes.

With Ms. Kelsey and allies lobbying across the country, states like Indiana, Iowa and Virginia have sought to make safe haven surrenders easier, faster and more anonymous — allowing older babies to be dropped off, or allowing relinquishing parents to leave the scene without speaking to another adult or sharing any medical history.

Some who work with safe haven children are concerned about the baby boxes, in particular. There are now more than 100 across the country.

research found that more than half the children have health or developmental issues, often stemming from inadequate prenatal care. In California, unlike in Indiana, safe haven surrenders must be done face-to-face, and parents are given an optional questionnaire on medical history, which often reveals serious problems such as drug use.

Still, many children do well. Tessa Higgs, 37, a marketing manager in southern Indiana, adopted her 3-year-old daughter, Nola, after the girl was dropped off at a safe haven just hours after her birth. Ms. Higgs said the biological mother had called the Safe Haven Baby Box hotline after seeing one of the group’s billboards.

“From day one, she has been so healthy and happy and thriving and exceeding all developmental milestones,” Ms. Higgs said of Nola. “She’s perfect in our eyes.”

pointed to research showing that over the long term, birth parents feel more satisfied about giving up their children if biological and adoptive families maintain a relationship.

reclaim custody of their children. Such cases can take months or even years to resolve.

Birth mothers are also not immune from legal jeopardy, and may not be able to navigate the technicalities of each state’s safe haven law, said Lori Bruce, a medical ethicist at Yale.

While many states protect surrendering mothers from criminal prosecution if babies are healthy and unharmed, mothers in severe crisis — dealing with addiction or domestic abuse, for example — may not be protected if their newborns are in some way affected.

The idea of a traumatized, postpartum mother being able to “correctly Google the laws is slim,” Ms. Bruce said.

With the demise of Roe, “we know we are going to see more abandoned babies,” she added. “My concern is that means more prosecutors are going to be able to prosecute women for having unsafely abandoned their children — or not following the letter of the law.”

On Friday, the Indiana governor signed legislation banning most abortions, with slim exceptions.

Ms. Higgs, the adoptive mother, has stayed in touch with Monica Kelsey of Safe Haven Baby Boxes. “The day that I found out about Roe v. Wade, I texted Monica and was like, ‘Are you ready to get even busier?’”

MIAMI — The morning after Hurricane Ian slammed into Florida, Gov. Ron DeSantis shared the podium at his news briefing with two people: his emergency … END_OF_DOCUMENT_TOKEN_TO_BE_REPLACED

SHERMAN OAKS, Calif.--(BUSINESS WIRE)--When it comes to choosing a property management company, the size of a company often becomes a sticking point … END_OF_DOCUMENT_TOKEN_TO_BE_REPLACED