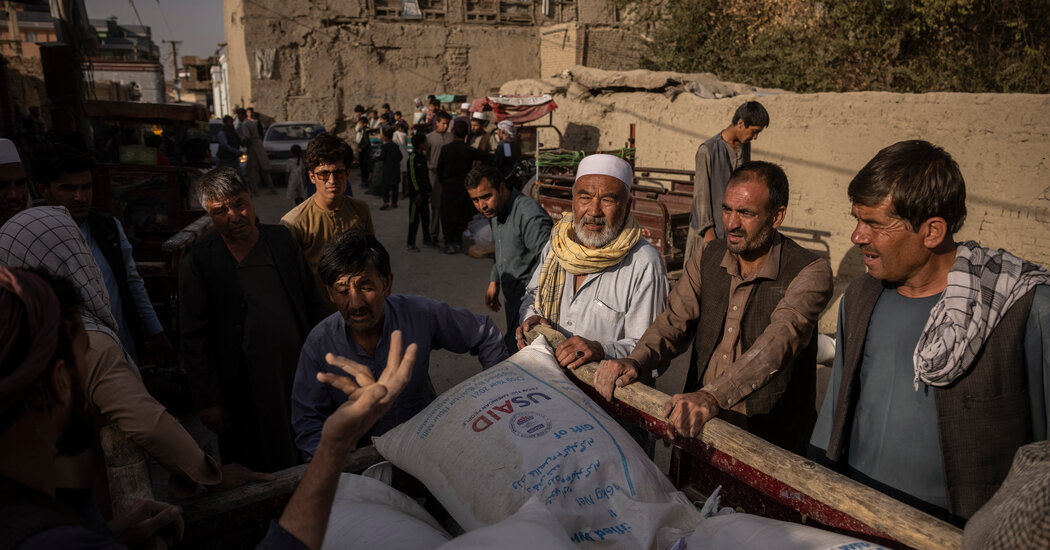 WASHINGTON — World leaders met virtually on Tuesday to discuss ways of preventing an economic and humanitarian disaster in Afghanistan, but the Biden administration maintained a cautious stance toward providing more support to the Taliban-ruled country.

The European Union pledged $1 billion euros, or $1.15 billion, in aid to Afghanistan and to neighboring countries, as Group of 20 leaders separately affirmed their support for human rights and stability in the country.

“We must do all we can to avert a major humanitarian and socio-economic collapse in Afghanistan,” Ursula von der Leyen, the president of the European Commission, said in a statement. “We need to do it fast.”

After two meetings with Taliban officials over the past few days, however, the Biden administration did not announce any new American aid for the country as it navigates its approach to an Afghan government run by a group that battled the United States for nearly 20 years.

In addition to the Group of 20 meeting, officials from the United States and several European nations met with Taliban representatives in Doha in what the European Union described as “an informal exchange at a technical level” that did not constitute recognition of the Taliban as a legitimate government.

E.U. pledge includes 300 million euros for humanitarian aid already announced, along with another 250 million to provide additional support to those “in urgent need, notably in the field of health,” Ms. von der Leyen said.

The money will go to international organizations already working in Afghanistan, as has recent U.S. aid.

The new Taliban government has generally cooperated with U.N. aid agencies, António Guterres, the U.N. secretary general, said on Tuesday, and has “progressively granted access to the areas requested and provided security when needed.”

Although the Taliban kidnapped and murdered foreign aid workers during their two-decade insurgency, they have a keen interest in placating the international community now that they are in power, as they hope to win diplomatic recognition and direct economic support to rebuild an impoverished country gutted by decades of war.

Prime Minister Mario Draghi of Italy, who hosted the Group of 20 meeting, called it “the first multilateral response to the Afghan crisis.” Speaking at a news conference at the end of the meeting, he added, “Multilateralism is returning.”

Mr. Draghi said the leaders’ discussions had moved beyond blame for the fall of Afghanistan’s capital, Kabul, an issue he said dominated last month’s U.N. General Assembly gathering, to the question of humanitarian relief. “At least this one allows us to overcome the inevitable differences in points of view,” he said.

Mr. Draghi said that providing aid required talking to — but not formally recognizing — the Taliban.

“There is no alternative to having contacts with them,” he said. “They are essential for this response to be effective.”

Joe Burrow #9 of the Cincinnati Bengals against the Tennessee Titans during the AFC Divisional Playoff at Nissan Stadium on January 22, 2022 in … END_OF_DOCUMENT_TOKEN_TO_BE_REPLACED