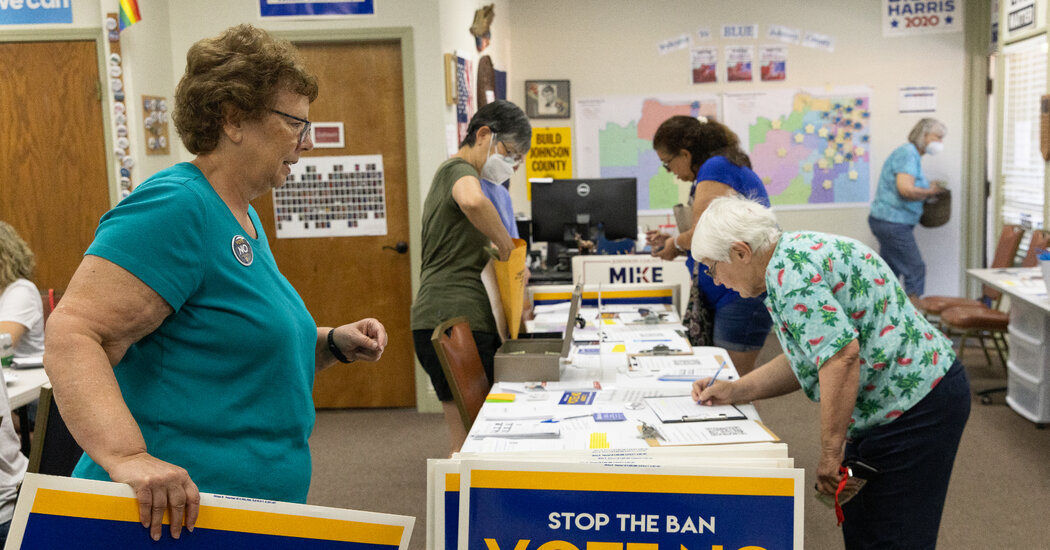 A number of other organizations on each side of the issue have separately campaigned and raised money on the amendment.

After the Supreme Court decision, a lot more people suddenly became aware of the amendment, said Melinda Lavon, a midwife who has been helping organize a vote-no campaign, including text-messaging blitzes and events in rural areas. “People had a lot of emotions about it, and they put it to good use.”

John Markert, who supports the amendment, said that he was pleased with the U.S. Supreme Court ruling but was not sure it would help his side in the vote. Along the route where he bicycles several times a week in Lenexa, another Kansas City suburb, more yard signs have been popping up on each side of the issue.

“It threw everything to the forefront,” said Mr. Markert, who was retired from the mortgage business and who said his opposition to abortion in almost all cases was informed by his Christian faith. “If Roe versus Wade would not have been overturned, I think the ‘Vote Yes’ would have been” more likely to prevail. He added: “I don’t know if it is now.”

As Election Day approaches, rhetoric has grown heated. Campaign signs on both sides have been stolen or destroyed, police and organizers say. In the Kansas City suburb of Overland Park, vandals targeted a Catholic church this month, splattering buildings and a statue of Mary with red paint, an episode the police linked to the abortion debate.

Twice in recent weeks, someone tore down signs supporting the amendment at Faith Baptist Church in Salina, Kan., said a pastor, Jesse Rowland. A third sign has been placed in the churchyard.

“It’s kind of more trench warfare — everybody is dug in on one side or the other,” Mr. Rowland said. “Nobody’s talking, really, from what I’ve observed.”

Whether you optimistically hope that mortgage rates will decline or are resigned that rates will stay elevated above the historic lows of 2021, you … END_OF_DOCUMENT_TOKEN_TO_BE_REPLACED

A resident of Nikopol, Ukraine, in her backyard last month, with smoke rising from an area on the opposite bank of the Dnipro River. Credit...David … END_OF_DOCUMENT_TOKEN_TO_BE_REPLACED