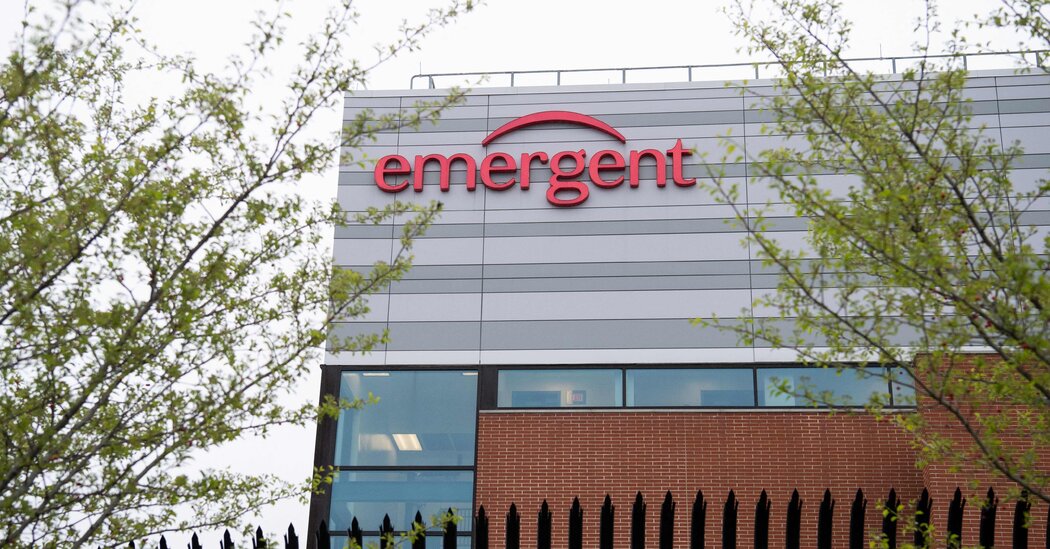 WASHINGTON — The federal government has canceled its contract with a troubled Covid-19 vaccine manufacturer that ruined millions of doses and had to halt production for months after regulators raised serious quality concerns.

The decision marks a stark reversal of fortune for the politically connected contractor, Maryland-based Emergent BioSolutions, and an abandonment by the government of a deal that was supposed to be a centerpiece of Operation Warp Speed.

Early in the pandemic, the government decided to bank on the company to be the sole domestic manufacturer of the Johnson & Johnson and AstraZeneca vaccines. But this March, testing found that a batch of the Johnson & Johnson vaccine had been contaminated, and Emergent agreed to pause manufacturing after an inspection uncovered a host of problems at its facility in Baltimore’s Bayview area.

The termination of the contract, disclosed on Thursday by Emergent executives during a call with investors, was the result of negotiations that began after the government earlier this year stopped making payments under the deal, which was awarded in May 2020 and was worth more than $600 million. Emergent will now forgo roughly $180 million of that amount, according to company disclosures.

The Baltimore Sun that the health department had agreed to Emergent’s “request to end our 9-year pandemic manufacturing partnership.”

Mr. Kramer laid blame on the government, even as he conceded that “not everything went perfectly” during the pandemic. “But if you want companies to engage,” he wrote, “you need to be willing to stand by them through both challenge and achievement.”

a government assessment warned that relying on the largely untested facility was risky.

Mr. Kramer on Thursday said a lack of experience at the factory was attributable in large part to a lack of consistent government funding over the years. “The necessary operational investments by all administrations fell short of what was needed to maintain capability in case of an emergency,” he said.

Since May, Emergent has said it expected federal regulators to soon certify vaccine production at the Baltimore plant. But regulators have yet to issue that certification, although they have certified Johnson & Johnson’s manufacturing operation in the Netherlands as well as plants that produce vaccines for Pfizer-BioNTech and Moderna vaccines.

Instead of giving the Bayview plant a green light, the F.D.A. cleared multiple batches of AstraZeneca’s and Johnson & Johnson’s vaccines — and then only after special scrutiny, because of the plant’s problems. A batch can include as many as 15 million doses.

Although Johnson & Johnson, one of only three federally authorized vaccines here, produced tens of millions of doses at the Baltimore plant, it did so under a separate contract with Emergent as its subcontractor.

delaying the distribution of vaccines in Canada, the European Union and South Africa.

Executives emphasized during Thursday’s call that the cancellation would not affect the other government contracts that remain the core of Emergent’s business. In fact, the company noted, health officials this year committed to purchasing another $637 million worth of Emergent’s anthrax and smallpox products in coming months.

The company also disclosed that Mary Oates, a former Pfizer executive who joined Emergent in November 2020 as a senior vice president overseeing manufacturing quality, was leaving “to pursue a new career opportunity.”

In September, Emergent announced that it had reached a five-year agreement with Providence Therapeutics, a Canadian biotechnology company that specializes in mRNA vaccine therapies, to support that company’s Covid-19 mRNA vaccine development.

“Emergent’s commitment to fight the Covid-19 pandemic is anchored in our partnerships with innovators who share the same mission to address public health threats around the world,” Adam R. Havey, the company’s executive vice president and chief operating officer, said in a statement at the time.

AUSTIN, Texas--(BUSINESS WIRE)--As the first multifamily management company to be recognized in the Public Relations and Marketing Excellence Awards, … END_OF_DOCUMENT_TOKEN_TO_BE_REPLACED

There have been whispers of cooling housing and rental prices in the San Francisco Bay Area, but that hasn't yet translated into practical, noticeable … END_OF_DOCUMENT_TOKEN_TO_BE_REPLACED

Cars pass in Independence Square at twilight in Kyiv, Ukraine, Monday, Oct. 31, 2022. Rolling ... [+] blackouts are increasing across Ukraine as the … END_OF_DOCUMENT_TOKEN_TO_BE_REPLACED