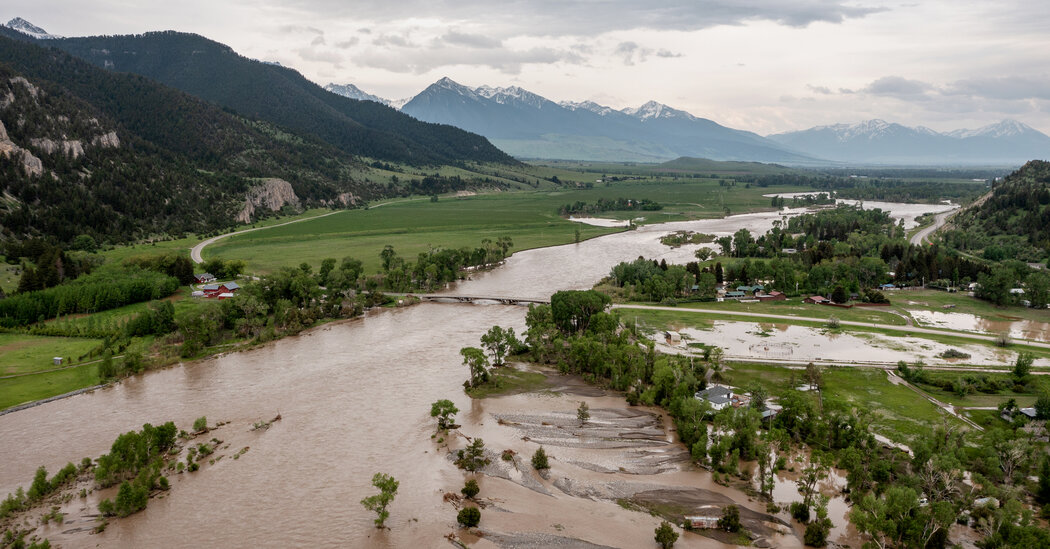 GARDINER, Mont. — Before evacuating their rental cabin on the edge of Yellowstone National Park, the Manning family watched a nearby house plunge from the riverbank into the raging, flood-swollen waters.

“The earth off the bank was coming off in sheets,” said Parker Manning, who had traveled from Terre Haute, Ind., to Yellowstone with his family for a summer vacation.

“It was crazy when the house, when the building, finally hit the water,” Mr. Manning said. “It was floating down the river like a boat.”

423 national parks, which are particularly vulnerable to rising temperatures.

The litany of threats read like a biblical reckoning: fire and flood, melting ice sheets, rising seas and heat waves.

Rangers in Glacier National Park in Montana are counting down the years to when the park will have no glaciers left.

killed 1.3 million trees, leaving the park management to describe one area as “a graveyard of Joshua tree skeletons.”

Severe Weather in the U.S.

Climate change has increased temperatures across the United States. But because so many national parks are at high elevations, in the arid Southwest or in the Arctic, they are being disproportionately affected by global warming. A 2018 study found that temperatures in national parks are rising at twice the rate as the country as a whole.

“Every single one of our more than 400 national parks are suffering,” said Stephanie Kodish, the director of the climate change program at the National Parks Conservation Association, a nonprofit and nonpartisan advocacy group.

Ms. Kodish said the culprit of the extreme weather was in most cases clear: Human-caused temperature rises are destroying the very places that Americans saw as the pristine escapes from the traffic-clogged and built-up landscapes of their daily lives.

“We are literally making a choice to wipe out these things that are gems of our world, that are gifts for us to pass down,” she said.

The National Park Service is experimenting with ways of adapting to the changing climate. The federal infrastructure bill passed last year has $1.7 billion for national parks, which includes money for climate mitigation projects like relocating trails from flood zones. Other efforts include Glacier National Park biologists relocating bull trout to lower-temperature waters and staff members in Joshua Tree National Park clearing brush and invasive species from cooler or wetter areas that are more likely to sustain Joshua trees. In Yosemite, rangers are thinning forests to reduce the risk of wildfire.

Americans, she said, could change their everyday decisions to combat climate change and protect parks: Dry laundry on a clothesline instead of a dryer. Take public transportation. Urge their local representatives to move the country away from fossil fuels and toward renewable energy.

This week’s flooding will cut off the northern reaches of the park, one of the nation’s most-visited natural wonders, to tourists for the rest of the busy summer travel season. And officials warned that more rain and flooding could be on the way.

sprawls across more than two million acres in the northwest corner of Wyoming and into Montana and Idaho. In 2021, more than 4.8 million people visited, a significant increase over previous years.

The storm that caused the flooding and mudslides this week began with two to three inches of rain over the weekend. Combined with warming temperatures that melted 5.5 inches of snow, the rain created the flood.

Hundreds of homes were flooded in communities north of the park in Montana, including Gardiner and Cooke City, which were also cut off from supplies of food and clean water, officials said. Floodwaters knocked out the water plant in the state’s largest city, Billings, leaving less than two days of supplies for residents. On Wednesday, Montana’s lieutenant governor requested a presidential major disaster declaration.

Ominously, some forecasts suggest more warmth and rain in four to five days, even as another foot of snow remains on Yellowstone’s mountains, raising the possibility of yet another series of floods, Mr. Sholly said.

Bill Berg, one of three commissioners in Park County, Mont., said he feared that a number of hotels and restaurants in the area might go out of business with the park’s northern entrance closed for the season. Summer is when most businesses make the bulk of their money, he said.

He said this week’s flooding was by far the worst he had seen in 50 years living in the area. He watched as the river swelled and carried full-grown trees downstream. On Wednesday, standing on the river’s edge, he gave an inventory of the debris left behind: piles of logs, pillows, toys, cabinets and a solitary cross-country ski.

“It was ripping and roaring,” he said from his home in Gardiner. “Mother Nature, she don’t mess around.”

AUSTIN, Texas--(BUSINESS WIRE)--As the first multifamily management company to be recognized in the Public Relations and Marketing Excellence Awards, … END_OF_DOCUMENT_TOKEN_TO_BE_REPLACED

There have been whispers of cooling housing and rental prices in the San Francisco Bay Area, but that hasn't yet translated into practical, noticeable … END_OF_DOCUMENT_TOKEN_TO_BE_REPLACED

Cars pass in Independence Square at twilight in Kyiv, Ukraine, Monday, Oct. 31, 2022. Rolling ... [+] blackouts are increasing across Ukraine as the … END_OF_DOCUMENT_TOKEN_TO_BE_REPLACED