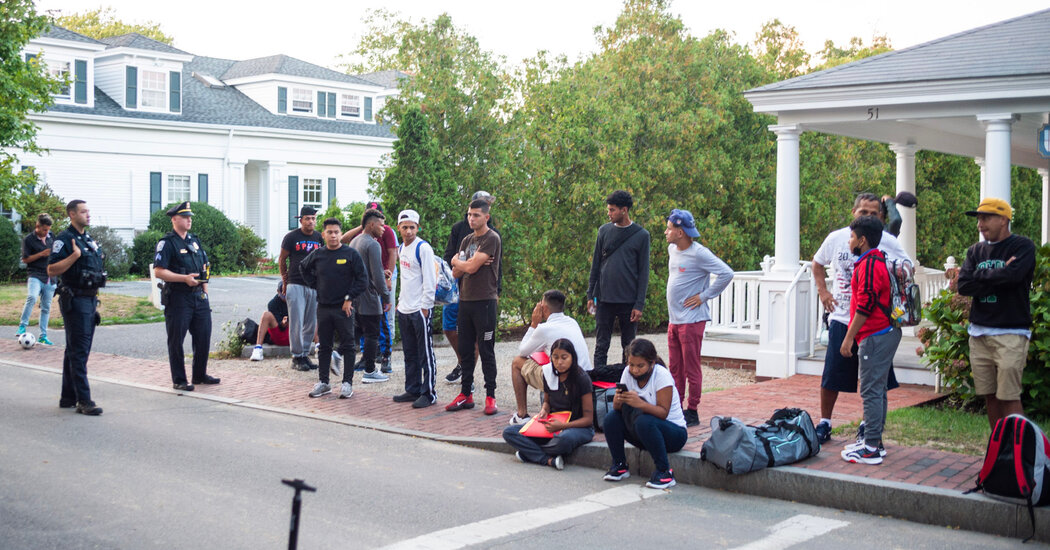 While Martha’s Vineyard is known as the summer destination for the rich and powerful — President Barack Obama and John Kerry have homes there — the island faces a shortage of affordable housing, with the median home price at about $1 million. The migrants are also arriving just at the end of the summer season, when seasonal work has ended.

“There are literally no jobs in the winter, and there is no affordable housing on Martha’s Vineyard,” Ms. Rush said. “The bulk of people that work a lower- to middle-income job live off island and commute.”

She said local community groups, churches and restaurants were all pitching in. Among the volunteers was Sergio Racig, a property manager who went to the church to help translate. “Some of them were tortured by the Mexican cartel — some very, very bad things happened to them,” he said, adding, “They are happy to see all the support from the island.”

Mr. DeSantis, a Republican with presidential ambitions, has repeatedly bashed the federal government for transporting migrants to Florida and has threatened to send them to liberal enclaves instead. He has frequently mentioned Mr. Biden’s home state of Delaware as a possible destination.

Mr. DeSantis’s lieutenant governor, Jeanette M. Núñez, a Cuban American, faced political heat last month from Democrats in Miami, her hometown, when she said in a Spanish-language radio interview that Cuban migrants illegally crossing the border from Mexico should be bused out of state.

The Florida governor told reporters last month that the state had not yet relocated migrants because a similar program in Texas had “taken a lot of pressure off us.” Texas has sent at least 6,200 migrants to the nation’s capital this year, but the governor’s office there said on Wednesday that it had not been involved in the transportation to Martha’s Vineyard.

Mr. Cyr, the Massachusetts state senator, criticized the motive behind the flights. “This is a cruel ruse that manipulates families that are seeking a better life,” he said, adding, “Our community has been targeted, clearly.”

MIAMI — The morning after Hurricane Ian slammed into Florida, Gov. Ron DeSantis shared the podium at his news briefing with two people: his emergency … END_OF_DOCUMENT_TOKEN_TO_BE_REPLACED

SHERMAN OAKS, Calif.--(BUSINESS WIRE)--When it comes to choosing a property management company, the size of a company often becomes a sticking point … END_OF_DOCUMENT_TOKEN_TO_BE_REPLACED