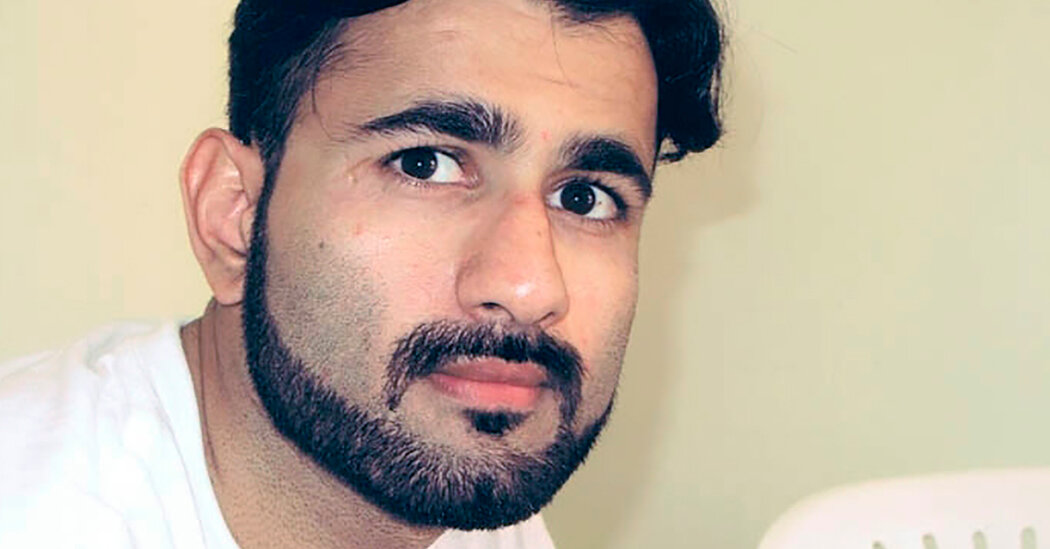 He received beatings while nude and spent long stretches in chains — at times shackled to a wall and crouching “like a dog,” he said, or with his arms extended high above his head and chained to a beam inside his cell. He was kept in darkness and dragged, hooded and shackled, his head slamming into floors, walls and stairs as he was moved between cells.

Before the C.I.A. moved him from one prison to another, he said, a medic inserted an enema and then put him in a diaper held in place by duct tape so he would not need a bathroom break during flights. Guards moving him would hood him, aside from the time he had his face duct taped.

While held in a Muslim country, he said, his captors allowed him to pray. But at times the Americans did not.

Earlier accounts released by his lawyers said he was so sleep deprived for a time that he began to hallucinate. He described the experience: images of a cow and a giant lizard advancing on him inside a cell while he was chained to a beam above his head. He tried to kick them away but lost his balance, causing his chains to jerk him.

Mr. Khan gained attention with the release of a 2014 study of the C.I.A. program by the Senate Intelligence Committee that said, after he refused to eat, his captors “infused” a puree of his lunch through his anus. The C.I.A. called it rectal refeeding. Mr. Khan called it rape.

The C.I.A. pumped water up the rectum of prisoners who would not follow a command to drink. Mr. Khan said this was done to him with “green garden hoses. They connected one end to the faucet, put the other in my rectum and they turned on the water.” He said he lost control of his bowels after those episodes and, to this day, has hemorrhoids.

He spoke about failed and sadistic responses to his hunger strikes and other acts of rebellion. Medics would roughly insert a feeding tube up his nose and down the back of his throat. He would try to bite it off and, in at least one instance, he said, a C.I.A. officer used a plunger to force food inside his stomach, a technique that caused stomach cramps and diarrhea.

I expect mortgage rates to rise modestly in December, especially toward the end of the month. As we approach the end of 2021, bond traders will cash … END_OF_DOCUMENT_TOKEN_TO_BE_REPLACED